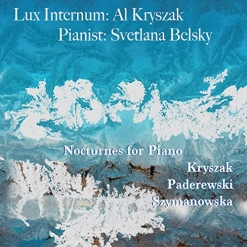 Svetlana's Website Svetlana's Artist Page on MainlyPiano
Album Links
Amazon (referral)Apple/iTunesSpotify
This site contains affiliate links to products. We may receive a commission for purchases made through these links.
Lux Internum
Svetlana Belsky
2020 / FilmTrax Ltd.
53 minutes
Review by Kathy Parsons
Lux Internum is a fascinating collection of nocturnes for solo piano by three Polish composers. The album is named for a group of twelve pieces that bear that title by contemporary composer Al Kryszak and the other two are nocturnes by Ignacy Paderewski (1860-1941) and Marie Szymanowska (1789-1831).

Al Kryszak is a composer, filmmaker, pianist and guitarist based in Maine who has composed music for a number of Turner Classic films as well as silent films from the early 1900s. He has released an intriguing variety of recordings - everything from Lullabies For People Who Don’t Need Sleep to soundtracks to Having An Atonal Christmas. The title for Lux Internum translates as “Internal Light” and refers to “the last region of a person’s soul in soulless times; light not visible because it lies in wait for the need.” (quoted from the liner notes of the CD.) Kryszak has also worked for and with Lincoln Center, American Festival of Microtonal Music, Mabou Mines, June-in Buffalo, Symphony Space, LA Directors Guild, and KINO.

The music is performed by Dr. Svetlana Belsky, an award-winning pianist who has toured and performed all over the world as well as recording a varied group of solo and duo albums, and previously serving as the Director of the Piano Program at the University of Chicago. A passionate and articulate artist, she is the recipient of the 2019 American Prize in Piano Performance and Silver Medals from the 2019 Global Music Awards. She was awarded the Outstanding Woman Award for Excellence in Music and Theater Arts by the Clerk of Cook County District Court to commemorate Women’s History Month in 2019. In recent years, she has introduced compositions by no fewer than a dozen living composers. She also appears regularly as part of the EStrella Piano Duo and Pianissimo!, an all-women four-piano ensemble. Dr. Belsky was born in the former Soviet Union, but was trained mostly in the US. She studied at the Music Institute of Chicago, received her Bachelor and Master Degrees from the Peabody Conservatory, and earned her Doctorate in Performance at the Manhattan School of Music.

The twelve pieces from Lux Internum vary widely, but most of them tend to be on the dark, atonal side. Dr. Belsky explains: “I was immediately attracted to the complexity of Alan Kryszak’s music: harmonic, textural and rhythmic. His inner light is irresistibly multi-faceted and often ambiguous, and profoundly human.” That depth of understanding runs throughout the music, which comes to life via Dr. Belsky’s very expressive and expansive performance. The music can be challenging to listen to at times, but it takes us on an interesting musical journey that combines elements of modern classical, experimental and rock music as well as Kryszak’s work in film scoring and film making.

The last two tracks on the album are very different from the first twelve even though they are also nocturnes. Paderewski’s Nocturne, Op. 16 No. 4 is much more melodic and traditionally-structured with a mix of quieter, lyrical passages and sections that are more powerful and dramatic.

I discovered Marie Szymanowska’s Nocturne in Bb Major in anthology of music by women composers probably close to thirty years ago and fell in love with it. I had never heard it played by anyone but myself, so it is a real treat to hear Dr. Belsky’s performance of the piece! (She plays it a bit better than I do!!!) Szymanowska was composing and performing before Frederic Chopin (1810-1849), who is probably the best-known composer of nocturnes, and I’d say that her influence on the younger composer is obvious. Anyway, I really love this piece!

Lux Internum is available from several different sites including Amazon, Apple/iTunes and Spotify.
November 18, 2020
This review has been tagged as:
ClassicalLatest ReviewsModern Classical
Svetlana's Website Svetlana's Artist Page on MainlyPiano
Album Links
Amazon (referral)Apple/iTunesSpotify
This site contains affiliate links to products. We may receive a commission for purchases made through these links.
More reviews of Svetlana Belsky albums 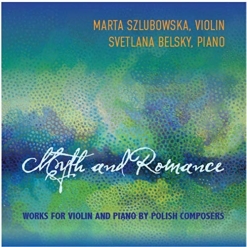 Myth and Romance
with Marta Szlubowska
2019 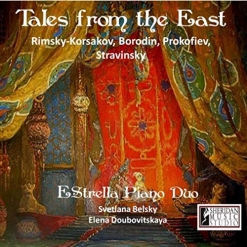 Tales From the East
2018
(contributing artist)