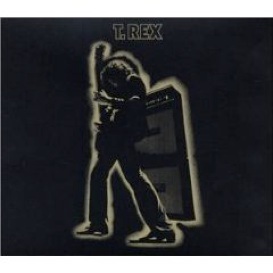 T. Rex's Website T. Rex's Artist Page on MainlyPiano
Album Links
iTunes
This site contains affiliate links to products. We may receive a commission for purchases made through these links.
Electric Warrior
T. Rex
2001 / A&M Records
69 minutes
Review by Michael Debbage
This is the 30th Anniversary digitally re-mastered version of one of two gems that Marc Bolan released during his T. Rex electrical evolution. A capricious artist, when Marc Bolan was on, he was fantastic. This album along with The Slider is probably one of his finest moments. And 30 odd years later, many critics continue to include this particular album as part of their Top 100 albums of all time. A revisit of this album is a testimony to the durability of Electric Warrior.

While the obvious highlight is the huge American hit “Get It On,” re-titled “Bang A Gong” stateside, there are other strong upbeat moments. Check out the UK hit “Jeepster” or the grueling “Rip Off,” with a great sax solo by Ian Mc Donald of King Crimson and Foreigner fame which closes the original album. Or perhaps you can skip back to the bare boned yet funky “The Motivator” or the bluesy “Lean Woman Blues.” On the flip side, there are the reflective mellow tracks that he was capable of bringing to the table. “Cosmic Dancer,” “Girl,” and the magical “Life’s A Gas,” were very fine examples of his songwriting ability. It certainly did not hurt to have producer Tony Visconti on board who fleshed out his sound with strings and harmonious vocal arrangements. It could be said that Visconti was as important to the T. Rex production as George Martin was to the Beatles. His last heavy involvement with T. Rex was the album Tanx and that album marked the beginning of the end. While the above songs represent the upbeat and mellow meanderings of Bolan, the mid- tempo songs “Monolith” and “Planet Queen” should not go unmentioned. While they do not standout as significantly as those mentioned earlier, they round out the album nicely.

So what is the “special” in special edition? The re-mastered album includes eight bonus tracks that are referred to as works in progress. This does not infer useless material or horrendous production but perhaps a more basic track that is beginning to show the foundation of the finished product. In fact it is quite enjoyable to be part of the tracks’ early development. Of interest is the discussion between the band members and the production team as they bounce ideas off each other. Bolan is even jocular at times as demonstrated via the opening discussion of the “Monolith,” “Planet Queen,” and “The Motivator,” bonus tracks. It is also a big plus to have extensive liner notes from the original producer Tony Visconti, who went on to produce David Bowie and Thin Lizzy’s Live & Dangerous. Tony also completed the digital re-mastering here. Supplemented with rare photography and artwork, the liner notes only add to the celebration.

The one downside is the lack of lyrics that were made available on the original album. And considering the amusing cosmic and nonsensical lyrics of Marc Bolan, this was an oversight that should have been avoided. With this exception, it is a great way to celebrate the 30th Anniversary of Electric Warrior. The album was a major initial ingredient to the glam rock scene but was not buried in the trend. In fact, it remains charming yet contemporary 30 years later. This is the mark of a great album.
November 11, 2001
This review has been tagged as:
Ageless Favorites
T. Rex's Website T. Rex's Artist Page on MainlyPiano
Album Links
iTunes
This site contains affiliate links to products. We may receive a commission for purchases made through these links.