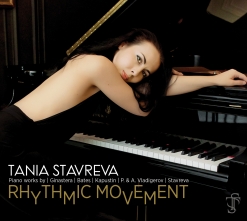 Tania's Website Tania's Artist Page on MainlyPiano
Rhythmic Movement
Tania Stavreva
2016 / Tania Stavreva Music, LLC
44 minutes
Review by Kathy Parsons
Rhythmic Movement is the debut album by classical pianist/composer Tania Stavreva. Subtitled “A Classical Album With A Modern Edge,” it consists of fourteen dynamic tracks, two of which are original compositions. Some of the music is from Stavreva’s native Bulgaria, some is from Argentina, and one piece is American. Although all of the music is considered to be classical, Stavreva imbues much of it with a jazzy edge that sometimes suggests a rock influence. Her performance is dazzling, with jaw-dropping technique, precision, and a palette of brilliant tonal colors. In the liner notes of the album, Stavreva describes Rhythmic Movement: “This album is part of my heart; a reflection of where I am in my life’s journey as an artist. The works included here were written by composers from three continents and to me, these pieces are bursting with passion for life, inspiration and positive energy! This is what I wish to be surrounded by and what I strive to impart to the world through my music!”

Although most of the music is very demanding, Stavreva plays with a lively and passionate spirit, often conveying the feeling of having fun with the material. I was delighted to read that she has been known to play in rock clubs to make classical music more accessible to younger and non-traditional audiences. She has graced many classical music strongholds such as the main stage of Carnegie Hall, Lincoln Center and Steinway Hall as well as an impressive list of venues around the world. She is currently based in New York.

Rhythmic Movement was released in early 2017 and immediately reached the Billboard Classical Top 10 at #8. The album has earned an impressive list of awards and nominations, and very deservedly so. Bursting with energy and with chops to burn, Tania Stavreva just might be able to reignite a bigger interest in classical music - especially with young people.

The album begins with the title track, which Tania Stavreva composed for a musical theater production. It was originally slower and shorter, but evolved into a solo piece with a powerful drive that sets the exciting tone for the album. “Ratchenitza” is a traditional Bulgarian dance composed by Bulgarian composer Pancho Vladigerov. Bright, percussive, and very quick it all but dances out of the music player! “Mouvement Rhythmique” was also composed by Vladigerov, and the title reflects the influence of of the French Impressionists on his earlier work. Argentinian composer Alberto Ginastera also has several of his works included on this album. The first is a set of three Argentinian dances, including the elegant and graceful “Danza de la Moza Donosa (Dance of the Beautiful Maiden),” a gorgeous piece that shows a more subdued side to Stavreva’s playing. “Ruvido ed Ostinato (Rough and Ostinato),” also by Ginastera, continues to build on the intensity of the music. Nikolai Kapustin’s two Jazz Concert Etudes, “Prelude” and “Toccatina,” are virtuosic with a catchy rhythm that will intoxicate fans of a wide range of genres - breathtaking! “The Dark Side of the Sun” is the second Stavreva composition, and is improvised on the strings inside the piano. The feeling is dark and mysterious with an ominous sense of dread! “White Lies for Lomax” by American Mason Bates was written as a “Blues Fantasy” tribute to ethnomusicologist Alan Lomax. “Dilmano, Dilbero” features Stavreva singing the theme to a popular Bulgarian folk song followed by Alexander Vladigerov’s (Pancho’s son) set of nine solo piano variations on that theme. With a playing time of almost 11 1/2 minutes, these variations clearly demonstrate the versatility of both the composer and the performer. The last piece on the album, “Ritmico y Distorsionado,” is from Ginastera’s “Ruvido ed Ostinato” and features award-winning Will Calhoun improvising on drums. The duo intentionally distorted certain sections of the piano, hence the change in the title, which translates to “Rhythmic and Distorted.”

Rhythmic Movement is an extraordinary debut by an artist I look forward to hearing more from! It you like modern classical music and/or jazz, music with intensity, passion, and spirit and enjoy exploring new artists, be sure to check out Rhythmic Movement! It is available from CD Baby.
July 17, 2018
This review has been tagged as:
Debut AlbumsKathy's Favorites: 2018Kathy's PicksModern Classical
Tania's Website Tania's Artist Page on MainlyPiano