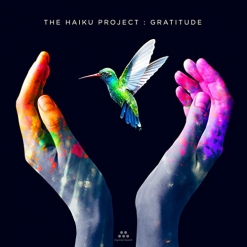 The Haiku Project's Website The Haiku Project's Artist Page on MainlyPiano
Album Links
Amazon (referral)SpotifymyndstreamiTunes/Apple
This site contains affiliate links to products. We may receive a commission for purchases made through these links.
Gratitude
The Haiku Project
2020 / Myndstream
54 minutes
Review by Kathy Parsons
Gratitude is the fifth album from The Haiku Project, the artist name for Danish composer and multi-instrumentalist Henrik Hytteballe. Hytteballe started his career playing with several different rock bands and also composed music for theater, short films and television. He released his first solo album as “haiku” in 2006, with two more following. He describes his style as “melting ambient music and rock,” which really fits the combination of driving rhythms, atmospheric sounds, and quietly evocative melody lines. His 2009 album, flow, was re-released on the Real Music label in 2014 under the artist name of “The Haiku Project.” On Gratitude, instrumentation includes keyboards, guitar, Duduk and cello. The ten tracks are varied and express a range of emotions and experiences, but overall, the album is upbeat and optimistic. Without the strong rhythms, I think Gratitude could easily fall into the ambient genre, but the rock influence and power of the bass and percussion keep the music vibrant and unique. In short, I really like Gratitude and will have to check out some of The Haiku Project’s previous releases, too!

Gratitude begins with “Choices,” one of the more pensive pieces on the album. Driven by electric guitar, keyboard, light percussion and a tinge of melancholy, it’s an intriguing start. “Before Sunset” contrasts a feeling of stillness with a powerful rhythm and a bright sparkle of color. The rhythm becomes the dominating force near the middle of the piece - possibly representing the fiery colors of the sky as the sun starts to go down. The melody resides with the duduk, an ancient double reed woodwind instrument with a haunting sound. “Another Spring” is quite a bit more ambient with a quieter electronic rhythm, an almost mournful electric guitar, strings and keyboard effects. “Wide Open Space” is a favorite. It begins with a subtle electric guitar, duduk and background rhythm, gradually building until the driving energy of the rhythm takes off at a gallop with the keyboard in hot pursuit. That such an odd combination of instruments works so well is reason enough to give this one a listen! I’m dancing in my chair right now! “Rivendell” has a strong beat, but the piece is much calmer and more soothing, suggesting a peaceful respite. I love the dark beauty of “Hummingbirds” despite being puzzled by how the heaviness of the music relates to the weightless little shimmering birds. The deep bass and dark percussion are occasionally countered with bright, magical sparkles from the keyboard, but the piece is mostly the heavier percussion and driving rhythm. Interesting, and a great piece! The piano-based title track is the last one on the album. Strings, light percussion, bass and keyboards fill out the instrumentation. Warmly thoughtful and focusing on the many good things in life, it’s a beautiful close to an outstanding album.

Gratitude is available from Amazon and iTunes/ Apple Music as well as streaming sites like Spotify.
October 7, 2020
The Haiku Project's Website The Haiku Project's Artist Page on MainlyPiano
Album Links
Amazon (referral)SpotifymyndstreamiTunes/Apple
This site contains affiliate links to products. We may receive a commission for purchases made through these links.