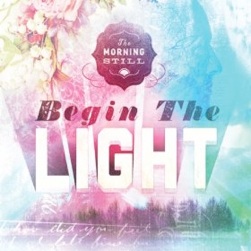 The Morning Still's Website The Morning Still's Artist Page on MainlyPiano
Album Links
Amazon (referral)iTunes
This site contains affiliate links to products. We may receive a commission for purchases made through these links.
Begin the Light
The Morning Still
2013 / The Morning Still Publishing
42 minutes
Review by Kathy Parsons
Begin the Light is the second release from The Morning Still, the recording name for Matthew Hollingsworth. Hollingsworth is an established freelance composer for TV and film who creates custom music for Super Bowl commercials, web videos, feature films and more. He started composing at the piano at the age of six and has received extensive training in “all things musical” including several overseas stints for Master Piano study. The genres of music that resonate most for Hollingsworth are new age and neo-classical, so he created The Morning Still for his more artistic expression and to keep it separate from his commercial work. The music on Begin the Light draws on a variety of styles within the given genres, revealing an exceptional new voice that deserves to be heard. The piano is the primary instrument in the recording, but some of the pieces are more orchestrated and cinematic. What is consistent throughout all twelve compositions is Hollingsworth’s passionate expression and superior musicianship. I’m impressed!

Begin the Light begins with “Aspiration,” a lightly energetic piece for piano and strings that expresses optimism and hope. “Sky Lanterns” is a piano solo that beautifully describes the peaceful grace of these small illuminated hot air balloons floating through the air. The more dramatic “The Sea” is a favorite and expresses the many moods of the ocean, from serene to turbulent. It is mostly solo piano, but there are passages that are given additional tonal color with strings - love it! “The Joy You Bring” is a love song, pure and simple, and although the melody is strong enough to support lyrics, I think it says more without them. “Etoiles dans les cieux” is a gentle solo piano waltz that could have been composed by Chopin - elegant, heartfelt, and very classical. It’s also a favorite! “For Cara” has a very cinematic, Celtic feeling that would be a perfect backdrop to views of sweeping vistas of the countryside or the closing credits of a film. Piano, whistles, and strings are the perfect instruments for this stirring, poignant piece. “Moonflower” goes in a very different direction as a bluesy/gospel-tinged piano solo, showing yet another side of Hollingsworth’s musicality. The bright title track is one of the more-orchestrated pieces, swirling and dancing, becoming calmer, and then rebuilding its momentum before fading out to the end. Also very orchestrated and uplifting, “Believe” brings this excellent album to a close.

The Morning Still is a great find! Begin the Light is available from themorningstill.com, Amazon, iTunes, and CD Baby. Very highly recommended!
February 21, 2016
This review has been tagged as:
Kathy's Picks
The Morning Still's Website The Morning Still's Artist Page on MainlyPiano
Album Links
Amazon (referral)iTunes
This site contains affiliate links to products. We may receive a commission for purchases made through these links.