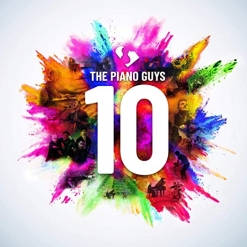 The Piano Guys' Website The Piano Guys' Artist Page on MainlyPiano
Album Links
Amazon (digital)Amazon (CD/DVD)Apple/iTunesSpotifyYouTube page
This site contains affiliate links to products. We may receive a commission for purchases made through these links.
10
The Piano Guys
2020 / Sony Masterworks
107 minutes
Review by Kathy Parsons
A new album from The Piano Guys is always an event, but 10 is a celebration of the ten years the group has been together, looking at where they have been as well as where they are going next. The album is available as a two-disk set (as CDs, for streaming or as a download), and as a “deluxe” three-disk set that includes the two CDs and a DVD. The two CDs include fifteen newly-remastered fan favorites from the past decade and twelve tracks that include brand-new songs and some that have never been released before on CD. Many of the tracks are medleys of two or more pieces, often mixing in bits of classical music. Beethoven’s “Fur Elise” becomes “Fur Elise Jam,” Chopin’s “Raindrop Prelude” is juxtaposed with Selena Gomez’s “Lose You To Love Me,” and Lauren Daigle’s “You Say” is paired with Beethoven’s “Sonata Pathetique” (the 2nd movement), to name only a few. One of the bonus tracks is “Better Days,” written (mostly) and sung by Al van der Beek that tells of his own struggle with COVID-19. The DVD features a collection of some of the amazing videos The Piano Guys have released over the past ten years, some of which are new. (The 3-disk set runs at just under three hours.) To call the album “incredibly varied” only scratches the surface. It showcases the jaw-dropping musicianship of pianist Jon Schmidt and cellist Steven Sharp Nelson and clearly demonstrates why The Piano Guys have become such a musical phenomenon with their videos streamed literally BILLIONS of times.

In addition to their best-selling recordings and breath-taking videos, The Piano Guys have played in sold-out concerts all over the world. Their story begins in a piano store in St. George, Utah called The Piano Guys. Paul Anderson, owner of the store and the first of the “Guys,” was looking for an innovative way to market his pianos. He started a YouTube channel and a Facebook page with the idea of engaging potential customers with entertaining music videos that featured the pianos in his store. Pianist Jon Schmidt literally walked into the store and asked if he could practice on one of the store’s pianos for his concert that night. Paul explained his idea to Jon, who already had a successful solo career going, to see if he would be willing to do a video promoting both his music and the store. Cellist Steven Sharp Nelson had performed with Jon quite a few times and came onboard as well. Steven moved into the same neighborhood as Al van der Beek, who had a recording studio in his home. Steve and Al started writing music together and the new group started recording in his studio. Al became the vocalist, producer and songwriter for the group, and Paul is a producer and videographer. It’s a pretty amazing story about an amazing group that continues to grow and expand their musical horizons while expressing the joys and passions of making music together.

10 is very widely available, including Amazon, Apple Music/iTunes, Spotify and YouTube. If you are a longtime fan, you’ll love the ride, and if you are new to The Piano Guys, this is a great place to start!
December 18, 2020
The Piano Guys' Website The Piano Guys' Artist Page on MainlyPiano
Album Links
Amazon (digital)Amazon (CD/DVD)Apple/iTunesSpotifyYouTube page
This site contains affiliate links to products. We may receive a commission for purchases made through these links.
More reviews of The Piano Guys albums 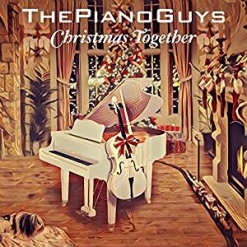