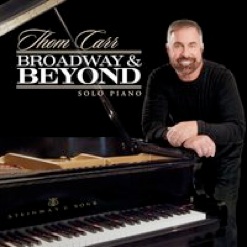 Thom's Artist Page on MainlyPiano
Broadway & Beyond
Thom Carr
2014 / Thom Carr
71 minutes
Review by Kathy Parsons
Broadway & Beyond is a dazzling collection of twenty-three piano solos arranged and performed by Steinway Artist Thom Carr. Based in the Fort Lauderdale, Florida area, Carr is in demand for live performances and is known for his sophisticated pianistic style, versatility, and impressive repertoire. The song selection on Broadway & Beyond demonstrates those qualities and ranges from show tunes, movie and television themes, opera, Gershwin and other standards, a couple of pop songs, and so on. While some of the arrangements are more “showy” than others, the melodies and emotional content of the songs are what get the emphasis. Carr obviously has some spectacular playing chops, but those never overpower the beauty of the music. If you like Danny Wright’s and Gary Clark’s recordings, chances are that you’ll love Thom Carr’s as well.

There are too many tracks to comment on each one, but I’ll do my best to give an overview and mention a few favorites. Gershwin has more songs on this album than any other composer, and those include “Embraceable You,” “Fascinating Rhythm” (favorite!!!), “I Got Rhythm,” “Our Love Is Here to Stay,” and a medley of “Rhapsody in Blue” and “The Man I Love” - all very familiar but made fresh again under Carr’s masterful fingers. The biggest surprise is probably the theme from the old “I Love Lucy” television show - sure to bring a smile! I was also surprised to see “MacArthur Park,” an old favorite from a few decades ago. I don’t think I’ve ever heard it as a piano solo before and really like Carr’s arrangement and performance. The operatic piece is Puccini’s “Nessun Dorma,” made popular again in recent years by Paul Potts’ performance on “Britain’s Got Talent.” “I Dreamed a Dream” from Les Miserables is a contemporary classic that opens the album with a very touching and sensitive rendition. Erroll Garner’s “Misty” is soulful, sincere and very beautiful. Movie themes include “Beauty and the Beast,” “Somewhere in Time,” and “Ice Castles (Through the Eyes of Love).” Other familiar piano standards include “Send in the Clowns,” “Memory,” “Stardust,” “Music of the Night,” “The Girl From Ipanema” and a buoyant medley of “New York New York” and “I’ll Take Manhattan.” See what I mean? There is an amazing variety of music here, but the album plays as a seamless whole due to Carr’s expressive playing style and interpretation of these timeless classics.

It appears that this is Thom Carr’s first “official” album, and I hope it is the first of many! Broadway & Beyond is available from CD Baby.
January 7, 2015
This review has been tagged as:
Debut Albums
Thom's Artist Page on MainlyPiano