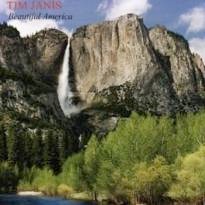 Tim's Website Tim's Artist Page on MainlyPiano
Album Links
Amazon (referral)iTunes
This site contains affiliate links to products. We may receive a commission for purchases made through these links.
Beautiful America
Tim Janis
2004 / TJE
41 minutes
Review by Michael Debbage
Many years ago, Louis Armstrong sung that most memorable song "What A Wonderful World". His voice was distinctive and the lyrics reflected a great tribute to the gorgeous world that we live in. Despite the lack of words, the visual compositions of Tim Janis are equally as effective in reminding us of the beauty of the Creator and His Master Craftsmanship. And at a time when the news headlines are carrying such ugliness, the music of Tim Janis is here to remind us of the beauty around us that we so often take for granted.

Tim Janis is a modern day composer who focuses on his classical roots that have very accessible melodies immersed in romanticism and lush instrumentation. Janis has declared himself to be a big fan of John Williams and John Barry and there is no doubt that there are parallels, especially with the latter. If you loved the soundtracks of the movies such as Dances With Wolves, Out Of Africa and Somewhere In Time by composer John Barry, without reservation, you will fall in love with the music of Tim Janis.

Beautiful America opens with an emphasis on luxuriant strings and the flighty pennywhistle via the emotive composition "The Summer Sea". This, like many of his other compositions, would have been a perfect fit for the Titantic soundtrack as the music is that visual. Equally as dramatic is "Ocean Rose" with its multi-layered violins and the piercing flute work of Cinnamon Creeden. More reflective interludes can be found courtesy of "Light On The Moon" and "Canyon Winds". It is here that we, as listeners have the opportunity to catch our breath and listen to the solo piano work of Pei-Yao Wang. In fact, the stripped down approach gives the album a much-needed pause in solitude and simplicity.

Somewhere in between the overstated and the understated are the more melancholy "Swept Across Forever" and "Mantles Of Gold". It is here that the most obvious John Barry comparisons exist, bringing to mind the saga of Barry's soundtrack Somewhere In Time. However, "Golden Sunrise" boldly integrates the modest and lavish worlds of Janis. Much like its subject, the music begins with a twinkle, surging into its full glory of light and then sets into its completion on the final horizon. However, the most copious moment is the closer "Sight Of My Homeland" that is utterly magical and results in a grand closing statement.

In Psalm 19, David states that "The heavens declare the glory of God; the skies proclaim the work of his hands. Day after day they pour forth speech; night after night they display knowledge. There is no speech or language where their voice is not heard. Their voice goes out into all the earth, their words to the ends of the world". Frankly, Tim Janis, from the artwork to the music and without one word uttered, will quickly remind us of the words of David. Now that is the power of beautiful music.
April 4, 2004
This review has been tagged as:
Michael's Favorites: 2004
Tim's Website Tim's Artist Page on MainlyPiano
Album Links
Amazon (referral)iTunes
This site contains affiliate links to products. We may receive a commission for purchases made through these links.
More reviews of Tim Janis albums 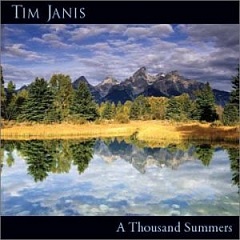