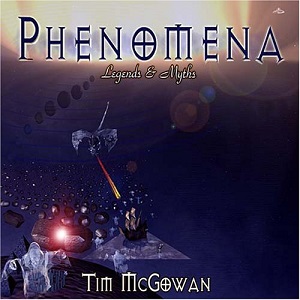 Tim's Website Tim's Artist Page on MainlyPiano
Album Links
Amazon
This site contains affiliate links to products. We may receive a commission for purchases made through these links.
Phenomena - Legends & Myths
Tim McGowan
2007 / McMusic International
56 minutes
Review by Michael Debbage
Back in 2004, McGowan released the enjoyable album entitled Kingdom. Despite good quality music and arrangements the production levels did not match with what McGowan was trying to create. Phenomena - Legends & Myths represents Tim’s tenth instrumental release and not only has he improved on his compositional skills but more importantly he has delivered an album with a huge cinematic sound and production comparable with that of a big label backing.

Born and raised in Scotland, Tim immigrated to the sweltering heat of Florida about nine years ago. Prior to coming Stateside McGowan’s exposure to New Age music was limited. With admissions of being influenced by David Arkenstone, McGowan’s music is big and cinematic with even hints of the more progressive early recordings of Yanni. That said, there is still no doubting the unique style of keyboardist Tim McCowan who is also very confident on the guitar. With his hands also involved with the rock group Burning In December, this may explain the gusto and attitude of his solo work but never at the expense of a good melody and detailed nuances

The album opens with an atmospheric passage of layered synthesizers, reflective piano and textured echoed guitar. Building with a pulsating bass, the introduction is then dominated by rhythmic drums then slows again keeping you on the edge of your seat as to whether to be mellow or manic. McGowan even includes very brief spoken words that only add to the haunting beauty of the opening track of the appropriately titled “Premonition”. It only gives you clues of what to expect.

On the more upbeat side there is the straight forward pace of “Polar Nights” and “Brave New World” that draws some similarities with Ryan Farish. In contrast, there is the more complex cross rhythms found on “Flight Of The Dragon” and it is here that comparisons to the early days of Yanni can be found. Nevertheless, McGowan’s clear progressive undertones throughout the album makes for a very defining sound that is uniquely his own.

Ultimately, the album concentrates on a cinematic approach with mid paced pictorial sounds that color this artist’s musical escapades. This can be found on “Mysterious World” or the even moodier “Oceanic Abyss”. Once again, McGowan does not hesitate to counter his piano work with swirling synthesizers and well placed guitar embellishments. In utter contrast, McGowan is more than capable of keeping his songs simple, as reflected by the flowing ballad “The Gift Of Life” that concludes this stellar album.

If you like your instrumental music shaken not stirred without foregoing its melodic sensibilities, then this vibrant and powerful instrumental disc will stir your emotions. Phenomena - Legends & Myths is a passport to the colorful musical world of Tim McGowan so run do not walk and book a flight today courtesy of McMusic International.
December 11, 2007
This review has been tagged as:
Michael's Favorites: 2007
Tim's Website Tim's Artist Page on MainlyPiano
Album Links
Amazon
This site contains affiliate links to products. We may receive a commission for purchases made through these links.