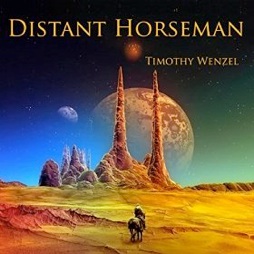 Timothy's Website Timothy's Artist Page on MainlyPiano
Album Links
Amazon (referral)iTunes
This site contains affiliate links to products. We may receive a commission for purchases made through these links.
Distant Horseman
Timothy Wenzel
2016 / Coyote Floe Music LLC
54 minutes
Review by Kathy Parsons
Distant Horseman is the fifth release from Timothy Wenzel. A pianist from a very early age with a wide variety of musical influences, Wenzel employs keyboards and synthesizers to orchestrate his colorful musical stories. Violinist Josie Quick is featured on ten of the twelve tracks, giving the strings a much more natural sound than keyboards alone can provide. The album was mastered by Corin Nelsen, assuring a warm and clear sound. It is interesting to note that Wenzel has a PhD in Physical Organic Chemistry from Cornell University and was a research scientist for many years, working primarily in making polymers using catalysts, before turning his focus back to music.

The cover artwork for Distant Horseman immediately grabbed my attention with its bold colors and stark, otherworldly landscape. A horseman rides toward a two-spired rock formation that has a large planet looming beyond it. The artwork was done by Edson Moraes, who has done some of Wenzel’s previous album covers as well as artwork for his website - very effectively done!

Wenzel says that “the music on this album was conceptualized with metaphors and allegories in mind. For example, the ‘Distant Horseman’ could stand for an alien life-form, or for any of life’s challenges. It’s about the unknown, the unknowable.... This album is about transformation, but also a seasonal journey as a metaphor for an entire life.... But primarily it is a positive journey of surviving and becoming stronger because of hardships, and then breaking through and finding bliss.” That’s a lot to cover in less than an hour, but Timothy Wenzel has created a fascinating journey told with beautiful music along with optional enhancements from poetry and a group of illustrations on his website to further stimulate the imagination.

Distant Horseman begins with “A Bend In the River,” a soothing piece that suggests images of a gently-flowing river in no hurry to go anywhere - a lovely start to our musical journey! The title track is somewhat mysterious and features violin, guitar, and piano in a simple folksong kind of style - a favorite. “Turn and Walk Away” is a haunting reflection on how sometimes relationships end and we are forced to do just that. “No Tomorrow” reminds that eventually time runs out for everyone. Primarily a duet for piano and violin, light percussion and a few other instrumental touches add color and texture. The second half of the album is lighter and less introspective, starting with the cinematic sweep of “Forgiven,” a turning point of sorts. “Ecstasy Eyes” is a gentle love song, pure and simple, expressing sweet wonder and deep emotion. “Summer’s Dance” has a shimmering quality, as things do with new love. “Luminous Wake, Starlit Sea” closes the album with “a lullaby to fall asleep to where you continue your journey in your dreams” - calming, magical and soothing all at the same time.

Distant Horseman is sure to follow Timothy Wenzel’s previous releases to the top of the charts! It is available from Amazon, iTunes, and CD Baby. Recommended!
March 27, 2016
Timothy's Website Timothy's Artist Page on MainlyPiano
Album Links
Amazon (referral)iTunes
This site contains affiliate links to products. We may receive a commission for purchases made through these links.
More reviews of Timothy Wenzel albums 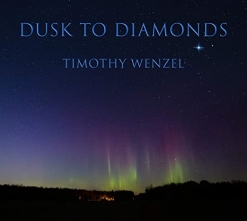 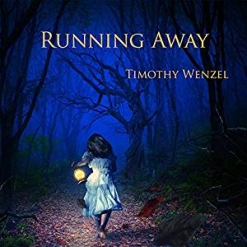 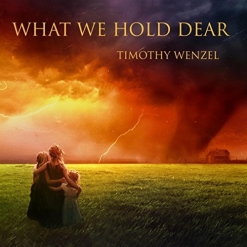