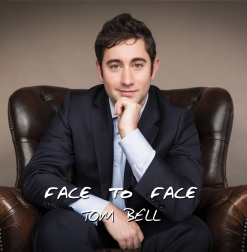 Tom's Website Tom's Artist Page on MainlyPiano
Face To Face
Tom Bell
2016 / Tom Bell
45 minutes
Review by Kathy Parsons
I’ve reviewed more than 1900 albums in the last eighteen or nineteen years, and I have to say that I’ve never heard one quite like Tom Bell’s Face to Face. But then again, how many pianists - especially pianists in their 20’s - are equally adept at classical, blues, and boogie piano? Add to that the amazing fact that young Tom Bell is British, and you’ll join me in uttering a deeply profound, “Whoa!!!” Face to Face is a collection of ten piano solos: three by Chopin, one by Beethoven, four original blues and/or boogie boogie pieces (my favorites!), and one each by Meade Lux Lewis and Pinetop Perkins. Bell says that he plays arrangements of all of the music he plays, but the classical pieces seem to be very close to the originals and are certainly no less demanding technically. The blues and boogie pieces overflow with the pure joy of playing the piano - and of being alive. Bell is currently the only UK pianist to combine classical and blues/boogie-woogie in his concert repertoire. When he contacted me a month or so ago about reviewing his album for MainlyPiano.com, I was unfamiliar with his music, but what a thrill to discover this amazing young artist! This album will certainly be one of my Favorites for the year!

Face to Face begins with Bell’s own “F Boogie,” a zesty gem that begins with a long bluesy intro that gathers energy while demonstrating some impressive playing chops. Once the boogie starts, being impressed changes quickly to jaw-dropping awe! The boy can play! Next up is Chopin’s “Ballade No. 4 in F Minor,” an almost eleven-minute piece that couldn't be more different from the boogie/blues we just heard. Graceful and often full of longing, the more intricate passages are performed with effortless precision as Bell’s heart guides his fingers. With some of the other pianists I know or have heard who play both boogie/blues and classical music, it seems that either the boogie/blues feels too rigid or the classical gets sloppier than it should, but that just isn’t the case with Tom Bell. “Bell’s Boogie” gives us another musical whiplash. Lighthearted and full of fun, it’s a pianistic delight from the first note to the last! Then come two magnificent Chopin Etudes, Op. 10 #1 (nicknamed “Waterfall”) and Op. 25 #12 (“Ocean”), both technically very challenging and passionately-executed. “Friday’s Groove” is another spirited original with a strong dose of pianistic attitude. “Honky Tonk Train Blues” is Bell’s arrangement of a Meade Lux Lewis piece. And then we go to the third movement of Beethoven’s “Moonlight Sonata,” where each note is crystal-clear. “Pinetop’s Boogie Woogie” is likely the best-known piece by Pinetop Perkins, one of the giants of boogie woogie piano, and Bell’s arrangement is exceptional. “Sunday Morning Blues” is the perfect closer for this amazing album. Relaxed and contented with a strong back-beat that really rocks, it leaves me the way it started - with my mouth open, saying “Whoa!”

Again, what an inspiring and amazing discovery Tom Bell is! Face to Face is an album that needs to be heard to be believed. It is currently only available from Tom’s website, but it will be coming to Amazon and iTunes soon. I’ll update the links on my site as soon as that happens. I give Face to Face my highest recommendation!
October 27, 2016
This review has been tagged as:
BluesDebut AlbumsKathy's Favorites: 2016Kathy's Picks
Tom's Website Tom's Artist Page on MainlyPiano