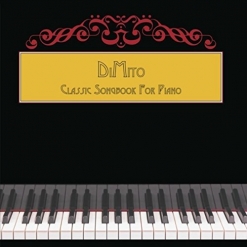 Tony's Website Tony's Artist Page on MainlyPiano
Album Links
Amazon (referral)iTunes
This site contains affiliate links to products. We may receive a commission for purchases made through these links.
Classic Songbook For Piano
Tony DiMito
2015 / E Tones Music
43 minutes
Review by Kathy Parsons
Classic Songbook For Piano is a collection of seventeen original piano solos composed and performed in the styles of some of Tony DiMito’s favorite classical composers. He is quoted in an interview as saying “I noticed there was a lack of certain classical music in the libraries out there. I thought one of these days, I should make a CD of stuff that sounds classical.” And so he did! There is a wide range of classical styles in the music, from baroque to more modern, and the playing times vary from just over a minute to 5 1/2 minutes, which is pretty close to the playing times of many of the shorter pieces in classical piano songbooks. It is very interesting to learn that most of these pieces started out as string quartets. When DiMito wasn’t satisfied with the recordings that resulted, he arranged the quartets as piano solos and performed them himself.

DiMito worked in Hollywood and New York for more than twenty years, composing and editing music for films and television (he has at least seventy-five films and TV shows to his credit). He continues to compose for film and TV, but is also working on a symphony and is writing music with bassist Kasim Sulton. A Pennsylvania native, DiMito started playing music at the age of eight. He graduated from the Berklee School of Music with a degree in Music Production and Engineering before heading west. Photos on his website show him playing several different instruments, including piano, guitars and trombone.

Classic Songbook For Piano begins appropriately with “Prelude,” a lovely piece that hints at Chopin. “Etude in A Minor” has the relentless energy of the Baroque era. “Sans Souci” (“Without Worry”), is a haunting slow waltz with a wonderful minor key melody. The transcription of this short piece is included in the liner notes of the CD. “Concertina” has a more “Mozartian” flair. “Mosaic” has the non-stop flow of the baroque era, but the piece itself sounds more contemporary - maybe even a baroque/new age hybrid! “Jardin” reflects on the French Impressionists. The longest composition on the album by more than two minutes, the piece has a chance to develop and evolve, introducing several themes and then tying them all together - a favorite. “Clockwork” is a great example of the use of counterpoint (two or more melodies played at the same time). “Ode to Be” is another favorite with its wistful melody and easy flow. I also really like “Nocturne,” which is reminiscent of Chopin’s wonderful “night songs.” Dark and passionate, this is my favorite piece on the album. “Lament” is also gorgeous with a deeply emotional power, perhaps with a nod to Beethoven or even Schubert. “Tone Poem” is much more 20th century classical - more free-form and abstract, as is “Finale,” which brings us to the last page of the Songbook.

Classic Songbook For Piano is a very interesting and enjoyable listening experience! It is available from Amazon, iTunes, and CD Baby. Recommended!
April 17, 2017
Tony's Website Tony's Artist Page on MainlyPiano
Album Links
Amazon (referral)iTunes
This site contains affiliate links to products. We may receive a commission for purchases made through these links.