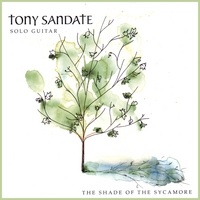 Tony's Website Tony's Artist Page on MainlyPiano
Album Links
Amazon (referral)iTunes
This site contains affiliate links to products. We may receive a commission for purchases made through these links.
The Shade of the Sycamore
Tony Sandate
2007 / Weaving Libra Records
56 minutes
Review by Michael Debbage
Tony Sandate was a service technician that repaired the refrigerator of artist, producer and founder of Weaving Libra Records, Eric McCarl and needless to say, found his recording home with the label. With the very impressive debut Sunset Mediation to follow up with, Sandate marked time and released the festive Christmas Journey and now three years later, The Shade Of The Sycamore, his second album of original compositions. Not quite as instantly appealing, Sandate stretches out with a more complex array of songs that also includes his trademark warmth and likeability.

The opening track, “Danza #1,” places you on immediate notice that this album is not going to be an encore performance of Sunset Meditation. It is immediately followed by the traditional rendition of “Humildes Gracias” that is the only song not self-composed. Along with “Blues Improv” as well “Distractions”, both void of melody, it is very clear that Sandate is attempting to spread his wings musically in the technique department but at the expense of the accessible melodies found on his impressive freshman effort.

This is not to say that his follow-up effort is nullified of any user friendliness. We are treated to the accessible uncomplicated melody of “Linda Cancion” that exudes the affection associated with his debut. Similar results are found on the highly likable “Mary’s Song” with its gorgeous melody. That said, Sandate finds the best of both worlds on “General Dance” where he gets to stretch himself, all within the confines of an attractive flowing song structure.

The sycamore tree can grow to massive proportions leaving those under it with plenty of shade. Much like the tree it represents, The Shade Of The Sycamore comes across lukewarm at times with a greater emphasis on technique than melody leaving you searching for the sunlight that is hidden by its “foliage”. Nevertheless, the album reflects an artist attempting to stretch himself rather than just duplicating himself and from that aspect makes for a very interesting listening experience.
March 20, 2009
This review has been tagged as:
Guitar music
Tony's Website Tony's Artist Page on MainlyPiano
Album Links
Amazon (referral)iTunes
This site contains affiliate links to products. We may receive a commission for purchases made through these links.
More reviews of Tony Sandate albums

The Shade of the Sycamore
2007
Review by Kathy Parsons