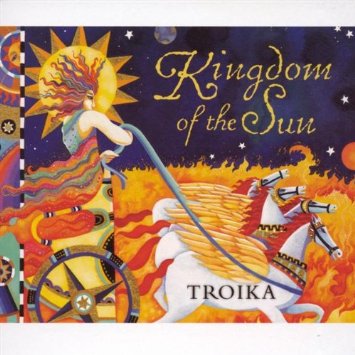 Troika's Artist Page on MainlyPiano
Album Links
Amazon
This site contains affiliate links to products. We may receive a commission for purchases made through these links.
Kingdom of the Sun
Troika
2003 / Narada
Review by Michael Debbage
To state that David Arkenstone is a prolific writer and arranger would be an understatement. What makes this artist unique is that despite his high profile, the material he composes is largely high quality and drama. Troika is no exception to this rule, especially this time out. I would venture to say that it is by far the most outstanding Troika material to date and geared most closely to the early material of David Arkenstone.

It comes as no surprise to some of you that I am a huge David Arkenstone fan. Ever since his 1991 Grammy nominated In The Wake Of The Wind I have missed very little in the material that David Arkenstone is involved in. His last solo effort Sketches From An American Journey made my Top Ten list for 2002 and if I was pressed to pick my favorite release of the year it would probably be the lead candidate. And while that particular effort was certainly a more commercial endeavor, Kingdom of the Sun aims at his early style of electronic soundscaping, building on themes of visionary fantasies and escape.

Troika apparently is three unknown musicians that have the wonderful pleasure of executing and performing Arkenstone's compositions. While Arkenstone has participated in the production and arrangement department in the past, the advance disc does not relay enough information for me to able to confirm such involvement here. Yet judging by the musical comparisons, even if he is not credited as such, his influence is indelibly stamped all over the music.

This is Troika's fifth release and while the last project flirted with Native Indian themes, Kingdom of the Sun has returned to both the early days of Troika and Arkenstone. The majority of these tracks would have been right at home on David Arkenstone's debut album Valley In The Clouds. Just skip to the closing track "God Of The Shadows" that has a mystical transient ambience to it. There is neither an obvious melody nor structure to it. It just seems to wander and loom over your entire being. While discussing mystical themes, check out the suspended "Sister Of The Sun" that will transport you to places of peace and rejuvenation. Or for that matter, "God Of The Sea" which has a slow, reoccurring bell or gong effect complimented by swirling synthesizers and keyboards that are mesmerizing.

However, not all the tracks are so mystical but they are nevertheless moving and inspiring. For instance, there is the inspirational and angelic "Goddess Of Love" that also includes some voice samples that are pure and uplifting. This is probably the stellar standout track for me.

Those of you that enjoy the more melodramatic moments of Arkensounds may prefer the pulsating "The Messenger" or "The Warrior" that includes crashing drums, percussion and over the top sweeping keyboards that makes David's music so majestic. The more subtle but equally dramatic "The Emperor" draws upon delicate Asian themes that makes for a magical moment.

There are a few less significant moments within the project but they still add to the ambience and mood setting of this very provoking project. This is without doubt Troika's finest moment to date. Those that found Arkenstone's last project too mainstream and are looking to relive the electronic waves of expression and grandeur that David Arkenstone became well known for, then look no further as this disc has your name written all over it.
February 12, 2003
This review has been tagged as:
Michael's Favorites: 2003
Troika's Artist Page on MainlyPiano
Album Links
Amazon
This site contains affiliate links to products. We may receive a commission for purchases made through these links.