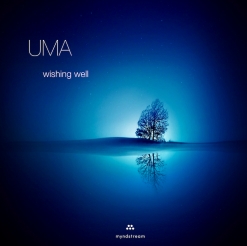 UMA's Website UMA's Artist Page on MainlyPiano
Album Links
myndstreamApple/iTunesSpotifyDeezer
This site contains affiliate links to products. We may receive a commission for purchases made through these links.
Wishing Well
UMA
2021 / myndstream
35 minutes
Review by Kathy Parsons
When I first read that UMA is a trumpet and guitar duo from Estonia, I admit I was less than excited. As soon as I started listening to Wishing Well, though, it was obvious how wrong I was! Silky smooth, free and captivating, Wishing Well is one of those genre-defying albums in a category all its own. UMA was formed in 2007 by guitarist Robert Jürjendal and trumpet/ corno da caccia player Aleksei Saks, two classically-trained musicians who mix purely-produced sound with live electronics for a style somewhere between new age, ambient, electronica and the subtle, cool tones of ECM-style jazz. The name UMA comes from the South Estonian Seto dialect and means "own." Aleksei Saks' trumpet is often muted, softening the sound to a mellow dreaminess. I had never heard of the corno da caccia, but it is a horn based on the hunting horn. It looks similar to a small French horn, but the playing technique is quite different, as is the sound. In addition to acoustic and electric guitars and horns, Wishing Well features Finnish drummer Markku Ounaskari.

Wishing Well is the fifth album from UMA and their first release since Peidus pool (2013). Their other three albums are Civitas Soli (2008), Hymn To Undiscovered Land (2010), and Meeting Unknown (2012). Both artists have released solo albums as well as collaborations with a wide variety of other artists. They have performed in concerts and festivals all over Europe, including a concert for the King and Queen of Sweden hosted by the President of Estonia in Stockholm. Wishing Well is their first release on the American myndstream record label and should prove to be an auspicious introduction to their music in this part of the world!

Wishing Well begins with the title track, a gorgeous piece that overflows with a dreamy feeling of longing. Very light strings add to the smooth texture of the trumpet and guitar, as does light percussion. "Old Diaries" begins with the sound of military-style drumming, but once the guitar and trumpet enter, the sound lightens to an almost playful, conversational feeling - I love this one! "Lightness of the Soul" is one of the jazzier tunes, but is definitely on the "cool" side with its easy rhythm and gentle flow. The smooth but somewhat bittersweet "Longing" feels much like a pleasant daydream set to a slow, easy waltz tempo. Smooth and uncluttered, "My Days" blends simple melody lines on horn and guitar with a freer, jazzier rhythm. "Deep Sea" is my favorite track on the album. Peaceful and very soulful, all three musicians put heart and soul into this one, proving that it doesn't take a multitude of notes to convey deep emotion or tell a story. "Beyond Skyline" seems to yearn to know what's beyond what can be seen with the naked eye. Who or what could possibly be waiting over there? What a great ending to a superlative album!

Wishing Well is available from Apple Music, iTunes, Spotify and Deezer. I love this album and hope to hear much more from UMA in the near-future!
July 12, 2021
UMA's Website UMA's Artist Page on MainlyPiano
Album Links
myndstreamApple/iTunesSpotifyDeezer
This site contains affiliate links to products. We may receive a commission for purchases made through these links.