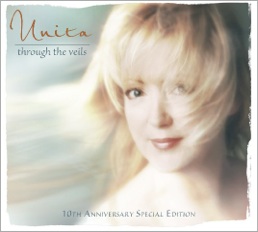 Unita's Website Unita's Artist Page on MainlyPiano
Album Links
Amazon (referral)iTunes
This site contains affiliate links to products. We may receive a commission for purchases made through these links.
Through the Veils - 10th Anniversary Edition
Unita
2009 / Heartsong Music
59 minutes
Review by Kathy Parsons
I have to admit that I missed Unita’s Through the Veils the first time around, so having a second chance with the 10th anniversary edition is a real treat! The album was remastered and two new bonus tracks were added, so even if you have the original, the updated version is a must. Unita’s angelic vocals are accompanied by Joseph Akins’ (her husband) piano and keyboards on most of the tracks, and Herb Ernst (keyboards) and Peter Sterling (Celtic harp) also appear. Often compared to the other singers in the new age genre, Unita’s voice is clear and passionate yet delicate. It isn’t often that a singing voice gives me chills, but the deep emotions expressed are incredible. Most of the instrumentation is spare, seeking only to support and enhance Unita’s vocals. It is with very good reason that Through the Veils is up for several awards all over again!

The title track begins the album and was inspired by a friend’s painting with the same title. Gentle and reassuring, it tells of a place where dreams live forever and we all live together in peace. “Myth” is one of the new pieces, and is mostly an instrumental. Created with the feeling of enchantment and wonder of entering a mythical, mystical world, Unita’s voice was mixed to become another musical instrument. Very visual as well as ethereal, this is a gorgeous piece! “Magic Love” is a tender love song about the kind of true love usually only found in fairy tales. The layered vocals create their own kind of magic and otherworldliness in the instrumental prelude. The second half of this lovely piece adds the passionate lyrics and hypnotic vocals. “In My Garden” is a favorite. Inspired by a dream, this is one of those songs that’s so beautiful it can make you cry. The Celtic harp is a wonderful addition to the piano and keyboards. I also love “Reminds Me of a Dream,” a haunting love song composed for an independent film and that gets to me every time I hear it. There go those chills again! “Wings” is the second bonus track, and again uses Unita’s voice as another instrument in the piece. It’s so calming and peaceful that it’s a song to revisit again and again. Breathtaking! “Father’s Dream” is a powerful tribute to a beloved father, and the words go right to the heart - another favorite! The album closes with “The Dove’s Cry,” a call to peace and love that again sends chills with the emotion and truth of the lyrics. What an amazing album!

Through the Veils is a true classic in the new age genre, and I’m so glad I had a chance to experience it the second time around. It is available from unitasong.com, Amazon, CD Baby, and iTunes. Highly recommended!

March 8, 2011
Unita's Website Unita's Artist Page on MainlyPiano
Album Links
Amazon (referral)iTunes
This site contains affiliate links to products. We may receive a commission for purchases made through these links.