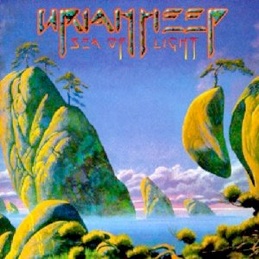 Uriah Heep's Website Uriah Heep's Artist Page on MainlyPiano
Album Links
Amazon
This site contains affiliate links to products. We may receive a commission for purchases made through these links.
Sea of Light
Uriah Heep
1995 / Eagle Records
61 minutes
Review by Michael Debbage
With the exception of the loyal Heepster fans, Uriah Heep had been dismissed a long time ago as far back as the year 1976 for some. But after the word of mouth about their resurgence it appeared that revisiting an old favorite was worth the risk courtesy of their 1995 release Sea Of Light. One listen and you will be hooked as this album began the revival of Heep who found the uncanny ability to blend the old with the new, pleasing both the old Heepsters and the newer fans without dismissing them as a nostalgic trip.

Clearly the albums from Look At Yourself thru Sweet Freedom in the early seventies were their highly productive days. Their success stemmed from the ability to play heavy and loud yet melodic and diverse. By the 1980's they had become a product of FM radio, attempting a poor man's version of Foreigner via their minor hit “That's The Way That It Is.” The later selections on their retrospective 3-CD box set Two Decades In Rock supported this theory. Pleasant but not inspiring but it appeared that Heep had become a heap of something to dispose of, but Sea Of Light prevented such a tragedy and represents Heep back in fine form effectively pleasing both Heep camps combining the best of both worlds and molding it together to present something for everyone.

The disc opens in overdrive with “Against The Odds” and shows Mick Box in fine form on guitar. Frankly his guitar work with the exception of his wah-wah pedal was never the main attraction to Heep. Clearly the years have brought greater depth both to his playing and songwriting ability as he teams up very effectively with keyboard player Phil Lanzon. In fact, Lanzon's keyboards are innovative and fresh on track two “Sweet Sugar” as well as throughout the CD. This track is written by bass player Trevor Bolder and just chugs along in grand Heep style. And it does not stop there as we roll right into “Time Of Revelation” featuring again the songwriting skills of Box and Lanzon who are clearly two peas in a pod with their composition skills.

It is not until we get to track 4 that the group slows things down courtesy of “Mistress Of All Time”. Written by Lanzon, his keyboards are delicate and bounce softly over your ears. Assisted by Box's wonderful acoustic guitar touches, it takes you back to the days of Demons & Wizards. We then return to some wonderful grand piano work by Lanzon while the vocals and harmonies of Bernie Shaw brings the mid-tempo ballad all together. “Universal Wheels” opens with some spacey keyboards and proceeds to put us back into rocking mode. Assisted with some narrative bits and pieces from the media, the lyrics discuss the adverse effects of man on earth. A simple Hammond organ solo from Lanzon is contrasted effectively with some great Box wah-wah effects on the guitar. A siren closes the song jumping right into the aggressive track “Fear Of Falling” penned by Bolder. Is that Bolder on vocals because it does not sound like Shaw?

We are then brought to the absolutely outstanding “Spirit Of Freedom” which is as good as anything Heep has done to date. Box is in top notch form and Shaw's lead vocals along with the band's harmonies are upfront and really catchy. You will be singing this song on its first listen courtesy of the uplifting chorus and lyrics. Unfortunately “Logical Progressions” pales in comparison but not a bad mid-tempo rocker to introduce us to the moody and pensive ballad “Love In Silence”. This again features some hauntingly beautiful ivory work from Lanzon, ornamented by some mighty string arrangements from Peter Becket, making it grand and epic in size. The mood alters and we rock thanks to “Words In The Distance” with some fine frying fret work from Box, although too brief. This tone is continued via “Fires Of Hell” with Box's continued frenzy fret work along with Lee Kerslake's rolling rock steady drum work, borrowing a little from Bonham. Heep gives us room to breathe and closes the disc with the very reflective acoustic ballad “Dream On”. It leaves us wanting more, and its follow-up disc Sonic Origami fulfills that appetite too.

While Uriah Heep are not as prolific as they once were and have only released three studio efforts in over fifteen years, including the impressive 2008 Wake The Sleeper, Heep continue their striking return to form that began with the outstanding Sea Of Light. Clearly the tides have turned making Sea Of Light not just a flash in the pan but a pivotal album that has once again made Uriah Heep relevant, credible and even inspiring. With their latest release Into The Wild about to hit the stores, early reports are that the healthy trend that began with Sea Of Light continues to make this album not only an ageless favorite but a cornerstone addition to one of many epic albums that Heep have managed to create.
May 5, 2011
This review has been tagged as:
Ageless Favorites
Uriah Heep's Website Uriah Heep's Artist Page on MainlyPiano
Album Links
Amazon
This site contains affiliate links to products. We may receive a commission for purchases made through these links.