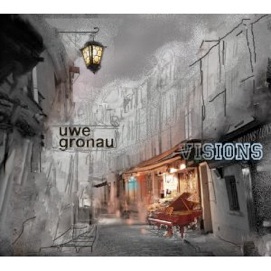 Uwe's Website Uwe's Artist Page on MainlyPiano
Album Links
Amazon (referral)iTunes
This site contains affiliate links to products. We may receive a commission for purchases made through these links.
Visions
Uwe Gronau
2012 / Time Rider Music Publishing
71 minutes
Review by Kathy Parsons
Visions is a very eclectic collection of twenty original compositions by German musician/composer Uwe Gronau. Each of the pieces “represents a vision that came to me in the night, like a scene from a movie with specific imagery. I composed the music at night....I could see pictures and I formed these pictures into music. My music studio is very close to where I sleep so I was able to immediately transpose these nighttime ideas into music.” The common theme that brings all of these dreamlike snapshots together is a summertime late-night journey through Paris, a city Gronau knows well and visits often. To his credit, Gronau astutely avoids the stereotypical sounds that we usually associate with Paris - accordion, violin, and overly sentimental love songs - making these Visions very personal and also very fresh. Some of the pieces are on the ambient side, but many have a strong beat and contain influences as varied as jazz, prog-rock, pop, techno, trance, and space music. There are also traffic sounds, children laughing, and various other atmospheric sounds that add a different twist to the music. Sometimes high energy and sometimes serenely beautiful, this is a fascinating portrait - or series of portraits - of a city that for centuries, artists of many different genres and art-forms have tried to capture and describe from their individual points of view. Like the Woody Allen film Midnight in Paris, Visions shows us a Paris that most of us would never experience even if we walked the streets late at night - a magical world of shadows, mystery, and intense vibrance. Gronau is primarily a pianist, synthesist, and organist, which gives him a wide range of instrumentation and sounds to work with. A couple of tracks include guest artists on soprano sax and guitar, but most of the music comes from the exceptionally capable hands of Mr. Gronau. So, if you’d like to take a late-night stroll through the streets and parks of Paris without needing a passport, slip this music into your player and let your imagination take you to places only you can imagine. It’s a short, safe, and very inexpensive tour that will get your own creative juices flowing.

Visions is available from Amazon, iTunes, and CD Baby. Check it out!!!
January 14, 2013
Uwe's Website Uwe's Artist Page on MainlyPiano
Album Links
Amazon (referral)iTunes
This site contains affiliate links to products. We may receive a commission for purchases made through these links.
More reviews of Uwe Gronau albums 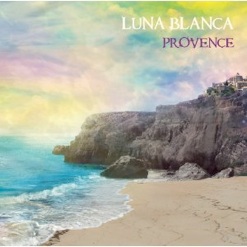