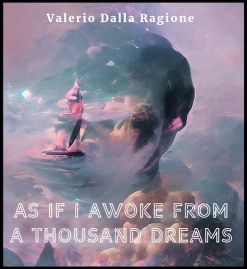 Valerio's Artist Page on MainlyPiano
Album Links
Amazon (referral)Apple/iTunesSpotifyYouTube
This site contains affiliate links to products. We may receive a commission for purchases made through these links.
As If I Awoke From A Thousand Dreams
Valerio Dalla Ragione
2022 / 3970350 Records DK
80 minutes
Review by Kathy Parsons
As If I Awoke From a Thousand Dreams is the eighth full-length album from Italian pianist/composer Valerio Dalla Ragione. A self-taught composer, the twenty-five solo piano tracks are varied and were composed between December 2021 and May 2022. Most of the music is edgy and experimental and Valerio says that "the album has marked an important stylistic passage as I'm moving into modal harmony, at times modal in a medieval sense (in more recent works) at times in a jazzy one. I've put into this work almost all of my inspiration sources - there's playful counterpoint, minimalistic patterns, varying harmonic and arrangement styles (from blues to romantic to folk), rhythmic games, comedic quotations and often erratic/unusual structural thinking. Many pieces' titles consist of puns regarding the pieces' structure, development or inspiration, and offer glimpses into the works' analysis and comprehension." Due to the album's runtime of 81 minutes, Valerio suggests that those with a limited amount of listening time divide the album into three or four smaller segments, "but it goes without saying that the album is a single experience as a whole, if one has the time to get through it all."

Born in 1995, Valerio Dalla Ragione took piano classes from the age of 7 until he was 19 and then followed a different career path. In addition to his eight piano albums, he has composed two orchestral symphonies, a few chamber sonatas, soundtracks, and several piano EPs. The tracks on As If I Awoke From a Thousand Dreams range in length from 40 seconds to 8 1/2 minutes, offering an interesting assortment of styles and approaches - from minimal and quiet to powerful and even a bit boisterous. If you are looking for music that is for sleep or relaxation, this album probably won't be a good fit, but if you enjoy music of a more experimental nature, be sure to check this one out!

I obviously don't have space to describe every track on As If I Awoke From a Thousand Dreams, but I can tell you about a few of them to give you some ideas about the music. The album begins with "As If I Awoke" and ends with "From a Thousand Dreams," obviously splitting the title into two parts, both of which are powerful musical expressions that seem to tell a colorful story without words. "Invention in C What I Did Here" combines a bit of Bach with a very modern and energetic contemporary "invention." The title for "Sun Without Worlds" is a play on "Song Without Words," and is quieter and more melodic than most of the tracks. It won't be mistaken for a Mendelssohn piece, but has an elegant, expressive flow. "Serial Breakfast" is a one-minute piece that is "a simple harmonization of a melody which solely consists of a twelve-tone scale played up and down, as in serial (dodecaphonic) music." "Phrygian Weather" is very slow and open at the beginning, becoming more complex and energetic as it evolves, combining classical elements with jazz. "Warm Up, We're Going to Hell" began as a warm-up exercise, and Valerio decided to keep and expand on it - dizzying! My favorite track is "And the Doors Opened, and We Stepped Outside Into the Light." The rapid broken chord patterns on left hand support a relatively simple but powerful right hand that isn't quite melodic but is very expressive. "Uncanny Relics from Outer Space" weaves together a variety of musical phrases and gives them a mysterious cast. "Mentally I Live Here" ranges from big and bold to more peaceful and pensive, suggesting a broad range of moods and reactions - fascinating!

As If I Awoke From a Thousand Dreams is a unique listening experience and is available from Amazon, Apple Music/iTunes, and streaming sites such as Spotify and YouTube.
October 22, 2022
This review has been tagged as:
Latest Reviews
Valerio's Artist Page on MainlyPiano
Album Links
Amazon (referral)Apple/iTunesSpotifyYouTube
This site contains affiliate links to products. We may receive a commission for purchases made through these links.