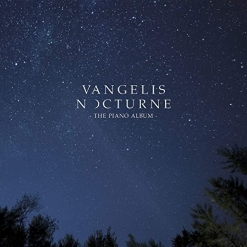 Vangelis' Website Vangelis' Artist Page on MainlyPiano
Album Links
Amazon (referral)iTunes
This site contains affiliate links to products. We may receive a commission for purchases made through these links.
Nocturne: The Piano Album
Vangelis
2018 / Decca Records
76 minutes
Review by Kathy Parsons
Having heard Vangelis’ music recorded only on electronic instruments, I was really looking forward to his Nocturne: The Piano Album, thinking that at least some of the music would be solo piano. Promo materials stated that Vangelis recorded his music on a grand piano for the first time for this album, so I was excited to hear it. Well, there are seventeen tracks and none of them are solo piano. All have lots of reverb, digital strings and other instrumentation, and many of the “piano” sounds are also digital. There is nothing wrong with the music, but why subtitle the album as “The Piano Album” if it isn’t? Some of the promo materials also call it “solo piano” and it is not. Eleven of the seventeen tracks are new and the other six are new arrangements of older favorites, including the one that introduced Vangelis to a world-wide audience, the “titles” theme from Chariots of Fire. The love theme from Blade Runner, the theme from 1492: Conquest of Paradise, “Movement 9, Mythodea” “La petite fille de la mer” from “L’Apocalypse des animaux” and “To the Unknown Man” from Spiral (1978) are the other older titles.

One of my favorite pieces on the album is “Movement 9, Mythodea,” which (ironically) features guest pianist Irina Valentinova. This time it’s definitely an acoustic piano, accompanied by a variety of synth symphonic orchestration. “Through the Night Mist” is very beautiful and dreamy with lots of romantic strings. “Intermezzo” is very symphonic, but I don’t hear a piano anywhere in this one. It’s fun to hear a new version of “Chariots of Fire,” a piece I used to teach my piano students on a regular basis. This version is mostly strings and “piano” without the powerful rhythm of the original. The second half of the piece has several variations that include a change to a minor key - some interesting new twists! I also really like “Lonesome,” which has a very classical feel and expresses deep, heartfelt emotions. The strings get a little overbearing in places, but it’s a really nice piece. “Pour Melia” (the album is dedicated to her without mentioning who she is) closes the album with a short and sweet lullaby played on what sounds like a toy piano (plus lots of reverb and strings).

Again, I have no real complaint about the music on Nocturne: The Piano Album - it’s just not really a piano album! That’s my complaint.
April 21, 2020
Vangelis' Website Vangelis' Artist Page on MainlyPiano
Album Links
Amazon (referral)iTunes
This site contains affiliate links to products. We may receive a commission for purchases made through these links.