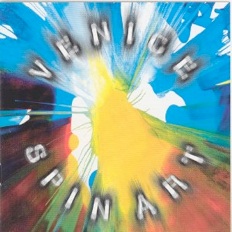 Venice's Website Venice's Artist Page on MainlyPiano
Album Links
Amazon (referral)iTunes
This site contains affiliate links to products. We may receive a commission for purchases made through these links.
Spin Art
Venice
1999 / Vanguard Records
54 minutes
Review by Michael Debbage
The Eagle has landed but not in the shape and form that you have come to expect. We are not talking about Don Henley/Glenn Frey and company putting aside their petty differences...we are actually referring to the Southern Californian band Venice. And the similarities do not stop at their origin as the music itself oozes of the West Coast sound that the Eagles became famous for.

To those of you not familiar with Venice, they have been around for over 28 years. They initially released a 4 song demo appropriately titled Do It Yourself back in 1986 which failed to make a splash with the music industry. It was not until 1990 that they secured a break and released their self titled debut on Modern Records by way of distributor Atlantic Records. Big gun producer Danny Kortchmar, famous for his work with James Taylor was brought in, but clearly the record company had other ideas for Venice. This album presented a soft rock sound geared more at the AOR genre and like the demo it failed to significantly propel Venice outside of the local area.

Anchored by the Lennon brothers they returned to the drawing board, and by 1997 they released the very mellow and melancholy Born and Raised courtesy of the smaller Vanguard label. Richly embellished with wonderful laid back harmonies and ballads the songs were more in the vein of the Eagles "Best Of My Love," "Desperado" and "Tequila Sunrise."

Thus, the more upbeat Spin Art was a bit of a surprise after the more compliant Born and Raised yet, it represents the best of both worlds from their freshman and sophomore releases. There is the upbeat folksy "The Man You Think I Am" and "Mary On My Mind" or perhaps the more R&B flavored "End Of The World" and "One Quiet Day." On the other end of the spectrum we have moody ballads courtesy of "Always," "So Bad" and "The Family Tree." The remainder of the songs such as "Garden Wall" and "More Of A Miracle" fall somewhere in the middle of the two styles. But no matter what venture Venice take, it falls into that laid back California style urging you to kick back and relax in the sun and listen to the palm trees rustle as you watch a few clouds dance in the blue skies.

Venice has just released their brand new double album What Summer Brings. Decade after decade they have the ability to hook the listener with a great melody that is fleshed out by some wondrously memorable acoustic chords and full harmonic vocal arrangements that require your immediate attention. If you have not yet visited Venice then Spin Art is a great place to start especially if you are tired of waiting for "hell to freeze over". So give this piece of art a spin as Venice has not only chosen to be influenced by the Eagles, they have decided to go one step further and continue to keep the West Coast sound on the musical map.
June 22, 2014
This review has been tagged as:
Ageless Favorites
Venice's Website Venice's Artist Page on MainlyPiano
Album Links
Amazon (referral)iTunes
This site contains affiliate links to products. We may receive a commission for purchases made through these links.