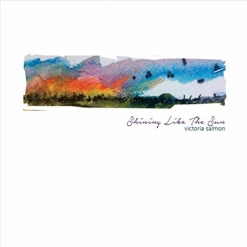 Victoria's Website Victoria's Artist Page on MainlyPiano
Album Links
Amazon (referral)
This site contains affiliate links to products. We may receive a commission for purchases made through these links.
Shining Like the Sun
Victoria Salmon
2017 / Victory Garden Music
43 minutes
Review by Kathy Parsons
Shining Like the Sun is the third solo piano release from Alaskan pianist/composer Victoria Salmon. Improvisation has been part of Salmon’s composing and recording process on previous albums, but the music on this album is improvised from beginning to end. The album was recorded at Will Ackerman’s Imaginary Road Studios by Tom Eaton with production assistance from Ackerman. The music was then mixed and mastered at Philosophers Barn Mastering in the UK. In addition to her piano music, Salmon is a singer/songwriter who participates in the visual and performing arts in her home state as well as the Pacific Northwest. She spends part of the winter months in the inner Arctic Circle where she teaches children living on the banks of the unspoiled Draanjik (Black) River, the same remote setting as the television series, “The Last Alaskans.” The area is “surrounded by stillness, quiet, dancing auroras, a vastness of pristine white and a long, dark night. Suddenly the sun breaks through in an explosion of passion, light, color and I stand in awe.....forever inspired and transformed in the beauty of holiness.” (quoted from Salmon’s website)

The thirteen tracks on Shining Like the Sun are very free and evoke visions of peaceful open space while expressing a variety of mostly calming emotions. The album begins with “In The Evening,” a very peaceful improvisation that sets the relaxing tone of the album. “Treasures” has a distinctive sparkle and shimmer to it, yet conveys a sense of mystery. Treasures are not necessarily “things” - they could be light dancing on the water or stars sparkling in a clear, black sky. Whatever they are, treasures always have meaningful value and can often inspire awe - that’s what I hear in this piece. “Soon Breaks the Dawn” begins very quietly with a few notes here and there, gradually adding more movement and activity as the piece evolves. The title track is by far the longest piece on the album at almost seven minutes and is beautifully expressive as it explores a variety of related themes. “You Alone” feels intimate and tender, conveying deep emotions in the way that only music can. “Rest” soothes and envelops the listener in a warm and peaceful atmosphere. “Everlasting” brings the album to a gentle yet vibrantly spiritual close with expressions of tranquility, joy and gratitude (my interpretation).

It has been more than six years between solo piano releases from Victoria Salmon, but it was worth the wait! Shining Like the Sun will be released on January 1, 2018 and is available for pre-release sales on Amazon. The album will be available from Amazon, iTunes and CD Baby. Check it out!
December 27, 2017
Victoria's Website Victoria's Artist Page on MainlyPiano
Album Links
Amazon (referral)
This site contains affiliate links to products. We may receive a commission for purchases made through these links.
More reviews of Victoria Salmon albums 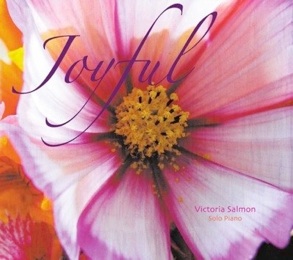 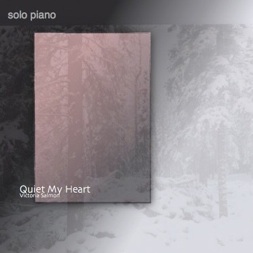