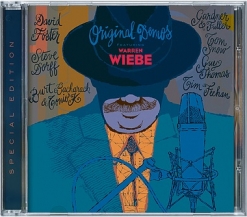 Warren's Artist Page on MainlyPiano
Album Links
Contante & Sonate
This site contains affiliate links to products. We may receive a commission for purchases made through these links.
Original Demos
Warren Wiebe
2018 / Contante & Sonante
59 minutes
Review by Michael Debbage
It has been two full decades since the late great Warren Wiebe passed away. But thanks to the label Contante & Sonante, Warren Wiebe’s exquisite vocals have seen a smattering of featured tracks over the meticulously handcrafted twelve releases that the label has created since 2004. While coming close with the Tom Snow Original Demos release, for the first time the newest in the Original Demos series is a full on focus of the pure vocals of Warren Wiebe. Bringing several previously released tracks but more importantly eight previously unreleased tracks this is a beautiful addition to the Original Demos series but a fitting tribute to Warren Wiebe.

For those of you not familiar with the golden voice of Warren Wiebe, he was prominently featured on David Foster’s 1990 solo album River Of Love as well as the “Voices That Care” celebratory song, somewhat in the vernacular of “We Are The World”. Needless to say what an opportunity to have David Foster contribute two demos from his way overlooked 1994 solo album Love Lights The World that only saw a Japanese release. Here on Original Demos we are invited to hear Wiebe’s performance of “The Color Of My Love” which in its final form would feature Celine Dion. The second track is “Live Each Day (Ben’s Song)” which on the original album was a beautiful David Foster instrumental song. But to have it here to feature Warren Wiebe’s striking vocals is a complete treat. With no disrespect to Mr. Foster, the vocal rendition is as good as if not better than the instrumental version.

Also of significant interest are two tracks from Guy Thomas who has previously collaborated with Kenny Loggins. In fact Thomas co-wrote the hits “Conviction Of The Heart” and “Leap Of Faith”. Thomas contributes “The Day I First Saw You” which features the songwriting collaborative efforts of current Toto vocalist Joseph William but the vocals are all Warren. Meanwhile, Canadian singer Tim Feehan presents two offers of which one is "Don't Tell My Heart" recorded at Dave Boruff's home studio with the song also featuring Boruff on saxophone. David Foster fans will be very familiar with Boruff best known for his famous sax solo on the hit "Love Theme From St Elmo's Fire". Last but not least there is Warren's very delicate angelic vocal rendition of the Burt Bacharach, Dave Loggins, Tonio K composition "Love Made Me Wait".

Otherwise, the balance of the Original Demos featuring Warren Wiebe features previously released material but now all found in one place to pay tribute to perhaps one of the most overlooked vocalists ever. Needless to say the label Contante & Sonante has another classic stellar release. However Celine Dion sums it up perfectly describing the wonderful Warren Wiebe. After hearing his rendition of “The Color Of My Love” she stated “I can’t sing that song after that man; he has the most incredible voice I have ever heard”. Enough said.
October 14, 2018
This review has been tagged as:
Michael's Favorites: 2018Michael's Picks
Warren's Artist Page on MainlyPiano
Album Links
Contante & Sonate
This site contains affiliate links to products. We may receive a commission for purchases made through these links.