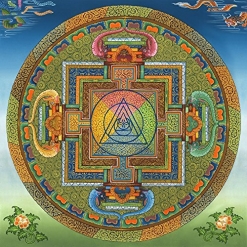 White Sun's Website White Sun's Artist Page on MainlyPiano
Album Links
Amazon (referral)iTunes
This site contains affiliate links to products. We may receive a commission for purchases made through these links.
White Sun II
White Sun
2016 / Be Why
52 minutes
Review by Kathy Parsons
White Sun II is the second release from the Los Angeles-based group White Sun. The core group consists of vocalist and composer Gurujas (pronounced goo-roo-jass); composer, producer and multi-instrumentalist Adam Berry, a two-time Emmy winner; and Harijiwan (hudd-ee-jee-vin) who plays gong and serves as spiritual leader. Guest artists include Mamadou Dibate on kora (a 21-string harp made from a calabash gourd), Abhiman Kaushal on tabla and Gabe Witcher on fiddle, plus additional singers. Most of the songs on the album are based on 5000-year-old yogic mantras, but what makes this music really different is that the songs are set in a more modern song style that will appeal to a much broader world-wide audience. This is obviously working remarkably well since the album made its debut at #2 on the Billboard New Age chart and is currently #1. Even more remarkable is that White Sun II is now part of the required curriculum for two courses at the University of Southern California as part of their health and wellness campaign to find new ways to deal with the stress level of students.

Gurujas started singing and playing the piano when she was very young and began performing at the age of 11 with the Cleveland Orchestra’s Children’s Chorus. She has spent the last decade traveling the world teaching mantras and Naad yoga. She released several singles under her name before forming White Sun. Harijiwan has been teaching Kundalini Yoga since 1975 and has been playing the gong for many decades. Multiple-award-winning composer and songwriter Adam Berry has scored more than 500 episodes for television and fifteen feature films.

White Sun II begins with “Gobinday Mukunday,” an intense and dramatic song with passionate vocals and a fascinating combination of eastern and western instrumentation - a very impressive start! “Ajai Alai” is much more soothing and even a bit mysterious. Gurujas’ incredible voice is so emotionally expressive that no translation of the words is needed. “Simro Gobind” has a very interesting folk-song feeling to it that might inspire you to sing along. One of my favorites is “Aap Sahaee Hoa Har Har Har,” a poignant, dramatic and mysterious song that highlights the beauty and clarity of Gurujas’ voice - gorgeous! The only non-vocal track is a lovely instrumental called “Akal Instrumental” that serves as something of a prelude to the vocal version, “Akal,” which is more ethereal. “Hummee Hum” is quite different. Gurujas says that she wanted to root this yoga song in American music history and to tap into the blues sound of the Mississippi Delta. Several gospel singers were brought in, including The Waters Family, so this is quite a cultural mix that works really well! “Ik Ardas Wahe Guru” brings this amazing album to a quiet, peaceful close.

I have a feeling that we’re going to be hearing a lot more about White Sun and White Sun II, and hope that their music will be even more widely received as the healing, unifying force that it is intended to be. The album is available from Amazon and iTunes. Highly recommended!

September 21, 2016
This review has been tagged as:
Grammy NomineesGrammy WinnersKathy's Picks
White Sun's Website White Sun's Artist Page on MainlyPiano
Album Links
Amazon (referral)iTunes
This site contains affiliate links to products. We may receive a commission for purchases made through these links.