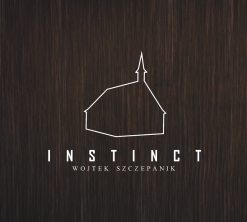 Wojtek's Website Wojtek's Artist Page on MainlyPiano
Album Links
iTunesBandcampSpotify
This site contains affiliate links to products. We may receive a commission for purchases made through these links.
Instinct
Wojtek Szczepanik
2017 / 1631 Recordings
30 minutes
Review by Kathy Parsons
Instinct is the second album from Polish composer/pianist Wojtek Szczepanik, and what a beautiful and emotional listening experience it is! The solo piano album was recorded in an historic chapel built in the 18th century and located in Placzewo (a village in northern Poland). The chapel is constructed entirely of wood and changes the timbre of the piano to warmer, deeper and richer tones. Szczepanik says “I’d say there are two instruments in the album - one is surely the piano and the other one is the chapel itself. Together they form a deep connection between music, nature and faith.” It is also interesting to note that the piano was tuned to the A-432 Hz standard “which is very beneficial to the human body since it resonates perfectly with the human organs” (quotes from Wojtek Szczepanik). The piano was made in Sweden and was designed to sound its best at this tuning rather than the internationally-accepted standard of A-440.

The eight tracks on the album are numbered rather than having more specific titles, allowing the listener to interpret the music in any way he or she chooses. The music is an attempt to catch the beauty of nature - its calmness as well as its power - and ranges from soothing and dreamy to dark and intense. Szczepanik is a very expressive pianist with an accomplished playing style and an original approach to his music. He obviously has much to say with his compositions and I sincerely hope the world will listen!

Instinct begins with an introductory prelude that evokes a peaceful, flowing mood. “I” is a bit livelier, but is still light and relaxed. “II” is a favorite with its melancholy, introspective feeling. “III” is more intense and dramatic and is also a favorite. It begins quietly, but gradually builds to a powerful climax and then calms to a delicate coda. I really love the passion, intensity and freedom of “IV”! “V” is very dark and turbulent, but also very beautiful. The piece calms in the middle and then rebuilds its momentum and power to the end. “VI” begins with a very quiet intro that intensifies its drama and emotional power as it evolves and then returns to the opening theme near the end. “Outro” is something like a rainbow after a big storm, warming and reassuring that all is well.

I’m very impressed with Wojtek Szczepanik and the music on Instinct and look forward to more music from this young artist in the future. This video will give you more information about the music and a chance to see Wojtek playing in the chapel:
https://www.youtube.com/watch?v=9tG5wfYJVjE
The album is available from iTunes, Bandcamp and Spotify. Very highly recommended!
May 26, 2017
This review has been tagged as:
Kathy's Picks
Wojtek's Website Wojtek's Artist Page on MainlyPiano
Album Links
iTunesBandcampSpotify
This site contains affiliate links to products. We may receive a commission for purchases made through these links.