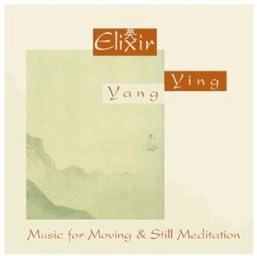 Yang's Website Yang's Artist Page on MainlyPiano
Album Links
Amazon (referral)
This site contains affiliate links to products. We may receive a commission for purchases made through these links.
Elixir
Yang Ying
2013 / Wensar Records
48 minutes
Review by Kathy Parsons
Elixir: Music for Moving and Still Meditation is the first American release by master Chinese composer/musician Yang Ying, a woman whose life story is as amazing as her music. The album itself was born out of a request for music to be used in a University of Illinois research intervention on the benefits of tai chi and qigong for older adults. A longtime practitioner of qigong, Yang Ying did not intend to make a commercial CD, but so many of the intervention participants asked for the music that she decided to release it. Most of the music on Elixir is improvised based on traditional Chinese music and performed on traditional instruments such as erhu, a two-stringed bowed instrument sometimes referred to as the Chinese violin; there are also flutes, nature sounds, zither, and Chinese percussion.

To backtrack a bit, Ying grew up during the Cultural Revolution when her family was persecuted for their political alliances. To avoid being sent to the countryside for political “re-education,” Ying’s father convinced her to give up her dream of becoming a medical doctor and sent her to music college in Zhengzhou. (It is an interesting aside that the Chinese characters for music and medicine are very similar and that the characters for music and happiness are the same!) A distinguished soloist in college, Ying was accepted by the Central Song and Dance Ensemble in Beijing, the premier cultural troupe in China. She was the featured solo instrumentalist from 1978-1996 and routinely traveled throughout Asia performing for heads of state, including three US presidents. In the late 1980’s, Ying founded Cobra, the first all-female rock band in China at a time when rock music was still largely unknown and “discouraged” by those in power. In 1996, she was included in the Chinese government’s publication of Famous Persons of China. The same year, she moved to the US to create music that combines the precision of classical music, the creativity of jazz, and the passion of rock with the soul of traditional Chinese music.

The seven tracks begin with “Lunhui,” which means “circle.” Gongs, chimes, zither, flute, and erhu create a lovely accompaniment to moving meditation. “Wandering” is completely improvised with two erhus, zither, and wood blocks - distinctively Chinese and very relaxed. The next three tracks are musical expressions of sensations and experiences encountered in meditation: “Heaven, Human, Earth,” “Purification,” and “Circulation.” These three pieces combine nature sounds such as birds and flowing water with music that is serene, magical, and very uplifting. Western musical styles intermix with traditional Chinese styles to create a very beautiful and universal musical experience. “Morning Immersion” conveys the feeling of breathing in the pure air of a forest in the early morning - so peaceful! “Aspiring Emptiness” combines two types of electronic zithers and improvised ehru melodies to bring this incredible collection to a tranquil close.

Designed for use with tai chi and qigong, the music on Elixir also offers soothing music for relaxation, mood music, or gentle easy listening. I’m looking forward to learning more about this amazing artist! Elixir is available from yangying-music.com, Amazon and CD Baby. Give it a try for a very different listening experience!

August 28, 2013
Yang's Website Yang's Artist Page on MainlyPiano
Album Links
Amazon (referral)
This site contains affiliate links to products. We may receive a commission for purchases made through these links.