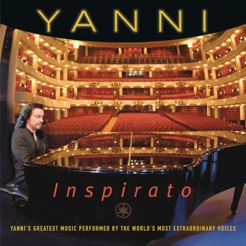 Yanni's Website Yanni's Artist Page on MainlyPiano
Album Links
Amazon (referral)iTunes
This site contains affiliate links to products. We may receive a commission for purchases made through these links.
Inspirato
Yanni
2014 / Yanni Works
51 minutes
Review by Kathy Parsons
Inspirato is an impressive collection of thirteen pieces composed and orchestrated by Yanni and sung by some of the biggest names in opera. I have to say upfront that I am not a fan of operatic singing, but I really enjoyed Yanni’s earlier Voce and Voices, so I thought I’d give it a try. Yanni didn’t write any of the lyrics (most of which are not in English) and the songs have been retitled, but these are some of Yanni’s best-known pieces and should be easily recognizable to long-time fans. All of the music is orchestrated and most songs include piano, strings and other instrumentation, providing a lush accompaniment to some of the most powerful singing voices from around the world. Yanni has always been an artist who dreams big and has a way of making those dreams come true, so it must be quite a triumph to make this complex project come to fruition so beautifully. With classical music becoming a dying art, I salute Yanni for bringing what are often totally opposing forces in music (contemporary and classical) together and clearly demonstrating that music is music no matter what the genre. I can only imagine the thrill of having artists like Placido Domingo and Renee Fleming singing your songs!

This is not one of my favorite Yanni albums, but it is still very beautiful and well worth a listen. Inspirato is available from Amazon, iTunes, and just about any other music outlet.
July 23, 2014
Yanni's Website Yanni's Artist Page on MainlyPiano
Album Links
Amazon (referral)iTunes
This site contains affiliate links to products. We may receive a commission for purchases made through these links.
More reviews of Yanni albums