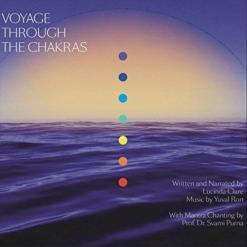 Yuval's Website Yuval's Artist Page on MainlyPiano Lucinda's Artist Page on MainlyPiano
Album Links
Amazon (referral)iTunes
This site contains affiliate links to products. We may receive a commission for purchases made through these links.
Voyage Through the Chakras
Yuval Ron and Lucinda Clare
2018 / Metta Mindfulness Music
146 minutes
Review by Kathy Parsons
Voyage Through the Chakras is a two-disc set with music composed by Yuval Ron, guided meditations written and narrated by British actress Lucinda Clare, and mantras whispered by Svami Purna. Referred to as “musical medicine for the soul,” the album features an impressive list of guest musicians from around the world. Disc 1 contains all of the music supporting Lucinda Clare’s poetic guided meditations, which are vivid, lyrical and uplifting as she guides the listener through the seven chakras on a transformative journey. Her voice is rich and clear, so her narrative is easy to follow. There are “embedded subliminal affirmations” by Dr. Richard Gold, who is also the executive producer of the album. The liner notes state: “this album will entrain your brain to its natural state of inner peace…. For best results, listen daily for 40 days, and then repeat as often as desired.”

Each of the seven tracks on each album ranges from 10-11 minutes, and the instrumentation is reflective of many cultures from all over the world. Dr. Richard Gold explains the purpose of the album: “An important part of the mission of Metta Mindfulness Music is to utilize beautiful original music to honor and integrate ancient spiritual traditions into contemporary culture and practice. On the advice and teachings of masters of sound healing in India, the creative team of Metta Mindfulness Music carefully chose the instruments and quality of each original composition to positively influence the vibration of each individual Chakra. World re-known acoustic musicians were invited to participate and lend their musical skills and intuition to the production. Each Chakra features an original composition created by award winning composer, Yuval Ron. Our goal is to provide a cross cultural experience that appeals to a variety of listening tastes while still remaining true to the intent and wisdom of the ancient traditions.”

Most of the music is what would be categorized as “ambient,” although a few of the tracks are more melodic - especially “Solar Chakra,” which features Dennis Karmazyn on cello - by far my favorite track. “Root Chakra” features Kennth Goff on gongs, “Sacral Chakra" features Pandit Nayan Ghosh on sitar and Yuval Ron on oud, “Heart Chakra” features Shye Ben Tzur on Bansuri flute and vocals, “Throat Chakra” has Andrew Carney on flugelhorn and Chugge Khan on jaws harp, “Third Eye Chakra” has James Hood on PanArt hang (Hood co-composed this piece with Yuval Ron), and “Crown Chakra” features Brien Engle on glass harmonica.

The production quality of the album is superb in every way and I appreciate the artistry that went into the making of this music and the guided meditations. Personally, it’s not an album I would choose to listen to for 40 days, but that’s me. I know that many people find guided meditations very useful, and I’m sure that this is among the very best of those kinds of albums. The world needs a great deal of healing, calm and love, and I’m all for anything that moves in that direction. Voyage Through the Chakras is available from MettaMindfulnessMusic.com, Amazon, iTunes and CD Baby. 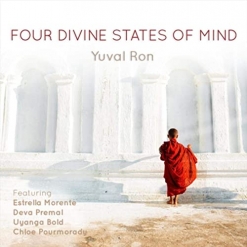