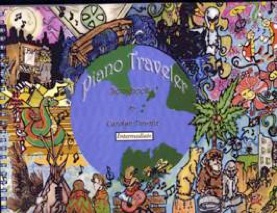 Carolyn's Website Carolyn's Artist Page on MainlyPiano
Songbook Links
Amazon (referral)
This site contains affiliate links to products. We may receive a commission for purchases made through these links.
Piano Traveler, Songbook 1
Carolyn Downie
2007 / Carolyn Downie
Review by Kathy Parsons
Piano Traveler, Songbook 1 is the first volume of an ambitious new series of supplemental teaching songbooks for piano and/or vocal students of all ages at an intermediate level. A teacher herself, Ms Downie composed the music and lyrics with her own students in mind, and has assembled an impressive collection of pieces that reflect differing cultures from around the world and a variety of approaches to the art of music-making. Several of the pieces are composed in American popular music styles with an explanation of where these styles came from and when they were the most popular. Downie also wrote the text for the book, which gives an historical perspective to each style, as well as a full set of lyrics for each song. Some of the pieces have won awards, and all eight are fun to play. In the preface, Downie extols the virtues and vital importance of music education, and concludes: "This book aims to bring people together in a musical celebration of cultural diversity and unity for present and future generations.”

Downie’s “What, Where, When, Who, and How” approach in the text gives students a quick rundown of the important characteristics of each style, where the styles originated, when they were most popular, who originated the music, who some of the artists are who have performed and are still performing the music, and how it is played. She also explains some of the instruments commonly used to express the music. The styles included in Book 1 are Jig, Calypso, Country, Pow-wow, Taqasim (Arabic), Nanguan (Chinese), Boogie-woogie, and Jazz. Volume 2 promises exploration of the music of India, Iceland, South Africa, Argentina, and Japan, so this will be a very comprehensive series.

Many newer teaching materials include CDs of the music, but this one is different in that the pieces are recorded with full instrumentation, not just piano, demonstrating the instruments and rhythms often associated with each type of music. Students can play along with these recordings, making the process entertaining and enjoyable as well as educational. All of the songs are presented in two versions - one instrumental and one with vocals, all recorded by Ms Downie, who did college work at Berklee College of Music and New England Conservatory of Music and holds a degree in composition from California Institute of the Arts; she has also recorded two CDs of her original music.

Piano Traveler, Songbook 1 is available by contacting Carolyn Downie directly at carolyndownie@hotmail.com or via her website: www.carolyndownie.com. It will be available soon at www.pianopress.com and www.outboundmusic.com/carolyndownie. A portion of all proceeds from the sale of the book will go to the Moss Foundation, in support of arts education and children with special needs. As a private piano teacher, I give this book my highest recommendation and applaud Carolyn Downie for her vision as well as her artistic and humanitarian approach to music education.
October 2, 2007
Carolyn's Website Carolyn's Artist Page on MainlyPiano
Songbook Links
Amazon (referral)
This site contains affiliate links to products. We may receive a commission for purchases made through these links.
More reviews of Carolyn Downie songbooks 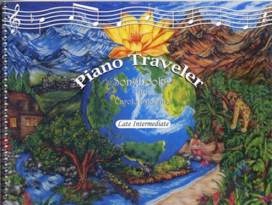