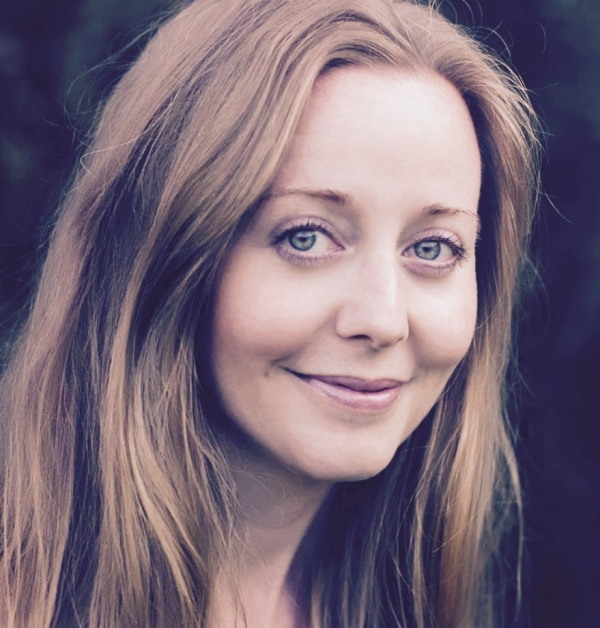 I don’t review a lot of vocal albums, but I really enjoyed Norwegian singer/songwriter Cecilie’s debut album, Fearless. With a voice that conveys gentleness, strength, sincerity, passion and vulnerability, Cecilie writes and sings about emotions and life experiences that we all have at one time or other (well, except maybe the frozen winter nights of northern Norway!). Backed by top Norwegian musicians on piano, guitars, key harp, violin, viola, mandolin, bass and drums, the eleven original songs are a very enjoyable mix of pop, folk, Celtic, world and new age music genres. I was very interested to learn that Cecilie is also a medical doctor and wanted to find out more about her. We did this interview via email in October 2018.


KP: Hi Cecilie! I think you are the first artist I’ve interviewed from Norway! Thanks for taking the time to do this! You recently released your first album, Fearless, and you have a very specific message you would like to get across with the music - especially the title track. Tell us a bit about it.


C: Thank you for this, Kathy! I'm very happy to be the first Norwegian. There is sort of a long story behind this, but I'll try to keep it short. I've had some amazing experiences the last couple of years and I believe I have become more and more aware of the fear that infuses our society. So many of our thoughts, opinions and actions are fear driven and this blocks us from being who we are meant to be, or so I feel. Making this album was my fearless project where I just thought, you know, I don't care what people think, how they judge it, if they like it or not. I'm going to do this because it's my dream. This project in itself was me letting go of my fears... and what better name than Fearless? The title track is actually a few years old and it sort of came to me out of nowhere. It was not until recently, when I was working on the album, that it actually dawned on me what this song is really about, and how it melted perfectly into my vision and my feelings at that time. Be fearless and follow your wildest dreams. 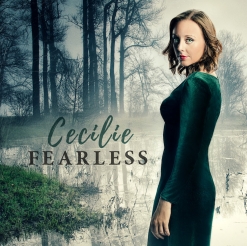 Click on the album cover to go to Kathy's review.


KP: That’s a very important message to convey - especially to young people - and I think you expressed it very well. I was surprised to find that the liner notes for the CD are in Norwegian, but the lyrics to the songs are all in English. Did you record two versions of the album?


C: There is only one version of the album. The notes being in Norwegian is actually just a practical thing. As the physical distribution was confined to Norway, I wrote them in Norwegian.


KP: Oh! so the album is only available digitally everywhere else. That makes sense! Several of the songs on the album are about difficult and/or painful relationships. Are they autobiographical or are you a good storyteller?


C: Hopefully I'm a decent storyteller and some of the songs are in fact stories, although they still draw from experiences I've had, feelings I felt and so on. A lot of the songs, on the other hand, are very autobiographical, to the point where I've had second thoughts about exposing myself and possibly others. I did have my share of love related pain, and it is truly painful, but it also lifted me to a new place so I'm not going to complain. 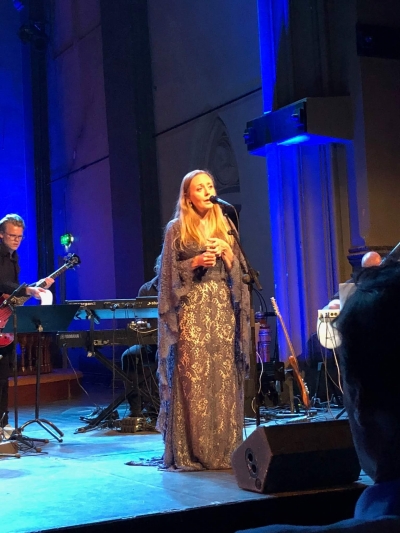 
KP: I think that comes with being human! I won’t ask you which songs are the most autobiographical! What inspires you to compose and/or write songs?


C: Touching on the same subject - a lot of my inspiration comes from my own life and my own experiences. I believe writing is my way to work through how I feel, come to peace with my experiences, translate and eventually transcend them. It makes me see things more clearly and sometimes I even understand things about myself that I couldn't see or understand beforehand. Nature is also a big inspiration, especially the northern parts of this country where I was lucky enough to spend some time. Nature has this enormous power and to just be able to hold some of that in a melody and a song for a while is really something.


KP: How long have you been writing songs?


C: I wrote my first song in 2001. I just suddenly thought that maybe I'd be able to and I tried. It worked.


KP: Do you play any instruments in addition to singing?


C: I play the piano when I write, but I don't really know how, so I wouldn't call it playing. It sort of helps me frame the melody and makes it sound a bit more like music.


KP: Do you have any plans to write instrumental music at some point?


C: No plans at this point. I feel strongly that my voice is my instrument, so for now it would feel a bit strange and unfamiliar to me to write instrumental music, but I'm not completely disregarding it either. What comes to me comes to me. 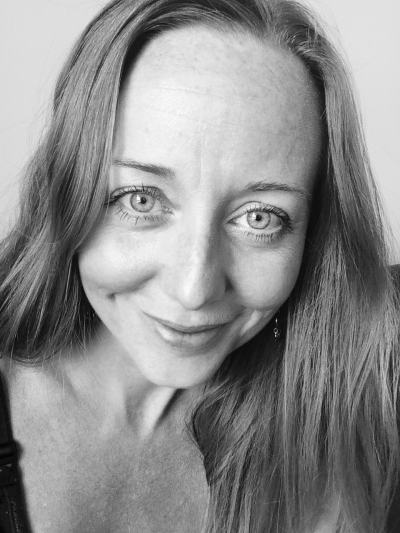 KP: Is “new age” music popular in Norway? I know Secret Garden and Kristin Amarie are from there, but I really can’t think of any other Norwegian new age artists off the top of my head.


C: New age is not popular here. Secret Garden is doing well locally, but hardly any others. I couldn't get one single local review of my album. This is a very tiny market and it's influenced by a small group of people deciding what we should listen to and like. Genres like new age hardly stand a chance.


KP: Hmmmm. That’s too bad! Let’s back up and find out more about your background. Were you born in Norway?


C: Yes, was born in Oslo, the capital, and I've lived close to or in Oslo my entire life, except for those 6 months in the north.


KP: Well, sort of. I asked when you wrote your first song. I thought maybe you’d composed other kinds of music before or after that. Moving right along! Do you have any plans for your second album? I’m not trying to rush you or anything!


C: Oh.... yes I do.... I have plans, but nothing in place yet. I'm writing and I know in what direction I'm headed. Trying to rest in that creative process that doesn't like to be rushed. 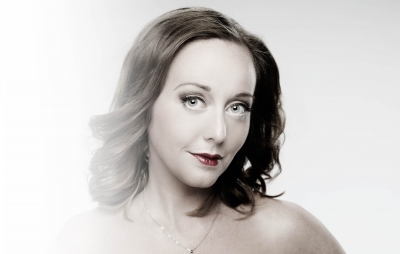 C: My sister is quite the decent songwriter and singer herself. My parents love music, but they are not musicians. I do have musicians in my family further back on both sides.


KP: When did you become a medical doctor?


KP: Are you a general practitioner or do you have a medical specialty?


C: I'm currently working mostly like a GP, but within a functional medical approach rather than a classical one. Functional medicine is not a speciality in Norway yet, and probably won't be in the near future so I'm basically working outside of the specialist system. Very typically me - always going in a different direction. 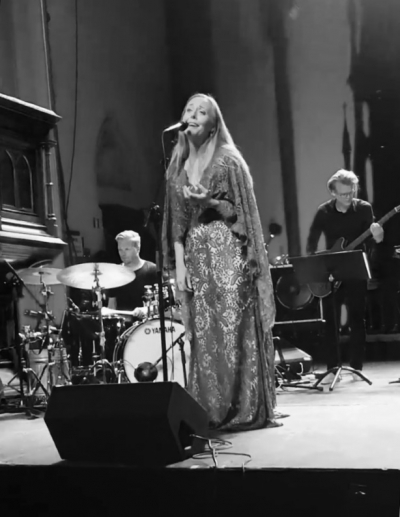 KP: That sounds familiar! I would think that having music to turn to after a difficult day of being a doctor would be wonderful. Do you sing or play an instrument to let off tension?


C: Currently I'm only working one day a week because I'm still mostly at home with my daughter. I will eventually work more, but not more than half time. The rest is music time. But yes, singing to me is a good way of letting go of tension. Dancing, too, or meditation.


C: I have so many... from my early years I listened to a lot of musicals and classical music and the big stars such as Celine Dion, Faith Hill, Lara Fabian, Mariah Carey. I love voices, Josh Groban is wonderful. The Corrs have been influential, so has Enya, Loreena McKennitt, and definitely Secret Garden.


KP: Have you done much live performing at this point?


C: I did my release concert in May and it was great. That was my first full concert doing my own music. I've been on stage a lot on different occasions, and have also done some of my own music, but not to this extent - the entire album and only me. I hope to do a concert in the early spring, but it's not entirely settled yet. 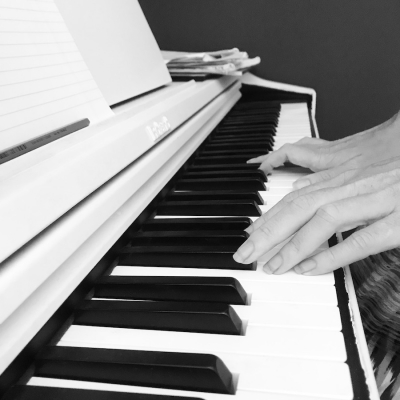 C: I believe it's the making of and the release of my first album Fearless, and everything that comes with it.


C: One of them would be to be able to pursue my dreams, continue making music and being able to make a living from doing what I love. To sing on some big stages. Having more time to work with meditation and energy and to somehow bridge that with my profession as a doctor and using it as a symbiotic approach to health and illness and healing.


C: I love the beginning of my musical journey.... and I'm really happy and honored that you wanted to talk to me and be a part of it. Thank you for that.

Many thanks to Cecilie for taking the time to chat! To learn more about Cecilie and her music, be sure to visit her website and her Artist Page here on MainlyPiano.com.
Cecilie's Artist Page • More Interviews