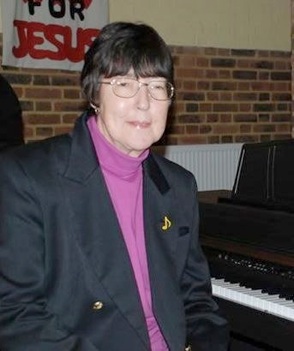 British composer/pianist Iris Litchfield recently released her fifth album in the US, Life’s Journey. A musical auto-biography of sorts, it made me fall in love with Iris’ music all over again. Iris began composing music about fifteen years ago after taking an early retirement from teaching Mathematics due to ill health. American producer and guitarist Tom Salvatori heard Iris’ music on the internet and invited her to collaborate on an album with him in 2007. That was the award-winning When Evening Falls. The rest, as they say, is music history! I thought it was time to get to know Iris a little better, so here is a recent email conversation we had:


KP: Hi Iris! How are things in England today?


IL: Today is absolutely beautiful. The sun is shining and it is quite mild. However, since I live on an island, we can have several seasons in one day!


KP: That sounds like weather on the Oregon Coast! They always say that if you don’t like what the weather is doing now, just wait an hour or two because it will change! You recently released Life’s Journey, which I love! Let’s talk about it a bit. What was the inspiration behind the music? 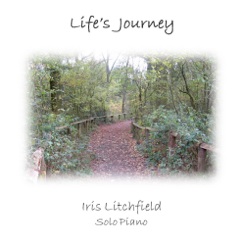 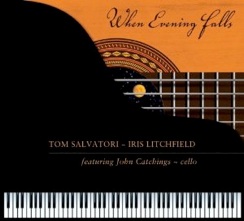 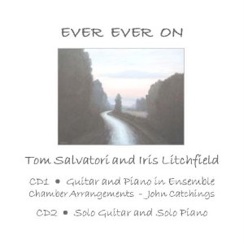 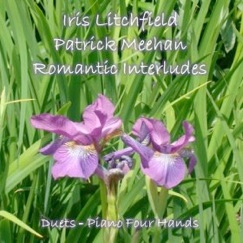 IL: I didn't really have an inspiration. I just let the music flow from me. I never know what will come to me. The theme for "A Mountain to Climb" came one day when I was cleaning my teeth!


KP: LOL!!! Humble beginnings! How many albums have you released in total? I don’t think all of them are available in the US. Is that correct?


IL: We have released five CDs in the US with Salvatori Productions. There are two additional UK CDs, but I feel these are of inferior quality as they didn't use live instrumentalists. When I first started composing - probably fifteen years ago now - I did produce another five CDs that had synthetic accompaniment where needed. North Star Music produced a German CD called Eine Pause mit Musik by DA Music - part of the InBalance series of CDs.


KP: I first heard your music on the collaborative album with guitarist Tom Salvatori, When Evening Falls, in 2007. That’s still one of my favorite albums! How did you and Tom connect originally?


IL: Tom listened to my music on the internet and asked if I would like to produce a joint CD with him, as he thought our music would go well together. We've been friends ever since!


IL: Both Tom and I had produced enough new tracks for a follow-up CD to When Evening Falls.


KP: Do you plan to do more collaborative albums with Tom?


IL: I'm sure this will happen at some point in the future.


KP: What made you decide to do Romantic Interludes, an album of classical duets, with Patrick Meehan (2012)?


IL: Patrick is my piano teacher and is excellent to play piano duets with. We both had a great deal of pleasure in producing Romantic Interludes. It contains some tracks which I believe have not been recorded before. The Schumann duets, arranged in the form of a canon by Bizet, are my favourite piano duets - very difficult to play, and the music for this suite of pieces is no longer available! Fortunately, an arrangement by Debussy is still in print!


KP: Wow! Interesting! Piano duets are so much fun! I think it’s really interesting that you are a retired math teacher. How long ago did you retire?


IL: I took early retirement 25 years ago because of ill health. My breast cancer had returned after 20 years.


KP: Very, very scary! How long had you been a teacher? 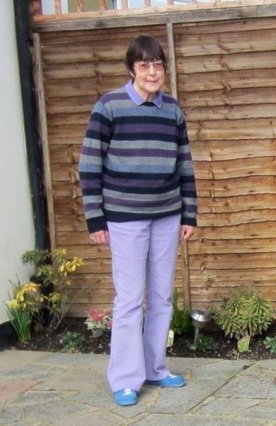 IL: I was teaching in schools for 29 years but I continue to coach Advanced Level Mathematics. It helps to keep my brain active - that and cryptic crosswords!!


KP: Has music always been a big part of your life, or mostly just since retirement?


IL: Music has always been an enormous part of my life. In fact, my life consists mainly of music, sports, and Mathematics - in this order of preference!


KP: Have you ever taught piano?


KP: Okay, let’s find out about your background and early life. Where were you born and where did you grow up?


IL: I was born near London in the UK and was in the same house with my parents for the first 18 years of my life until I went to University. 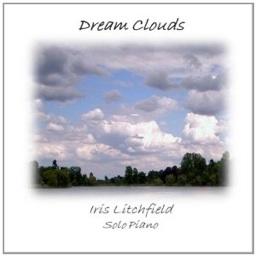 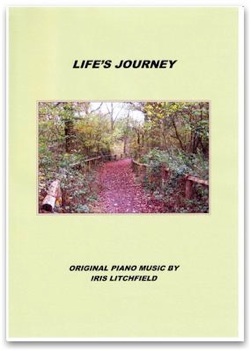 KP: Are any other members of your family musicians?


IL: My mother loved music and it was thanks to her that I love it, too. She never had the chance to play the piano as she came from a very poor background, but she would have loved to learn to play the piano.


IL: I started having piano lessons at the age of five with a formidable lady who lived in my road. Whenever I played a wrong note, she would hit me over the knuckles with a ruler. In spite of this, I passed all eight playing exams and continued to have lessons with her until I left home for University at the age of 18.


KP: I cringe every time I hear about a piano teacher using a ruler to correct piano mistakes. Were you encouraged to improvise or compose by your piano teacher(s) or anyone else?


IL: No one suggested I should compose music. I only started composing after I had taken early retirement. Sally Morris, a reader at our local Church, read one of her poems one Sunday. I spoke to her after the service and told her how much I enjoyed the poem. She said she had always wanted it to be set to music. So this is how it all started. She gave me all of her poems and I set them to music. When I ran out of poems, I wrote the music for her to write the words! We produced probably about 30 songs in this way - mainly for church use. Then I was "bitten by the bug" and started to write piano music. I've composed altogether nearly 80 short piano pieces which are now in three music books - Sunset, Breath of Spring and Life's Journey. These are available in the UK at tutti.co.uk. 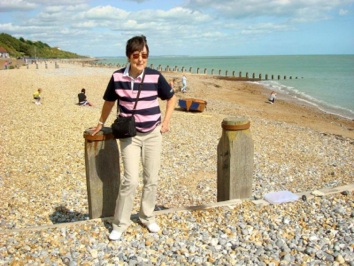 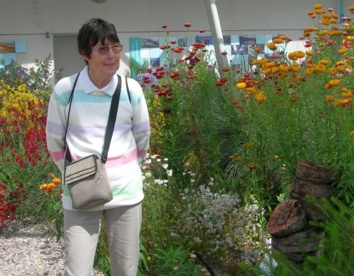 KP: Can pianists in the US order them, too?


IL: Unfortunately this is not possible at present. However I have a stock of them at home and I could post a copy to anyone wanting one. Obviously they would have to pay for the book and the postage. People who are interested in the sheet music books can email me at iris@irislitchfield.com


KP: Do you do your own sheet music transcriptions or does someone else do them for you?


IL: I am able to do it all by myself using the American programme Personal Composer, although my teacher Patrick Meehan has given me advice where needed.


KP: Those songbooks are wonderful! Do you play other instruments, too?


IL: About 20 years ago, I played the clarinet and passed all eight playing exams with this instrument. Then I took up the alto saxophone, but recently, I decided to return to the clarinet as I do prefer more classical music. It is proving to be much harder than I had imagined to get back to the clarinet, but I'm getting there slowly and have now joined a local orchestra. 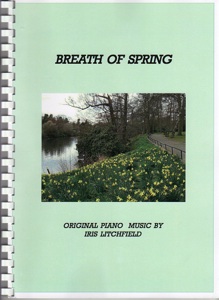 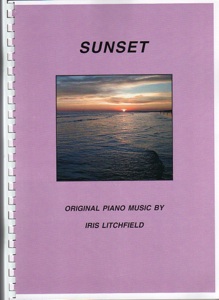 KP: How old were you when you started composing?


IL: I started composing when I stopped full-time teaching in schools due to ill health. When I retired, I was Deputy Head Teacher of a large school. This involved producing the yearly timetable - no easy job - and taking morning assembly as well as teaching half a timetable of mathematics.


KP: Did you study music in college as well as Math?


IL: At London University, I obtained a First Class Honours Degree in Mathematics. At that time, music was just a hobby for me.


KP: Do you perform in concerts very often?


IL: I have given a few concerts in the local Arts Centre.


IL: My mother was always my inspiration. Unfortunately, she died before hearing any of my music. I feel also that French composers such as Debussy have influenced the type of music I compose.


IL: "A Mountain to Climb" has been arranged by Richard Benbow in the UK as a short choral piece in the style of John Rutter, with words by Sally Morris -who is an excellent poet. It has been recorded in the studio by professional singers, but is yet to be released.


IL: I try to paint pictures using the piano as my medium. I also try to write music which is relaxing to listen to. 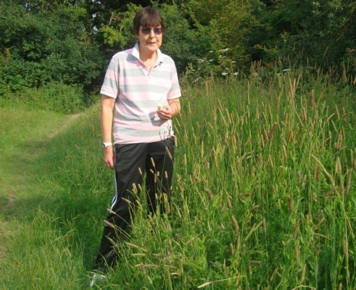 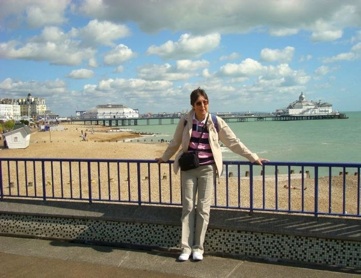 KP: Who are your favorite composers?


IL: I have to admit I haven't really got one!


IL: 1. That my breast cancer will stay in remission.
2. That some of my music could be used in films.
3. That my next composition will be the best so far!


IL: I've recently started playing golf and I should like to be able to improve my handicap! Hopefully, if my breast cancer stays in remission I should be able to do this.


KP: It seems like the worst part of cancer is that it’s always there, no matter what. Is there anything else you’d like to “talk” about?


IL: Tennis used to be a large part of my life until I fell backwards and broke my wrist and had a carpel tunnel operation. Sports continue to be important to me - watching them on TV and now trying to play golf.

I should like to finish by thanking Kathy for her continued support with my music - especially the encouraging reviews she has written for my CDs and my music books. This encourages me to continue composing!!

Many thanks to Iris Litchfield for taking the time to chat! To learn more about Iris and her music, please visit her website and her Artist Page here on MainlyPiano.com.
Iris' Artist Page • More Interviews