May already??? It is finally looking like spring around Florence, OR, with brilliant splashes of colors as rhododendrons and azaleas come into bloom all around the area. I’ll put some photos at the bottom of this newsletter with some of the beautiful plants around our yard. 2016 continues to be one of the busiest in memory with lots of new music - both recorded and printed - arriving every day. I hope your spring is going well!
As a young boy, the sound of a solo trumpet would send Mozart screaming from the room. He didn't like the sound of the flute, either.

One of Beethoven's landlords in Baden was glad to have the composer as a tenant. When Beethoven moved out, the landlord auctioned off the window shutters, which were covered with musical notation.
New Reviews: There are quite a few new reviews on MainlyPiano.com with many more coming up in May. In April, I reviewed new music from Brad Jacobsen, Lynn Yew Evers, Fiona Joy, Louis Landon, John Paris, John Fluker, and several others. I’ll have a review of Greg Maroney’s new songbook, Lake Song, in a few days. There are links to all of these and more on my homepage. Enjoy!
Peter Ilyich Tchaikovsky was always a sensitive little boy. The slightest scolding from his nanny would send him into a long sulk. She called him a "porcelain child."

For one of his recitals, Arnold Schoenberg (1874-1951) had a card printed up telling the audience that the purchase of a ticket entitled them to sit quietly and listen, but not to express their opinion of the music.

One of Beethoven's teachers was Antonio Salieri, Mozart's rival.
May House Concert: May is always extremely busy around Florence, so we’re only having one concert this month - and it will be a great one! Joseph Akins will be here on Tuesday, May 17th at 7:00 PM to perform music from his award-winning recent album, Castle Moon, as well as his other four albums. Joseph is a full professor of Music Industry at Middle Tennessee State University and is an exceptionally engaging performer.
A major star throughout Denmark and much of Europe when WWII broke out, part of pianist/comedian Victor Borge’s routine was poking fun at Hitler and other top Nazi’s. When the Germans invaded Denmark in April 1940, Borge left everything behind and fled Europe. For a while, because his mother was in the hospital, Borge put on a false beard and crossed back into Copenhagen to visit her.

Unlike Mozart, who almost never made a correction to his music once he wrote it down, Beethoven often worked on pieces for years, making many changes and corrections.
New Interview: I have a new in-depth interview with John Paris, an amazing jazz pianist who will be performing here on June 4th. John has been a lifelong musician and won Jazz Album of the Year on Enlightened Piano Radio for last year and is nominated for the same award for this year.
In operatic terms, a "prima dona" is the leading lady of an opera company. A "diva" (goddess) is a legendary or highly celebrated leading lady.

Mozart's sister, Nannerl, became a piano teacher, and often played her brother's music. She was four years older than Wolfgang, but outlived him by forty years.

In her later years, Mozart's first love, Aloysia Weber, regretfully admitted that she had never realized that Mozart was a genius, and had seen him only as a "little man."
April House Concerts: We had two spectacular house concerts here in April and one of the aspects of both concerts that I really appreciated was that the artists made it obvious how much fun music can be! On the 13th, Justin Levitt and David Glass were here from the San Francisco Bay Area to perform an evening of improvised solos and duets as well as a few previously composed pieces. Not only are both artists jaw-dropping pianists, but they were also funny and very entertaining. David even performed while lying under the piano and playing from there! They promise to return next year, and I’m really looking forward to that! Here are a few photos: 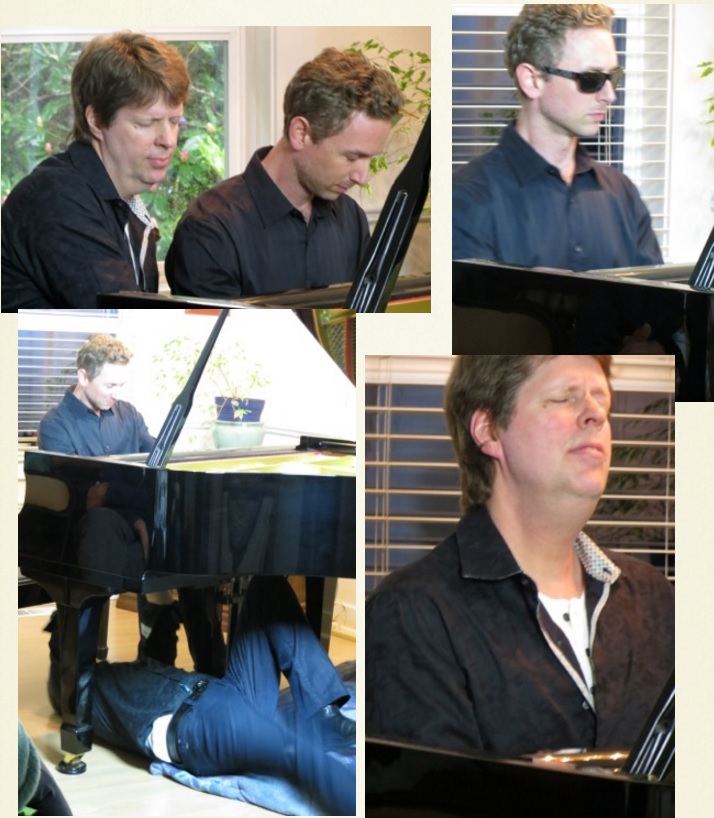 On April 27th, Jeff Lovejoy, who recently moved to the Florence community, performed a concert of rock classics from the 60’s, 70’s and 80’s. He accompanied himself on keyboard and harmonizer, but it wasn’t long before the concert evolved into a sing-along for anyone who remembered the words - and many did! Jeff has also been a musician for most of his life, performing over the years in a variety of rock bands, duos, and solo. It was a wonderful and fun evening, and I hope to make Jeff a regular in our concert series, too. Here are some photos from that concert: 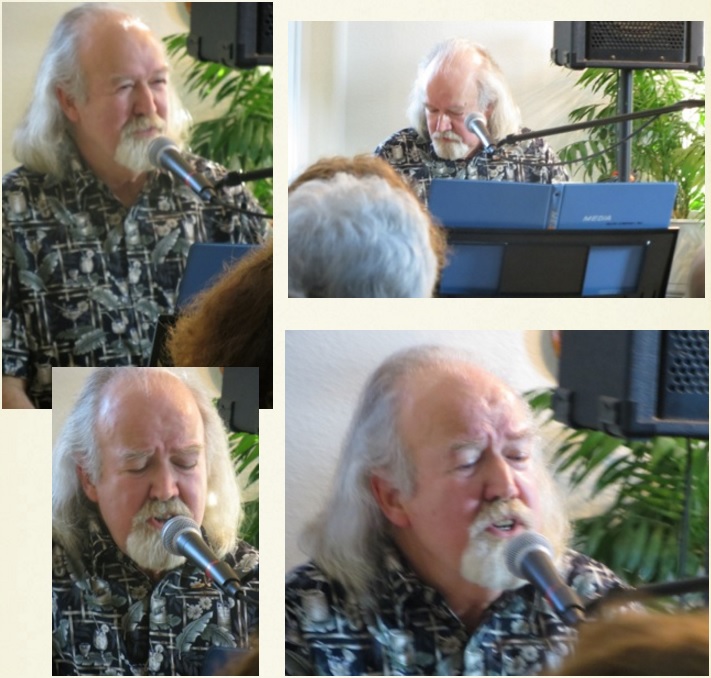 When pianist/comedian Victor Borge arrived in the United States in 1940, he was so broke that he applied for a job as a gas station attendant. He was turned down because his English wasn’t good enough.

The world’s most expensive piano was sold to an anonymous bidder for $3.22 million in an auction. The Heintzman Crystal Piano was crafted by Canadian piano manufacturer Heintzman Pianos. Built exclusively for really big and public performances, this piano was introduced to the public when Chinese pianist Lang Lang played it to a global audience of almost a billion people during the opening ceremony of the Beijing Olympic Games in 2008. To see a photo, click here.

When Beethoven was 8, his father arranged a concert to show off the boy’s talents. To make his playing even more impressive, Herr Beethoven advertised that his son was only six.
MainlyPiano.com Update: Without going into a lot of detail, I just want to mention that my website is undergoing a total overhaul. I have been using iWeb for the site since I started it, and Apple, in all its (questionable) wisdom discontinued and stopped supporting the software several years ago. I have been trying to figure out how to update the site without having to start completely from scratch (I have literally thousands of pages on the site!) and finally mentioned my concerns to the right person who has taken on the project. He expects little to no down-time, but if the site starts looking different, that’s what’s happening. He is also optimizing the site for mobile devices, so there are some very exciting upgrades on the horizon!
Mozart wrote his first opera when he was 12. When he was 11, The Archbishop of Salzburg commissioned Mozart to write an oratorio (a religious musical production that is performed without costumes or props). Suspicious that the boy would seek outside help, the Archbishop locked Mozart in a stuffy little room for a week until the work was finished.

There is actually an injury called “glissando thumb” caused by pianists sliding their thumbs up and down the keyboard too often.

Bartolomeo Cristofori was the keeper of the instruments in the Florentine Court. It was previously thought that he invented the piano in 1709, but he may have built the first one as early at 1694. He had sold three of them by 1711.
May Birthdays: Here’s a short list of May musical birthdays:
1: Lisa Downing and Janie Horton
2: Kristi Strickland
6: Louis Landon
23: Kostia
25: Adam Andrews
27: Frederic Delarue
28: Peter Kater
Happy Birthday to all of you!!!
Chopin used a metronome and encouraged his students to do so as well. This seems a little odd since there is so much rubato (flexible timing) in Chopin’s music.

In 1913, the audience at the premiere of Igor Stravinksy’s “Rite of Spring” was outraged by what they thought was a musical joke. Heckling and fistfights broke out. Today, the piece is considered a classic that ushered in 20th century music.

Ignace Jan Paderewski gave the White House’s first full solo piano recital in 1902.
I think that’s all the news for this time! Happy Mother’s Day to all of the moms! Have a great month and enjoy my rhodies below!
Kathy 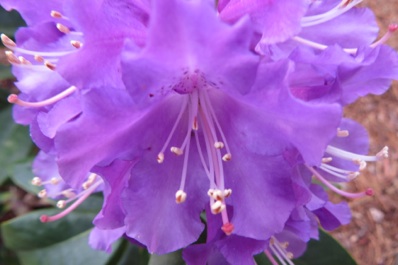 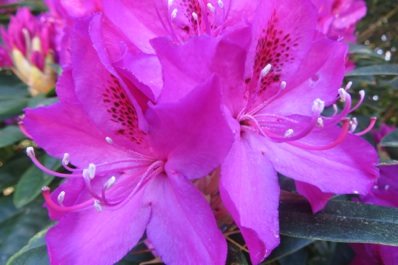 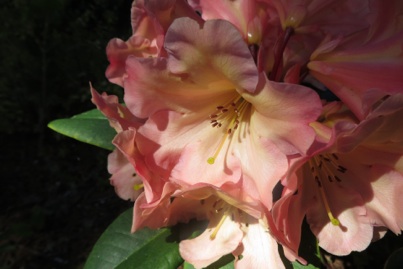 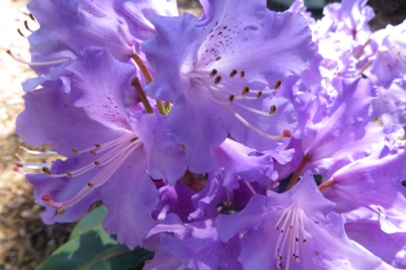 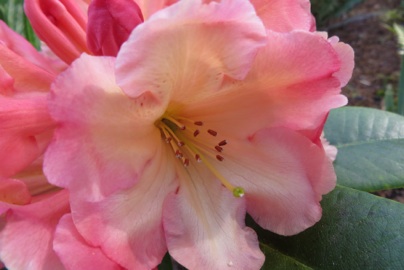