Here’s to a bright and shiny 2018 full of love, compassion, communication, understanding, peace, gratitude, tolerance, and all the laughter and music we can share. This first "Pianotes" of 2018 has a look back at 2017 as well as a look forward, lots of trivia, and much more. Enjoy!
Many advertising campaigns have catchy slogans. For years, music publishers used "brilliant, but not difficult" to describe their sheet music selections - mostly to appeal to the female players who were never supposed to play really well. The phrase first appeared in a music newsletter in 1801.

Steel piano strings and felt-covered hammers were introduced in 1826 by Jean-Henri Pape.

In 1925, Walter J. Turner predicted the "The Passing of the Pianoforte" in London New Statesman, and further predicted that the piano would be presented in a concert in 1975 as an antique instrument.
A Look Back at 2017: I had thought I was going to start retiring from teaching piano last year, but that didn’t happen. It’s interesting, though, as I started 2017 with mostly adult students, but ended the year with no adults. I’ll be starting two or three new students this month, so retirement keeps drifting away!

Joseph Akins came onboard as an occasional reviewer for MainlyPiano mid-year.

MainlyPiano.com Stats for 2017: Here are some of the numbers for the year (please keep in mind that Michael and Joseph both have full-time jobs and busy families, so I'm always very happy when they find the time to write for the site!) The numbers for 2016 are in parentheses:

Sheet music proofing and editing also grew quite a bit during the year. Yep, it was a busy year, and I’m very grateful for that!
The only German piano manufacturing facilities that were still intact after World War II were Steinway’s.

Steinway presented the White House with an ornate gold-covered grand piano during Theodore Roosevelt’s administration. It was the 100,000th piano built by the company, and now stands in the Smithsonian Institution.

Elton John won a piano scholarship to the Royal Academy of Music at the age of 11.

Looking Forward Into 2018: I don’t expect a lot of major changes this year. I will probably cut back a little more on house concerts, but plan to do two student recitals, so those should be fun. I plan to go to the Whisperings Awards Concert near Seattle, WA in early March. Robin Spielberg will open the house concert season on March 12th, and I’m really looking forward to seeing her again and hearing the new album she is releasing soon! Other than that, we’ll see what happens!
The grand piano that Broadwood and Sons sent Beethoven in 1817 still didn't have any metal in its frame. Beethoven was widely known for breaking strings when he played and his pianos didn't last long without the strength of an iron frame. As more keys were added to the keyboard, the tension on the frame was increased even more. Once the iron frame was installed, the piano could withstand tension of 18-20 tons.

An architect built an apartment building in New York in 1891 that had an upright piano built into every parlor.

The late piano virtuoso, Arthur Rubinstein, sang constantly for the first few years of his life, but he refused to speak.

Annual Favorites Lists: Michael Debbage and I are compiling our annual lists of our Favorite Albums for the year and should have those ready to post by the end of the first week in January. Lots of fantastic new music was released last year, so choosing a favorites list won’t be easy!
The first typewriters had piano-style keyboards and were the size of kitchen tables.

The original Micky Mouse Club was formed in 1929. Meetings were held in movie theaters all over the U.S. The official club song was "Minnie's Yoo-Hoo."

Of the 30 million pianos in America, about 90% are never played.

John Paris’ Christmas Concert: John Paris and his wife, Sandy, were with us the weekend of December 9th and 10th, first for my student recital on Saturday and then John’s Christmas concert on Sunday afternoon. John performed music from his three Christmas albums for both events - always a very special treat! For his concert on Sunday, he also played favorites from several of his other albums, including this year’s Jazzy Kid Songs. Here are a few photos: 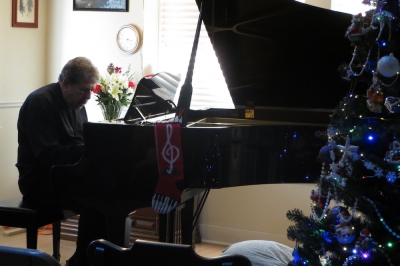 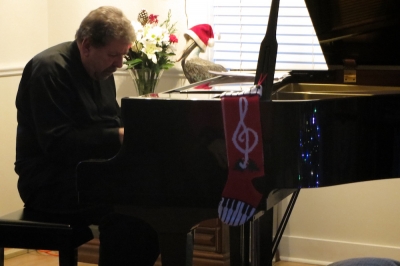 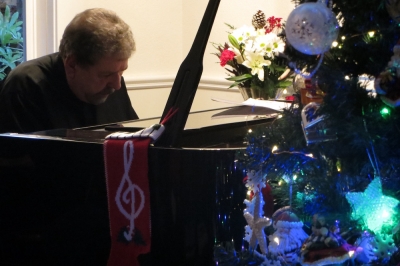 Piano tuning was a special skill after 1750, and became an occupation in the 1800's.

Hired pianists provided the "sound" for the silent movies of the early 20th century.

The first "talkie" movie was “The Jazz Singer.” It opened on October 6, 1927 and starred Al Jolson.
New Reviews: There are lots of new reviews for you this month! A total of 168 album reviews were added in 2017 plus 35 songbook reviews, 8 book reviews and 1 DVD review. It was a busy year, but the quality of music from new artists as well as established artists was often astonishing. MainlyPiano also broadened the international scope of the site with music from literally all over the world. I’m very excited about that and look forward to what’s coming in 2018!
American spinet pianos started being produced in 1935. Some of the names used to market them were “Minipiano,” “Vertichord,” and “Acrosonic.”

Karl Philipp Emanuel Bach (son of J.S. Bach) wrote a book called Essay on the Right Way to Play the Clavier which was published in 1753. In it, he devoted 45 pages to the subject of ornaments and how to play them. No wonder they are so confusing!

Soon after Abraham Lincoln’s inauguration, Mary Todd Lincoln acquired a 7-octave grand piano. It stood in the Red Room where their sons, Willie and Tad, took their piano lessons.
Interviews: I didn’t have time for any new interviews in December, but I plan to have at least two new interviews for you in January. Stay tuned!
Early upright pianos were called “giraffes” and were about 7 1/2’ tall!

By Franklin Roosevelt’s presidency (1933-45), the piano in the East Room was in need of repair, so Steinway offered to build a new White House piano as the firm’s 300,000th piano. President Roosevelt helped to design the piano which has eagle-shaped legs and paintings on the case depicting American musical scenes.

The fear of performing is called “topophobia.”
Holiday Wishes List: I added quite a few new wishes during the month of December so if you didn’t see the complete list, it will be available here until mid-January.
By 1600, engraving was the method most often used for printing music. Symbols were sketched freehand with a sharp tool onto zinc, copper, or pewter plates. The plate was inked, and the print was made.

In about 1720, John Walsh made punches for stamping note heads, clefs, and other musical symbols directly onto engraving plates.

Legend has it that "Nero fiddled while Rome burned." This has been proven to be false. The violin wasn't invented until the Middle Ages, which was centuries after Rome burned. It is more likely that Nero played a lyre.
January Birthdays: There are a lot of music-related birthdays this month! Here is a partial list:

Happy Birthday to all of you!!!!
The French horn was invented and developed in Germany.

It is very unlikely that there are any tuba players with false teeth.

If crickets had headphones, they would wear them on their knees. That’s where their ears are.
To close this issue, I’m posting some photos I took Christmas Day and New Year’s Day (today!) to show that it really doesn’t rain in Oregon all the time! The beach photos are of the beach here in town that we walk almost daily (Heceta Beach), and the bridge is our Siuslaw Bridge which is at the south end of town on Highway 101. These should give you a pretty decent idea of why I love it here so much! 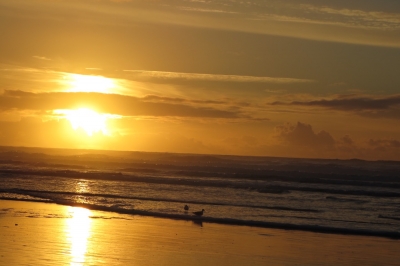 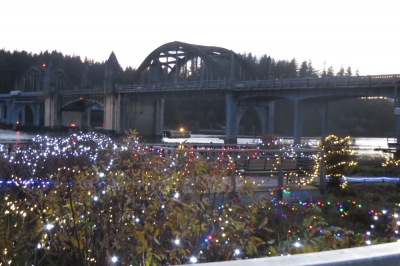 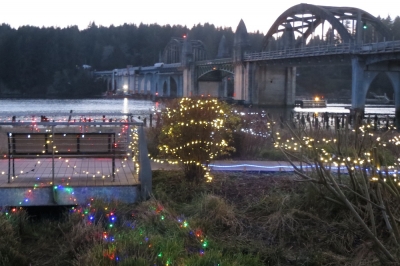 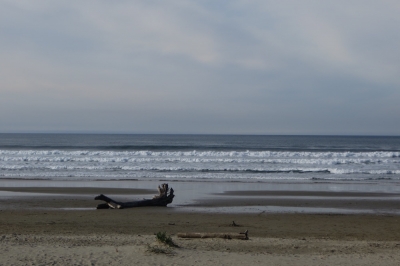 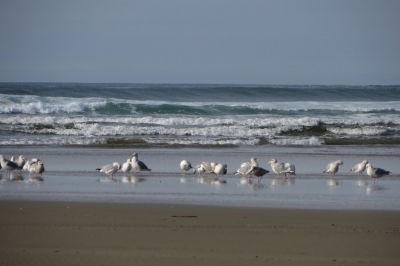