I hope your 2021 is off to a good start! I had planned to do Part 2 of my 40th Anniversary story this month, but I didn't allow myself enough time to do a good job. So, for this month, we're back to the usual music trivia/factoids, but I'll get started earlier in the month and do the second half of my story for the March issue.
Composers William Byrd (1543-1623) and Thomas Tellis were granted a monopoly on music publishing by Queen Elizabeth. This gave them the exclusive right to print any music "either played or sung" in any language. They were also the only people who were allowed to print the ruled paper upon which music is composed.

Mozart's sister, Nannerl, became a piano teacher and often played her brother's music. She was four years older than Wolfgang, but outlived him by forty years.

Dizzy Gillespie’s trademark bent trumpet came about by accident. In 1953, a fellow musician tripped over Dizzy’s horn and the bell ended up at a 45-degree angle. Gillespie liked the sound and used bent horns for the rest of his career.
New Reviews: 2021 started out with some great new albums and singles that were reviewed on MainlyPiano.com. I also reviewed two new songbooks: Michele McLaughlin's Sketches sheet music and the complete sheet music collection for David Nevue's Open Sky album. You can check them all out here.

In the next week or so, I'll be reviewing David Lanz's new Water Sign album. Sheet music for that album is in the works, too!
While he was in college, Robert Schumann had a vision that was sadly prophetic: "The moon was shining on the water. I fell asleep and dreamt that I had drowned in the Rhine." Several years later, he went out for an evening walk and unsuccessfully tried to drown himself in that same river.

Composers GF Handel and Johann Matheson were very good friends. They had a big argument once and settled it with a sword fight. Music history could have been changed when Handel was stabbed, but Matheson's sword was stopped by a button on Handel's coat.

New Interviews: I have two new interviews for you this month: Louis Landon and Todd Mosby. I really enjoyed doing both of them and think you'll enjoy learning more about these amazing artists.

In February, I plan to interview Robert Thies and Joe Bongiorno, so stay tuned! I'll be working on interviews with Gregg Karukas and Jonathan Sprout, too, so there is lots of new material coming up!
GF Handel had a rather unique way of dealing with the singers in his operas. When one of them disagreed with the way he wanted her to sing one of his arias, he held her out a window until she saw it his way.

The first jazz club was founded in Frankfurt, Germany in 1935, during the Nazi regime.

Anselm Hettenbrenner, who was at Beethoven's bedside when he died, said that in his final moments, Beethoven roused himself from his coma to shake an angry fist at the heavens. There was a dramatic clap of thunder and a flash of lightning, and the composer was dead.
Whisperings Solo Piano Radio Album of the Year: The Whisperings Album of the Year will be announced in the next couple of weeks. This year's nominees are (in the order I reviewed them):

The links go to my reviews. Very best wishes to all four nominees! The judges have their work cut out for them because all four albums are excellent!
Around 1940, John Cage developed what he called the "prepared piano." He put all sorts of different objects on the strings of the piano to change its sound. Some of the things he tried were pie plates, nails, bolts and screws, rubber weatherstripping, and pieces of paper.

Unlike Mozart, who almost never made a correction to his music once he wrote it down, Beethoven often worked on pieces for years, making many changes and corrections.

"Chopsticks" was written as a piano exercise in 1877 by Arthur de Lully. The title was the pen-name of a 16-year-old girl named Euphemia Allen.

House Concerts: A lot of people are asking about resuming house concerts. To be honest, I don't see that happening anytime soon. In fact, I'm not sure I'll be able to continue them once the pandemic is over. A lot of building has been going on in my neighborhood and a very large portion of our parking is now gone. We'll have to wait and evaluate the situation as things start to open back up. I'll keep you updated as we go! I really hope we can get back to doing them on a regular basis!
People in Mozart's time believed that regular bathing was unhealthy and used perfumes to cover up their body odors. One bath every six months or so was considered to be enough, so the stench in a crowded room must have been overwhelming!

Tchaikovsky was working on The Nutcracker when he came to New York to conduct the opening concert at Carnegie Hall (May 5, 1891).

When Beethoven was 8, his father arranged a concert to show off the boy’s talents. To make his playing even more impressive, Mr. Beethoven advertised that his son was only six.

One More Time! As I've said, volunteering at our local Humane Society is very rewarding, but it's also dangerously easy to fall in love there. And I did. Last week I brought home Thackery Binx, a seven-month old medium-hair black cat. (I've actually had a few photos of him in previous newsletters - I just didn't know at the time that I'd be adopting him.) He'd been at the shelter since he was a tiny kitten and has been a favorite among staff and volunteers. He was about ready to be adoptable but contracted ringworm (a fungus, not a parasite). I had plenty of time to really bond with him while he was being treated, and when he became available to adopt, I just had to do it. Happily, he's getting along great with the rest of his furry family as well as Mom and me, so it was a good move.
Johann Nepomuk Maelzel was an inventor. His most famous invention was the metronome. Among his other inventions were a mechanical bugler who played flat and an automatic chess player that always lost.

Along with his books of exercises for pianists and organists, Hanon composed more serious music for all levels of advancement. His piano exercises are what made him famous, however, and he won a silver medal for them in 1878 at the Exposition Universelle. Editions of the work appeared in the USA and Russia in 1900, and today it is available throughout the world. There are also adaptations available for guitar, accordion, and xylophone!

February Birthdays: Here are some musical birthdays coming up in February:

Happy Birthday to all of you!!!
When a musicians’ strike threatened to cancel a performance of Verdi’s opera “La Traviata” in Rome, Italy in June 1995, the maestro announced that he would play the score himself on the piano. Conductor Riccardo Muti conducted from the keyboard and the singers performed the arias and ensemble pieces. The audience, in turn, gave the performers wild ovations.

A story is told about Beethoven, a man not known for social grace. Because of his deafness, he found conversation difficult and humiliating. When he heard of the death of a friend’s son, Beethoven hurried to the house, overcome with grief. He had no words of comfort to offer, but he saw a piano in the room. For the next half hour he played the piano, pouring out his emotions in the most eloquent way he could. When he finished playing, he left. The friend later remarked that no one else’s visit had meant so much.

Harry S. Truman was America’s first pianist/president. He often played in public, and played on a televised tour of the newly-renovated White House.
Okay, that's a wrap for the February issue. Have a great month, Happy Valentine's Day, and stay healthy and happy! I'll post some of my latest kitty photos below since the yards look pretty awful right now! 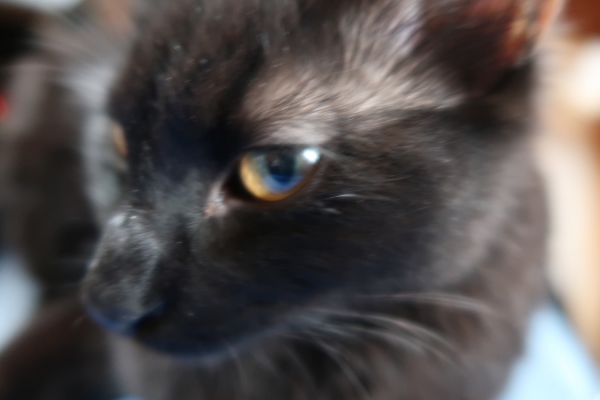 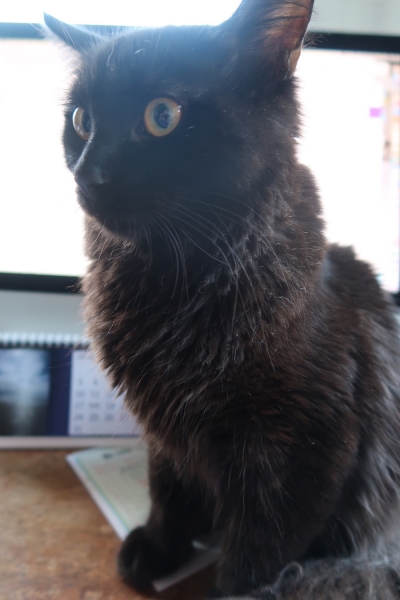 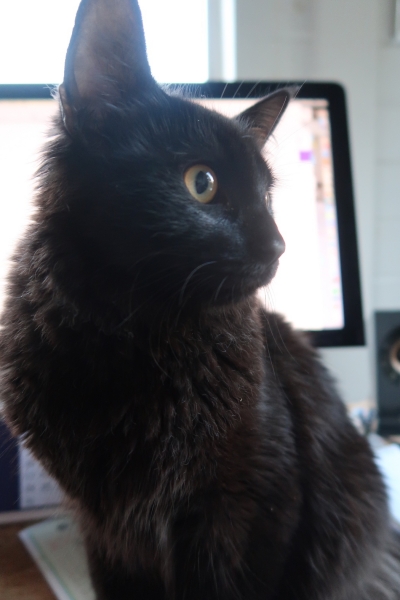 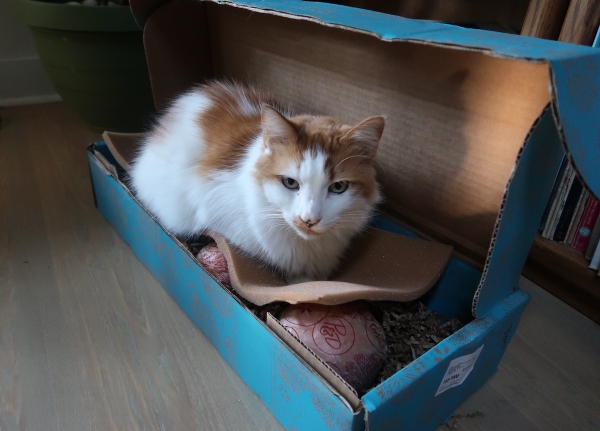 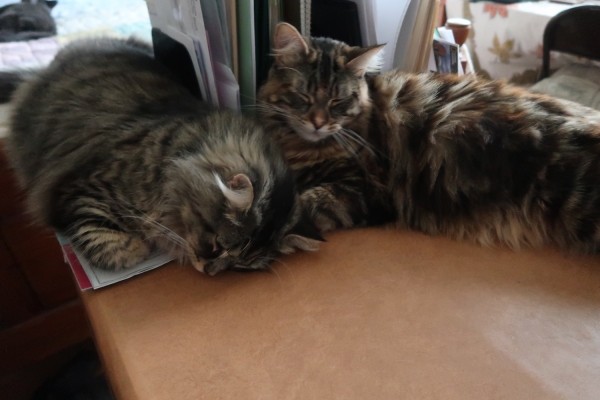 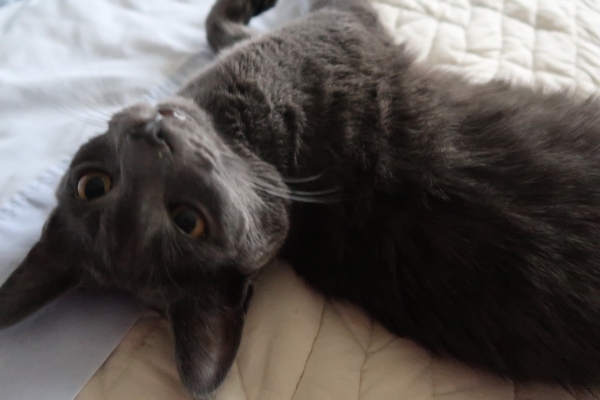 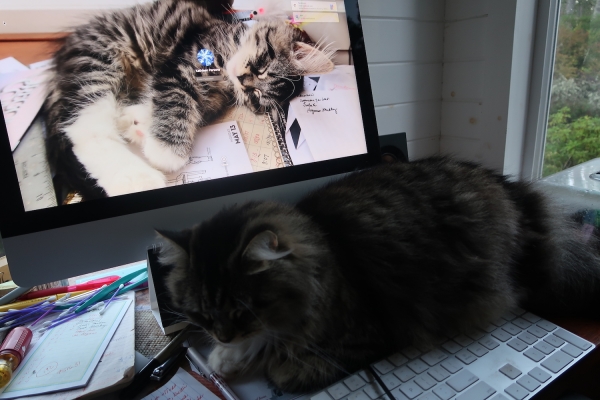