Well, here we are at the half-way point of 2022 already! I hope everyone is doing well and enjoying the early part of the summer! We are finally getting some sunny weather here and even had a Heat Advisory from the National Weather Service last weekend. Yep - it got all the way up to 80 degrees! Not exactly sweltering by most standards, but I guess it is here on the Oregon Coast! Those of us originally from other places thought the advisory was pretty funny!

The melody for “America (My Country ‘Tis of Thee)” comes from Britain’s “God Save the King/Queen.” It is the only major anthem in either country that is played in 3/4 waltz time rather than the more common 4/4 marching rhythm.

Former Louisiana governor Jimmie Davis wrote more than 400 songs, including “You Are My Sunshine.” Elected in 1944 and 1960, Davis is the only governor to be elected to the Country Music Hall of Fame.

Opera emerged in the 1600s as a privileged spectacle for the wealthy, then gradually turned into commercial entertainment for the general public.

New Reviews: We have another mixed bag of reviews for you this month! I reviewed music from Italy, Germany, Australia, and Majorca as well as the US! We even have a review of an African American artist who raps in English and Mandarin Chinese! I also reviewed new sheet music books by Chad Lawson and Tim Neumark. You can find links to all of them (and more!) here.
Franz Liszt began the tradition of using a piano bench for concerts instead of the usual hard-backed chair.

During WWII, Liverpool was the most-targeted city (after London) in Britain, and John Lennon was born during an air raid.

On April 4, 1964, The Beatles held all top five spots on the Billboard Hot 100 - the only time that has happened in the history of the chart.
New Interviews: I had really hoped to have two new interviews for you this month, but both artists are really busy, too. Check back during the month, as interviews with Chad Lawson and Bernward Koch are in process!
There were more than 300 piano teachers in Vienna, Austria in 1799.

Camille Saint-Saens was the earliest-born pianist ever to record.
July Birthdays: Here is a partial list of musical birthdays in July:

Happy Birthday to all of you!!!
W.W. Kimball was established in about 1865 as a maker of cheap, quick-selling pianos and organs. Kimball eventually became the largest piano manufacturer in the world, and were owned by a furniture manufacturer in Indiana. Kimball stopped producing pianos in 1996.

Seven octaves was the normal range on pianos from about 1850 into the 1890’s. Around that time, an additional three notes were built into the treble (higher end), giving the piano its standard eighty-eight keys.

The 1870s to the 1920s were the heyday of the piano in Western musical culture. By 1870, production of pianos had grown to about 85,000 instruments a year in the four leading piano-producing nations - Britain, The US, France, and Germany. The numbers increased constantly, and by 1910, production had reached almost 600,000 pianos a year in those four countries alone.

July Music "Holidays": Well, these aren't too exciting this month, but here are some music-related "holidays" for July:

Square pianos were the most popular style of pianos in American homes in the early 1800's. This was at least partly because their shape was the easiest to move by covered-wagon---the primary means of transporting goods for greater distances at that time.

Francis Hopkinson of Philadelphia published his "Six Songs for the Harpsichord or Pianoforte" in 1787 and claimed to be the first native-born American to produce a musical composition. He dedicated the pieces to George Washington. Hopkinson also designed the original American flag and was one of the signers of the Declaration of Independence.

Louisa Catherine Adams, the wife of John Quincy Adams, played both piano and harp. Her piano is the earliest surviving White House piano and is on exhibit at the Smithsonian Institution.

June has been a very busy month, but it didn't generate too much news - just lots of new reviews! I didn't even take very many photos, but I'll leave you with one of our Rosie who adopted us last fall. She decided this is where she wanted to live, moved right in, and took over! Have a great July 4th weekend and a terrific month! I'll add a couple of extra trivia bits, too. 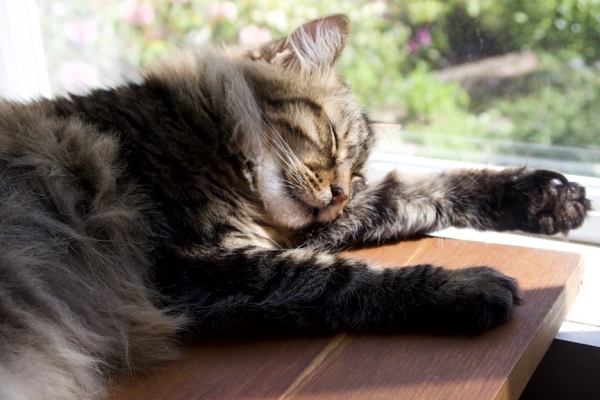 The first portable piano was designed in 1800 by John Isaac Hawkins of Philadelphia. It came with carrying handles and a fold-up keyboard.

Before 1740, building harpsichords and clavichords was a sideline for cabinet-makers. After 1740, the demand for keyboard instruments grew to the point that building the instruments could become an independent trade.

In Mozart's and Schubert's time, only people of the same sex could play piano duets together unless they were engaged or married (or they played separate pianos). Men and women were not allowed to sit that close to one another, and other than shaking hands, it was considered indecent to touch hands unless couples were engaged. A well-bred lady of the time probably would have fainted if her thigh touched a male partner's leg on the bench!

Karl Philipp Emanuel Bach (son of J.S. Bach) wrote a book called "Essay on the Right Way to Play the Clavier" which was published in 1753. In it, he devoted 45 pages to the subject of ornaments, and how to play them.

Having a piano in the home started becoming fashionable in the 1790's.