Welcome to the March issue of Pianotes! I'm not sure where February went, but we had some beautiful days with sunshine and no wind, then below-normal temperatures, and now lots of wind and rain. Who knows what's next? The weather here definitely keeps us "in the moment" because it changes so often! It could certainly be a whole lot worse, though, so I'll shut up!
18th century composer Joseph Haydn was hired as a servant of the Esterhazy family. According to a contract from 1761, Haydn was required to dress in uniform, wasn't allowed to eat or drink with his employers, needed to avoid familiarity or casual interchanges with the family and had to appear before Prince Esterhazy twice a day for orders. The prince also decided which music Haydn wrote and owned the rights to his compositions. The contract also prohibited Haydn from composing music for anyone else without the prince's explicit permission. Even so, this was considered to be one of the most desirable positions in European music at the time.

Scott Joplin’s opera, “Treemonisha,” is the only existing ragtime opera, and was given its first full production in the 1970’s - long after Joplin’s death in 1917.
New Reviews and Interviews: There are lots of new reviews this month including reviews of the four Whisperings Solo Piano Radio nominees for Album of the Year. Here is a link to all four of those reviews. You can also access them from the "Interviews and Articles" section of the homepage. I also reviewed four songbooks, so there is plenty of new reading material for you! You can access all of these reviews and more here.

I didn't have time to do any interviews in February, but hope to get back to that very shortly.

When Van Cliburn won the Tchaikovsky Piano Competition in Moscow in 1958, his victory was every American pianist’s victory. American artists who had previously figured only in national competitions were suddenly acknowledged in the international arena. A career as a pianist was finally considered valid and was respected.

It is often suggested that Mozart lived and died in poverty, but that doesn't appear to be true. He enjoyed an upper-middle-class lifestyle by the standards of the period. He had a desirable apartment in the center of the city, dressed in style, hired a coach when needed, and dined in restaurants. He paid for his barber to visit his home daily to dress and powder his hair. Any financial difficulties were due to Mozart's spending habits rather than a lack of sufficient income.

One of Cristofori’s original pianofortes, dating from 1720, still exists and is on display at the Metropolitan Music of Art’s Rare Instrument Collection in New York City.

House Concerts: I'm still not scheduling any house concerts, but things are gradually opening back up here in Oregon. The state-wide mask mandate is supposed to lift March 19th, but Florence is still having a lot of new cases. I think it's probably wise to wait for now. I'll keep you posted!
Jazz pianist Art Tatum used to practice away from the keyboard by running filbert nuts across his fingers like a magician.

Beethoven's "Ode To Joy" has been embraced over the years by the leaders of both Nazi Germany and the Soviet Union, Chairman Mao's Cultural Revolution, the Peruvian Shining Path terrorist Abimael Guzmán and the Apartheid regime in South Africa.

March Birthdays: Here is a partial list of March birthdays:

Cristofori came up with three principles still used by piano makers today, Besides inventing hammers, he developed an escapement device to permit the hammer to drop back immediately after delivering its string blow, leaving the string to vibrate freely as long as the key is held. Cristofori also invented the shifting soft pedal arrangement, called the una corda.

March Music "Holidays" and Celebrations: If you don't have enough things to celebrate in March, here are some suggestions:

March is: National Music in Our Schools Month, Play the Recorder Month, and Sing with Your Child Month.

In the decades before the invention of the phonograph, the home piano embodied almost the entire scope of musical culture. It is where songs were written, where they were performed, where they were heard by new listeners, and where they became hits or were forgotten.

Beethoven's Ninth Symphony was performed to commemorate the fall of the Berlin Wall.

Have a wonderful month! The photos this month are from the Mardi Gras Museum in New Orleans that Mom and I visited in 2003 plus two recent photos of Pepper trying to squeeze his considerable size into a box that was much too small. Enjoy!

Kathy
Although Stephen Foster built his reputation on nostalgic songs about the Deep South, he had virtually no firsthand knowledge or experience in the region.

For years, classical pianist Vladimir Horowitz would only give concerts at 4:40 PM on Sundays.

In the two years following the publication of "O Susannah," sixteen other companies released their own arrangements of the song and there was nothing Stephen Foster could do about it. He died in 1864 with 38 cents in his pocket. 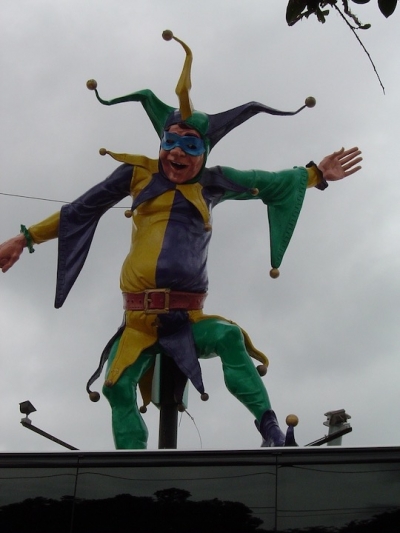 Figure on the roof of the museum. 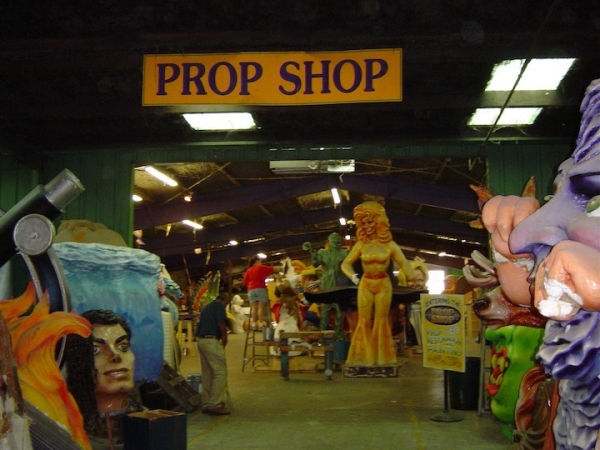 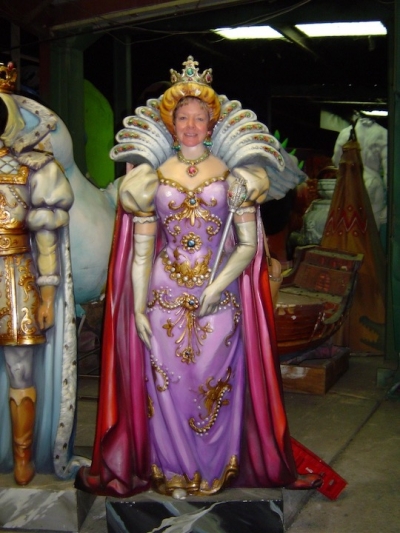 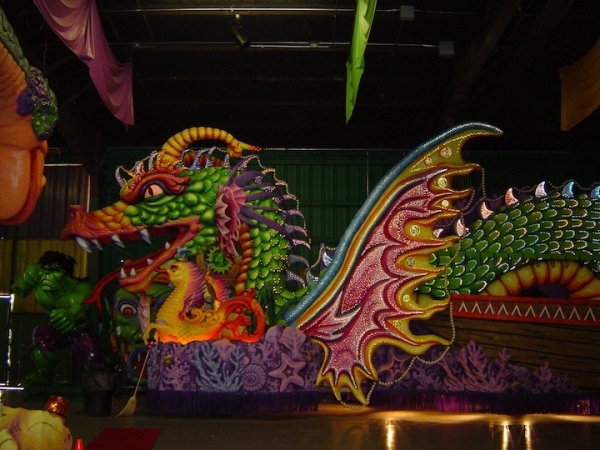 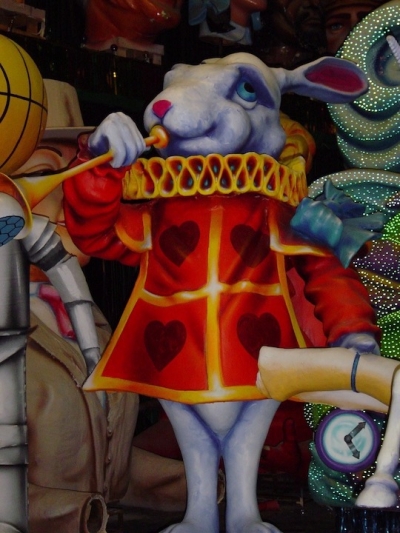 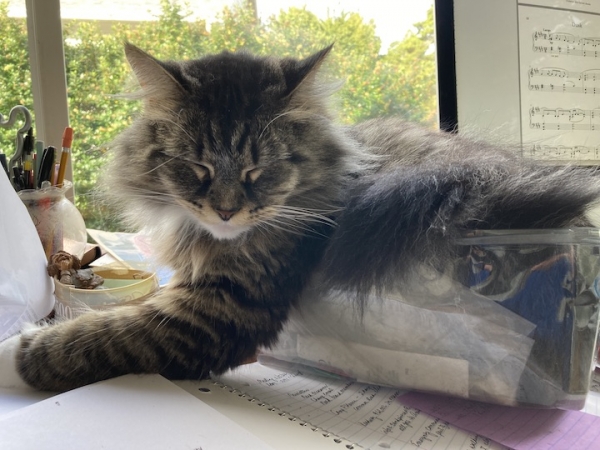 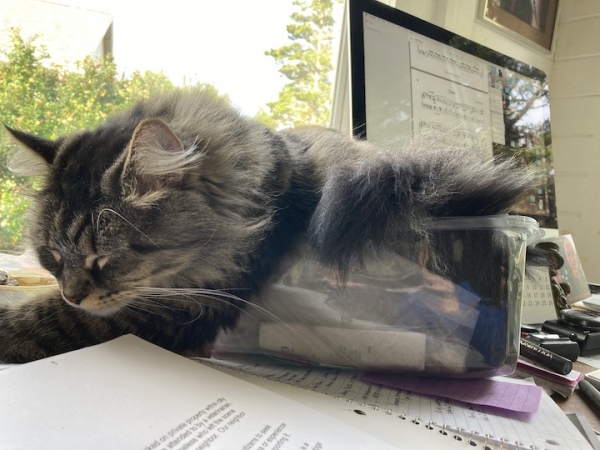 Trivia Disclaimer: To the best of my knowledge, the music trivia and "factoids" within Pianotes are true, but I can’t guarantee it.
Read more Pianotes issues:
Full list • Next Issue: Volume 468 • Previous Issue: Volume 466