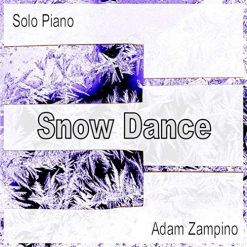 Adam's Artist Page on MainlyPiano
Album Links
Amazon (referral)iTunes
This site contains affiliate links to products. We may receive a commission for purchases made through these links.
Snow Dance
Adam Zampino
2019 / Stonesound
80 minutes
Review by Kathy Parsons
Adam Zampino’s Snow Dance is a re-worked (and much-improved!) version of his 2008 release, Piano in Motion, which combined two previous releases, In Motion and Joy In Motion. I reviewed Piano in Motion back in early 2009 and liked a lot of the music, but not so much the sound quality of the digital piano it was recorded with. As the old adage says, the third time was the charm for this album! With a whopping twenty-one original piano solos and a playing time of 80 minutes, Snow Dance has a lot to offer in terms of both quality and quantity! There is a lot of variety in the music from lighthearted happy dances to quieter music for relaxation, all played with a very expressive touch on the piano keys. All of the pieces from Piano in Motion were relearned, rearranged and newly recorded for this album. Quoting Adam Zampino: “it was actually a lot of fun revisiting the old compositions over a decade later, more experienced with clearer vision, and using modern instruments and techniques. This is the recording series that I wanted to accomplish originally.” The order of the songs is different from Piano in Motion, as are the playing times. (The original album was seven minutes shorter.) So, even if you have the original versions of any of the earlier albums, Snow Dance is quite different.

There are too many pieces to describe them all, but I’ll mention some favorites. The title track is light with a lively rhythm that swirls and dances as it sparkles and casts a chilly spell. “Unfolding Blossom” brings to mind images of a flower transforming from a bud to full-bloom - graceful and mesmerizing. “Longing For Rain” conveys the feeling of a western movie set in the desert where everything is dry and parched. Beautiful yet bittersweet with a sense of yearning, I really like this one! “Distance Between” also expresses feelings of longing, but this time they’re deeply emotional. “Walk In the Country” moves at a relaxed and easy pace that is comfortable and unhurried. “Treading Freedom” might be an exhilarating improvisation that created itself seemingly without conscious effort - I really like this one, too! The carefree spirit of “In Motion” has a catchy rhythm and a slightly bluesy attitude that I love - it makes me smile every time! “Taking It Slowly” is my favorite piece on the album. Its graceful swaying rhythm and poignant melody bring images of a dreamy slow dance where the rest of the world disappears. Love it! “Delicate Glow” has hypnotic rolling chords on the left hand and a gentle, wistful melody that could be describing flickering candlelight or moonlight on fresh snow or the first colors of a sunrise - gorgeous and very soothing. “Soothing Memories” feels relaxed and free. “Sounds of Musique” is built around of several themes and varies from simple with a gentle flow to bigger and more playful.

Hopefully Snow Dance is the start of a new chapter in Adam Zampino’s solo piano career! It is available from Amazon, iTunes and CD Baby as well as streaming sites.
February 5, 2020
This review has been tagged as:
Kathy's Picks
Adam's Artist Page on MainlyPiano
Album Links
Amazon (referral)iTunes
This site contains affiliate links to products. We may receive a commission for purchases made through these links.
More reviews of Adam Zampino albums 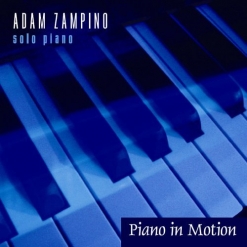