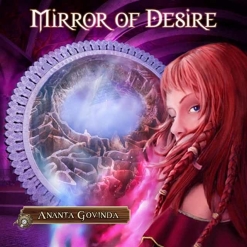 Ananta's Website Ananta's Artist Page on MainlyPiano
Album Links
Amazon (referral)SpotifyiTunes/Apple
This site contains affiliate links to products. We may receive a commission for purchases made through these links.
Mirror of Desire
Ananta Govinda
2020 / Ananta Govinda
39 minutes
Review by Kathy Parsons
Mirror of Desire is the centerpiece of a major multi-media project by Ananta Govinda, a visionary musician, author, photographer and multi-media producer. A practitioner of Vedic sciences and bhakti-yoga for more than twenty-five years, this is Govinda’s sixth album (but the first that I’ve heard). The Mirror of Desire project includes the music album, a fantasy novel trilogy (the first segment will be released in digital and printed editions on October 30, 2020), and as an immersive multi-media experience presented in a 360-degree projection dome. The eight tracks on the album are a blend of musical genres, and collaborating musicians include Will Calhoun on drums and percussion, Indubious with reggae-style vocals, Alex Liapin and Ronnie Ray on guitar, Jared May on bass, and Scott Page on sax. Govinda provides vocals, keyboards, arrangements and production in addition to composing all of the music, which is themed around the adventures depicted in the upcoming novel. Quoting Ananta Govinda:  “I truly believe that rediscovering our common heritage will help us overcome the tendency to divide and see each other on opposite sides of life.” In the Mirror of Desire story, White and Black wizards compete for access to the mysterious land of the Pyramid, journeying through the Gates of Time (and much more!). “I wanted to show that those two colors are the range of the spectrum and they could not exist without each other.” Music has always had the power to bring people together as well as to heal painful wounds, and I applaud Ananta Govinda’s very impressive and beautiful project!

Mirror of Desire begins with the title track, a song that unfolds at a relaxed tempo with a gently swaying rhythm, easy-going vocals and a nice blend of guitars, sax, flute and keyboards. “Self Writing Book” takes on a “world music” flavor with Oregon-based reggae duo, Indubious, adding vocals and chants to the powerful beat and anthemic melody. “Golden Goddess” is a dreamy piece with some beautiful flute passages over the hypnotic rhythms. “Mazes of the Mind” features Lili Haydn’s haunting vocals and violin as well as Ronnie Ray’s flute and throat singing. “Into the Timelessness” has a very other-worldly feel with shimmering atmospheric sounds, a repetitive rhythm, operatic passages by Paulette Penzvalto, and occasional sitar and orchestral strings - fascinating! “River of Time” successfully blends influences of pop, rock, East-Indian, and new age music into a slow, ethereal dance. “Room of Darshan” could easily be part of a film soundtrack with its floating ambient sounds. Gopal Krishna Balaram adds vocals to this track as well as the closing piece, “Mantra of ParaDesha,” a colorful East-Meets-West chant with Sanskrit lyrics over sax, bass, guitar, strings and percussion/drums.

Mirror of Desire is quite a varied listening experience and is exceptionally well done. I’m looking forward to following this project in its various forms! The album is available from Amazon and iTunes/Apple Music as well as streaming sites such as Spotify.
September 18, 2020
Ananta's Website Ananta's Artist Page on MainlyPiano
Album Links
Amazon (referral)SpotifyiTunes/Apple
This site contains affiliate links to products. We may receive a commission for purchases made through these links.