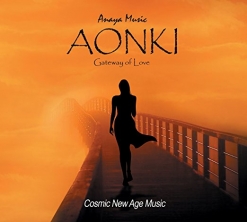 Anaya Music's Website Anaya Music's Artist Page on MainlyPiano
Album Links
Amazon (referral)iTunes
This site contains affiliate links to products. We may receive a commission for purchases made through these links.
Aonki - Gateway of Love
Anaya Music
2018 / AnayaMusic
49 minutes
Review by Kathy Parsons
Aonki - Gateway of Love is the follow-up to Anaya Music’s 2016 release, Eternity, which was nominated for Best Album in the Neo-Classical category by Zone Music Reporter. Although Aonki was released just a few weeks ago, it is already being honored with world-wide recognition and has been nominated for Best Contemporary Instrumental Album (2017) by One World Music Radio. Subtitled “Cosmic New Age Music,” this is Anaya Music’s second virtual collaboration and real-time recording in cyberspace between her label in Brazil, a live symphony orchestra in Prague (The Czech Republic), and Orchestra.net in Los Angeles. Anaya Music plays keyboards and guitars on all of the songs. She also composed, arranged and produced all of the music except for “Breath,” which was arranged and produced by Anaya Music and Steve Salani at Orchestra.net.

Aonki is the name of the Gateway of Love and came to Anaya in meditation as the driving force and guiding light for the journey of the recording. The album reflects Anaya’s belief that 2018 is a “gateway year for overcoming differences and going to the Divine aspect of life, both individually and collectively.” The warm and optimistic tone of the music is inviting and welcoming, encompassing a variety of music genres and styles. Strings are very present in all of the pieces, creating a more classical feeling despite the ambient textures and often free-form structure.

The album opens with “Laman Song,” a piece that begins like the energetic soundtrack to an adventure film, but quickly transforms into a much mellower and more peaceful mode about 30 seconds into the piece. Guitars, flutes, voices, strings, and other instruments seem to be playing several different pieces at the same time in places, but then the strings come in as a single voice at the very end, perhaps as a call to love or unification. “Breath” is much gentler and more melodic as a cello becomes the lead voice as other instruments shimmer around it. “Gate” starts with an energetic keyboard motif, followed by a solo horn with string washes behind it. The full orchestra enters for the last section of the piece, which is my favorite on the album. “Aonki Mov I” and “Aonki Mov II” comprise a two-movement suite. “Mov I” is light and very ambient with strings and woodwinds creating a soothing and peaceful atmosphere. “Mov II” is somewhat darker and more poignant while maintaining a dreamy, tranquil state. The last three tracks, “Extase II,” “Just for you,” and “A Path to the Infinite” are ambient orchestral works that are vibrant, yet very peaceful, allowing the listener to step into a world where all is well - even if only for a short time.

Anaya Music has become a very strong voice in new age music. Aonki - Gateway of Love will show you why. It is available from Amazon, iTunes and CD Baby. 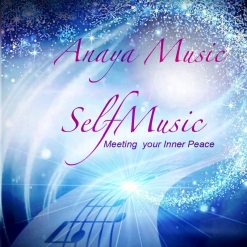 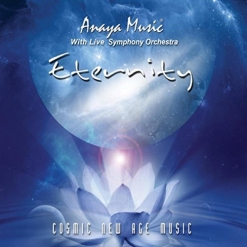 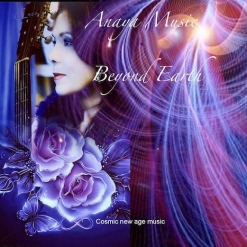