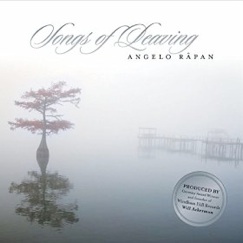 Angelo's Website Angelo's Artist Page on MainlyPiano
Album Links
Amazon (referral)iTunes
This site contains affiliate links to products. We may receive a commission for purchases made through these links.
Songs of Leaving
Angelo Rapan
2015 / Angelo Rapan
50 minutes
Review by Kathy Parsons
Although Songs of Leaving is Angelo Rapan’s debut album in the “contemporary instrumental music” category, music and the piano have been a very big part of his life from the very beginning. Born in Romania to a mother who was a classical musician herself, Angelo and his sister started music lessons at a very early age. Angelo was accepted by the prestigious George Enescu Music Academy at the age of six. At twelve, he won the first piano competition he entered, which was at the national level, and went on to win several others in Romania, Spain, and Belgium. The political climate worsened in Romania when Angelo was thirteen and his parents encouraged him to continue his studies in Spain. That meant leaving his family, but he went on to earn a degree in Music Performance at Conservatoir Royal de Bruxelles in Belgium and continued in the classical music field in both Europe and the US. Rapan has served as musical director for a variety of organizations in Belgium, New York, Hong Kong, and his adopted home of Memphis, TN. His musical repertoire reaches far beyond his classical roots, encompassing musical theater, opera, dance, Argentinian tango, world music, and now contemporary instrumental music of a “reflective, soothing nature.” Songs of Leaving was recorded at Imaginary Road Studios and was produced by Will Ackerman. Some of the eight tracks are solo piano and some include some of the stellar studio musicians who appear on many of Ackerman’s productions. This is one of those albums that moves me to the core, and I’m sure Songs of Leaving will be one of my Favorites for the year, if not the decade.

Songs of Leaving begins with the soul-stirring “As We Left,” a lyrical 8+ minute piece that begins as a flowing piano solo and becomes an ensemble piece for piano, cello, lyricon, and more - a gorgeous start! “The Light in Kristin’s Eyes” is a deeply passionate piano solo that refers to the look of hope in Rapan’s wife’s eyes as she opened them for the first time after suffering a massive stroke. Even without knowing that story, anyone who hears this piece should profoundly touched. “Remember” is much lighter, livelier and in constant motion. Light percussion, strings, and Noah Wilding’s haunting voice add tonal colors and make this heartfelt piece soar. “Places in Our Heart” is an ensemble piece that defines the words “soothing” and “peaceful.” At ten minutes, it has plenty of time to go in different directions, adding different musicians’ interpretations along the way. “Prayer” is an emotional and honest piano solo that reveals much about the composer - beautiful! “Whispering Of the Forest” begins slowly and then picks up the tempo with percussion and the soulful flugel horn of Jeff Oster. Oster also appears on “Looking Back At the Sky,” a pensive and reflective piece made even more haunting with Oster’s contributions. The closing track, Just Before,” is a graceful yet mysterious piano solo that will have you hitting the “repeat” button - breathtaking!

There are a lot of wonderful pianists in the world, but few have the magical and soulful touch of Angelo Rapan. I hope this is just the beginning of an amazing new career for him! Songs of Leaving is available from Amazon, iTunes, and CD Baby. I give it my highest recommendation!
October 16, 2015
This review has been tagged as:
Debut AlbumsKathy's Favorites: 2015
Angelo's Website Angelo's Artist Page on MainlyPiano
Album Links
Amazon (referral)iTunes
This site contains affiliate links to products. We may receive a commission for purchases made through these links.