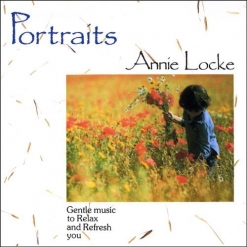 Annie's Website Annie's Artist Page on MainlyPiano
Album Links
Amazon (referral)iTunesAmazon UK
This site contains affiliate links to products. We may receive a commission for purchases made through these links.
Portraits
Annie Locke
1986 / Inner Harmonies Music
44 minutes
Review by Kathy Parsons
I recently reviewed British composer/keyboardist/pianist Annie Locke’s first solo piano album, A Glimmer of Hope, which was her fourth album and her first release in more than twenty years. Portraits was her second album and was originally released in 1986. The soothing qualities of Locke’s music have been utilized at a number of hospitals and her music has been played at the births of more than 5,000 babies. Locke is a classically-trained musician who, after a number of years working in a different field, rediscovered her passion for music in 1984 when she played her first synthesizer. In the liner notes of the CD, Locke describes her intent with this music: “It is my wish in creating this music to help you to feel more peaceful and relaxed so that you may connect with the gentle, harmonious part which is in all of us but is sometimes clouded over in moments of worry and stress or illness.” Needed now more than ever, Annie’s music provides a quiet, peaceful respite and offers a calming escape from the frantic pace of contemporary life and the daily jolts of nastiness that occur all over the world. The keyboard sounds are a bit dated, but that takes nothing away from the tranquility of the music. Most of the twelve pieces are named for a person because, at that time, Locke was giving personal sessions where she intuitively played and recorded music that became each client’s own personal music. The playing time of the tracks ranges from just under nine minutes to just over one minute. There is variety in the music from track to track, but the overall feeling is blissful. Many relaxation and healing albums are very ambient, but Locke’s music is melodious and more classically-structured than most music in that genre. She primarily used the synth voices of strings, flute and electric piano.

Portraits begins with “To Ra,” the longest track on the album. At just under nine minutes, it has plenty of time to create a peaceful, soothing atmosphere for the listener to slip into as the music works its magic. The melody is simple and the overall feeling of the piece is one of floating on a cloud or on a warm and gentle sea. “Sylvia” is a little less ambient and paints a very sweet and charming portrait of its subject. “Harp Interlude” is a brief exploration of a different keyboard sound. “Grace” is one of my favorites. A bit more poignant than the previous pieces, the bittersweet flute sound is haunting. “Marmsy Asleep” is a dreamy and magical lullaby. “A Magic Place” is lighter and more fanciful, expressing a childlike innocence. “Leprechauns” continues with a playful tone in a more Celtic style. For me, “Mike’s Country” evokes images of wide open spaces, rolling green hills and a simple way of life. “Fanfare For The Future” is a brief postlude that is quite different from the other pieces, but is a great ending to a fascinating album.

If you missed Annie Locke’s music the first time around (as I did), Portraits is a very pleasant find. It is available from Amazon (both US and UK), CD Baby and iTunes. Recommended! 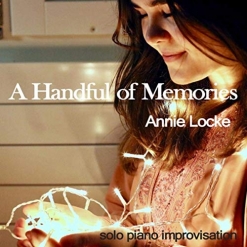 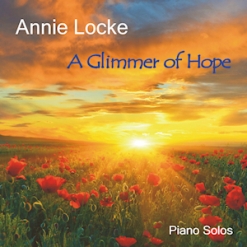