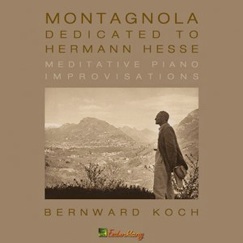 Bernward's Website Bernward's Artist Page on MainlyPiano
Album Links
iTunesAmazon (referral)
This site contains affiliate links to products. We may receive a commission for purchases made through these links.
Montagnola: Dedicated to Hermann Hesse
Bernward Koch
2008 / Erdenklang
48 minutes
Review by Kathy Parsons
Montagnola: Dedicated to Hermann Hesse is a very different album from German pianist/composer Bernward Koch, known in the US primarily for his light and beautiful releases on the Real Music label. The primary difference with Montagnola is that it is improvised solo piano. Hermann Hesse (1877-1962) is the most widely-read German-speaking author of the 20th century, and Koch has been an avid reader of his works since childhood. Montagnola is the place where Hesse retreated to make a fresh start in 1919 after a life crisis caused by WWI and is where he wrote some of his best-known works, such as Siddartha, Steppenwolf, and Narcissus and Goldman. The dedication of this album to Hesse is to be understood to be a symbolic fresh start, a meditation, and an inner retreat, following Hesse’s motto, “Be yourself.” The music ranges from very delicate and serene to bolder and more experimental. To understand Koch’s approach to this music, I quote from the interview he did with Stephen Cairns for the Piano-Heaven website: “I sat at the piano without any ideas. It was a risk, but one that I felt I should take, like a live concert in a wonderful atmosphere. The recording room was the Ratssaal at the town hall in Wenden, NRW. There is a very pleasant sound in this cherrywood boarded room with a nice view of a green valley. Only the recording engineer (Sebastian Meyer) and I were in the whole building, so we had the right silence and the best ambience to get my full concentration with the keys, to channel the music.”

Montagnola begins with “Thank You For Your Love,” a warm, gentle love song that overflows with grace and tenderness. The title track is understated and very dreamy, expressing an overwhelming hope and desire for peace - gorgeous! “Dream” is also a quiet, heartfelt beauty that comes from very deep within - a favorite. “Little Ark” is another favorite, dreamy and serene, taking us away from our worries. “Playing Children” is one of two tracks that are shorter than a minute - perfect in their brevity. “Longing” is almost mournful in its deep emotion. “Maulbronn” refers to a monastery that was built during the Middle Ages in the town of the same name. Dark and imposing, it only hints at its many stories. “Snow Is Coming” is very different. During the recording session, Koch looked out the window and saw snow blowing down from the hills. Within seconds, the air was filled with snowflakes causing the piano keys to dance along with them. “Black and White” is a lovely ballad of light and shadow - like the keys on the piano. “A New Life” closes this beautiful album true to Hesse’s motto: “Be yourself.”

Montagnola: Dedicated to Hermann Hesse is a must for Bernward Koch’s many world-wide fans. The physical CD is available in the US as an import, but download versions are available from Amazon and iTunes as well as from bernwardkoch.com. Strongly recommended!
April 4, 2010
Bernward's Website Bernward's Artist Page on MainlyPiano
Album Links
iTunesAmazon (referral)
This site contains affiliate links to products. We may receive a commission for purchases made through these links.
More reviews of Bernward Koch albums 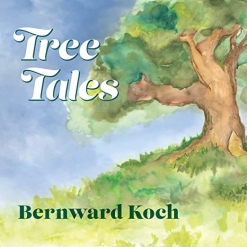