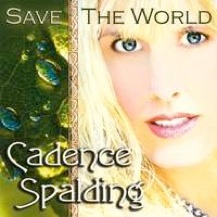 Cadence's Website Cadence's Artist Page on MainlyPiano
Album Links
Amazon (referral)iTunes
This site contains affiliate links to products. We may receive a commission for purchases made through these links.
Save the World
Cadence Spalding
2009 / Sound Manipulations
CD: 49 minutes
DVD: 52 minutes
Review by Michael Debbage
The year 2007 was when the listener public was first introduced to Cadence Spalding when she was prominently featured on Mars Lasar’s stellar Christmas album, A Star Is Born. A lot can change in two years and Save The World is clear evidence of such radical changes with a role reversal of Cadence Spalding’s solo debut featuring Mars Lasar essentially as the producer. And a dazzling solo effort it is, emphasizing the fact that the starlet is fast becoming her own shining star.

Save The World is a generous CD/DVD package that spotlights Cadence Spalding both as a vocalist and an instrumentalist who is more than capable of playing the keyboards and the violin. The latter can be heard on the silky smooth “Here To Love You” and the epic closer “Kyrie Eleison” which is essential a re-working of “El Capitan” from Mars Lasar’s "Yosemite" album. Cadence also re-works Lasar’s “See Me” that transforms into the rhythmic and soulful title track that brings to mind the influences of U2 in a more conservative fashion.

Otherwise, the album prominently features the exquisitely sweet intoxicating talents of Spalding who writes the balance of the songs on her own. The album focuses on her sea of voices unified into an almost choir of Cadences. In fact, the sleeve notes indicate that the album includes a blending and layering of over 10,000 voices. Needless to say the effects at times are exhilarating and are more than capable of being sweet and seductive all at the same time. The classic example can be found on the mesmerizing “Grandma’s Song,” though the simple title would certainly seem to contradict this, as does the closing frames of its visual counterpart on the DVD.

Speaking of the DVD, the “What A Wonderful World” theme is clearly the artistic expression of Spalding’s love for Mother Earth and its finite and precious capability of being our dwelling place. Much like the production values of the audio presentation, Lasar, a photographer in his own right, most likely had significant input on the visual delight.

While production efforts are credited to both Cadence and Mars Lasar, Lasar’s trademark sound manipulations are omnipresent. But unlike "A Star Is Born," the main event is certainly the mesmerizing voice of Cadence Spalding. Along with her love and passion for Mother Earth as well as her trust and faith in that which we cannot see, Save The World is all about a star that has already been born and now shows every inclination of blossoming very quickly into a household name.
February 20, 2009
This review has been tagged as:
Debut AlbumsMichael's Favorites: 2009
Cadence's Website Cadence's Artist Page on MainlyPiano
Album Links
Amazon (referral)iTunes
This site contains affiliate links to products. We may receive a commission for purchases made through these links.
More reviews of Cadence Spalding albums

Save the World
2009
Review by Kathy Parsons
Debut Albums