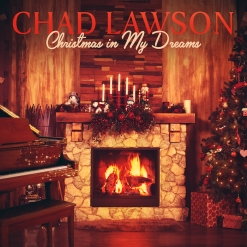 Chad's Website Chad's Artist Page on MainlyPiano
Album Links
Amazon (referral)Apple/iTunesSpotify
This site contains affiliate links to products. We may receive a commission for purchases made through these links.
Christmas In My Dreams EP
Chad Lawson
2021 / Decca
12 minutes
Review by Kathy Parsons
Chad Lawson's Christmas In My Dreams EP is a collection of four Christmas classics "reimagined." Two pieces are orchestrated, one has vocals, and two are solo piano. I first heard Chad play the piano live ten years ago, and his amazing piano touch literally stopped me in my tracks. To say he's gone on to bigger and better things is a huge understatement, and it's a joy to see such a gifted artist among the most celebrated contemporary pianist/composers today.

"Christmas In My Dreams" begins with a "duet" of "Silent Night" played with the late vocalist, Dinah Washington (1924-1963). Also released as a single, Lawson accompanies the vocal track of Washington's beautiful version of the song. With full orchestration and other background vocals, the piano is not the "star" of this track, but plays a strong supporting role in bringing out the beauty of Dinah's vocals. "Have Yourself A Merry Little Christmas" is also orchestrated, but Chad's piano is front and center with the sentimental grace that makes the song a favorite for so many people. This version has an "old-time" feeling very reminiscent of the style of popular music at the time the song was written (1943). I wasn't familiar with "The Christmas Waltz," which was composed by Sammy Cahn and Jule Styne for Frank Sinatra in 1954. Sinatra released it on the B-side of his recording of "White Christmas" and it has been recorded by many other artists since then. Chad's arrangement is a gentle solo piano waltz that evokes images of a romantic couple dancing in the moonlight. My favorite of the four tracks on this EP is Chad's solo piano "I'll Be Home For Christmas." His velvety touch on the piano keys really comes through on this one, as does the deep emotion he expresses so effortlessly. There is nothing fancy about this arrangement - it is slow and spare, but deeply heartfelt. I've heard a lot of versions of this song, and Chad's is my favorite.

"Christmas In My Dreams" is short, but very sweet and available from Amazon, Apple Music/iTunes and streaming sites like Spotify. The "Silent Night" single is also available from those sites.
December 6, 2021
This review has been tagged as:
Holiday AlbumsHoliday Albums: 2021 (and singles)
Chad's Website Chad's Artist Page on MainlyPiano
Album Links
Amazon (referral)Apple/iTunesSpotify
This site contains affiliate links to products. We may receive a commission for purchases made through these links.
More reviews of Chad Lawson albums