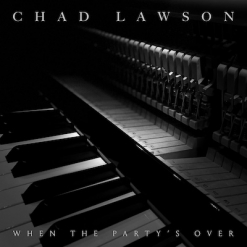 Chad's Website Chad's Artist Page on MainlyPiano
Album Links
Amazon (referral)Apple MusicSpotifyYouTube video
This site contains affiliate links to products. We may receive a commission for purchases made through these links.
When The Party's Over (single)
Chad Lawson
2020 / Decca Records
3 minutes
Review by Kathy Parsons
Billie Eilish’s 2018 release, “When The Party’s Over,” is the latest solo piano single from pianist/composer Chad Lawson, one of my favorite pianists. I think Chad explains it best: “A great song is a great song no matter the genre or instrument. When i first heard this track, i was geeking how FINNEAS crafted such a unique melody based on his chordal theme; so creative. Add Billie's unabashed vulnerability to the mix and you have the artistic marriage of head & heart. I knew this song would resonate with just a piano.” Recorded with the soft pedal of the piano on and perhaps some additional muting of the piano strings, the piano sound strongly suggests the wispy vulnerability of Eilish’s voice. The muting also creates a more ringing, echoing sound and allows the clicks and other sounds from the piano action to come through as part of the music. I might mention that Chad Lawson was using this muting technique on his piano quite a number of years ago (before it became popular) so that he could play his piano into the night without waking up his family!

“When The Party’s Over” also has a YouTube video where you can see how Chad’s piano is set up. The single is available from Amazon, Apple Music and streaming sites like Spotify.

January 10, 2021
This review has been tagged as:
Single Release
Chad's Website Chad's Artist Page on MainlyPiano
Album Links
Amazon (referral)Apple MusicSpotifyYouTube video
This site contains affiliate links to products. We may receive a commission for purchases made through these links.
More reviews of Chad Lawson albums