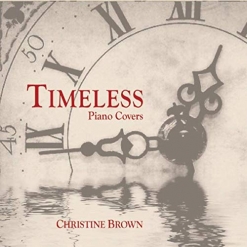 Christine's Website Christine's Artist Page on MainlyPiano
Album Links
Amazon (referral)iTunesSongbook Review
This site contains affiliate links to products. We may receive a commission for purchases made through these links.
Timeless
Christine Brown
2019 / Key Image Music
63 minutes
Review by Kathy Parsons
Timeless is pianist/composer Christine Brown’s fourth collection of solo piano “mash-ups” (medleys, actually!) that combine favorite pop (or Christmas) tunes with well-known classical pieces. The first of these was A Classic Christmas (2012) followed by Seamless (2016) and A Classic Christmas II (2018). Christine is especially clever at how she makes seemingly unrelated music fit together and flow “seamlessly.” As usual, her touch is graceful and expressive, and it is easy to hear the love she feels for these songs. The pop songs are an interesting combination of rock classics and much more recent hits, making this an album that should appeal to listeners in a broad age range - especially those who will stream or download their favorites one song at a time rather than buying or downloading the whole album.

Timeless begins with Ed Sheeran’s beautiful ballad, “Perfect,” partnered with Beethoven’s “Moonlight Sonata.” You have to listen for “Moonlight,” but it’s there. “Shallow” from the most recent A Star Is Born movie is paired with Edith Piaf’s “La Vie en Rose,” a surprising combination that smoothly weaves phrases from each song into an elegant new piece. “Nights In White Satin,” the Moody Blues’ classic, has been a favorite of mine since it was first released, so it’s intriguing to hear how Brown successfully blends it with Claude Debussy’s “Clair de Lune,” again weaving phrases from the Debussy piece with the pop classic. Brown arranged Freddie Mercury’s “Bohemian Rhapsody” as a heartfelt stand-alone piano solo - a favorite! The Beatles’ “Let It Be” gently and gracefully combines with “Aria” by Johann Kuhna (a piece I was not familiar with). It is said that you can walk around any city in the world and someone will be playing Beethoven’s “Fur Elise.” In another standalone arrangement, Brown takes familiar passages from this iconic piece and makes them her own rather than playing the piece as it was originally written - also a favorite (a huge compliment from a piano teacher!!!). Journey’s “Open Arms” and Debussy’s “Reverie”? Believe it - they work seamlessly together in Brown’s very creative hands! An even more amazing combination is Franz Liszt’s “Liebestraum” and Elton John’s “Your Song,” and they also flow together perfectly. Joni Mitchell’s “Both Sides Now” is another old favorite of mine, and it’s paired with “Canon in D.” The Canon isn’t obvious, but small bits of it are interspersed throughout the song. The album liner notes list Cyndi Lauper’s “Time After Time” and Bach’s “Minuet in G,” but I also hear bits of “True Colors,” also by Cyndi Lauper - a very tender, loving combination. “Scarborough Fair” is actually an old folk song that became popular again in the 1960’s and was a big hit for Simon and Garfunkel. Brown’s expressive arrangement is gorgeous and made me fall in love with the song all over again. The album closes with Christina Perri’s hit, “A Thousand Years” and Robert Schumann’s “About Strange Lands and People,” a sweetly wistful ending to an exceptionally good album.

Timeless is available from www.ChristineBrownPiano.com, Amazon, iTunes and CD Baby as well as many streaming sites. A solo piano songbook is also available as a physical book or as a download from Christine’s site (review coming soon!).

June 26, 2019
This review has been tagged as:
Kathy's Picks
Christine's Website Christine's Artist Page on MainlyPiano
Album Links
Amazon (referral)iTunesSongbook Review
This site contains affiliate links to products. We may receive a commission for purchases made through these links.
More reviews of Christine Brown albums 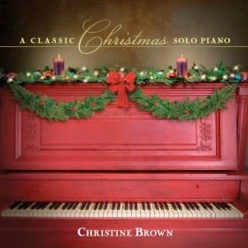 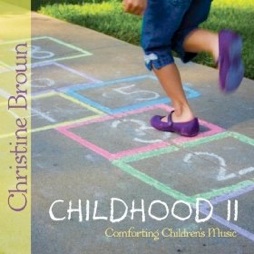 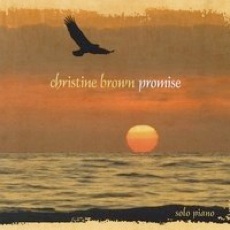