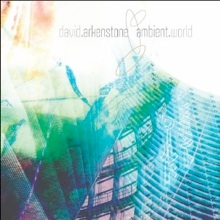 David's Website David's Artist Page on MainlyPiano
Album Links
Amazon (referral)iTunes
This site contains affiliate links to products. We may receive a commission for purchases made through these links.
Ambient World
David Arkenstone
2011 / Domo Records
Disc 1: 63:32
Disc 2: 66:24
Review by Michael Debbage
Multi-instrumentalist David Arkenstone began his recording career back in 1987 with the impressive debut Valley In The Clouds followed up 3 years later with the notable Citizen Of Time. In 1994 Arkenstone released Another Star In The Sky and much like the two previously mention albums his compositions had some elements of the ambient genre. Such influences were less obvious in his subsequent recordings until 2007 when he released Myths and Legends which also had textures of the genre. But not until now has David truly set his mind to fully experimenting with the Ambient World courtesy of this double disc conception.

David opens the album with the imaginatively titled “Acquiring Satellites” though the song itself is probably one of the more structurally solid songs on the album. As you dig deeper into the album the tracks begin to show a greater emphasize in textures and sketches than tonality and structure. Check out “Liquid Sky” that has a slow and purposeful bass line that is accompanied by what sounds like a smorgasbord of tools being used in the background. In complete contrast there is the hypnotic beat of “Shinkansen” that keeps Ambient World rotating on its axis of the great unknown as Arkenstone continues to explore this whole new musical planet that he has now fully embraced. In complete contrast there is the atmospheric and gliding “Filtered Sunrise” that is non invasive and will allow you to escape from all your worries even for just a moment or two.


A similar pattern is followed on disc two with the synchronicity of “Tunnels” to the floating and almost gravity defying arrangement of “Water Birth” all the way to the almost chaotic “Collective Dream” that appears to be living on the frenzy edge of a collective nightmare. And David closes out the album with his laid back Mark Knopfler guitar impersonation on “The Lazy Train”. With no credits to any other musician it appears all of the composing, producing and performance is by Arkenstone himself. Though one exception is Eiichi Naito who is credited as the executive producer also the founder of the impressive independent record label the Domo Music Group formed back in 1993.

Have you heard the expression that a truly great vocalist could sing from the Yellow Pages and still sound inspiring? The same can be said from some instrumentalists that no matter what project or genre they take on the music is either creative or moving. Not a complete stranger to the ambient genre, David Arkenstone has flirted with this particular array for years but never in the direct and complete dedication that is represented on Ambient World. While the album may not be as emotionally moving as some of his other handiwork, Ambient World reflects an artist willing to totally stretch himself and create a detailed project of supple nuances resulting as David would say a “soundtrack for your imagination”.
January 1, 2011
This review has been tagged as:
Michael's Favorites: 2011
David's Website David's Artist Page on MainlyPiano
Album Links
Amazon (referral)iTunes
This site contains affiliate links to products. We may receive a commission for purchases made through these links.
More reviews of David Arkenstone albums