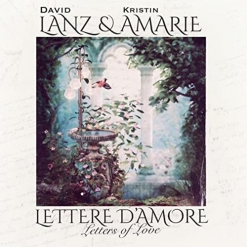 David's Website David's Artist Page on MainlyPiano Kristin's Website Kristin's Artist Page on MainlyPiano
Album Links
Amazon (referral)Apple Music/iTunesSpotify
This site contains affiliate links to products. We may receive a commission for purchases made through these links.
Lettere D'amore - Letters of Love
David Lanz and Kristin Amarie
2022 / Kristin Marie Lanz & David Lanz
36 minutes
Review by Kathy Parsons
Lettere D'amore - Letters of Love is the latest collaboration from husband and wife duo David Lanz and Kristin Amarie. The ten original tracks feature Kristin's soaring vocals and David's piano as well as Charlie Bisharat on violin, Cameron Stone on cello, Hector Ulisses Passeralla on bandoneon, and European singing star Alex Panayi; David Arkenstone produced the album. As a very long-time fan of David Lanz's piano music, it's a bit disappointing that David's piano is mostly part of the ensemble and rarely in the foreground. That said, artists often go in new directions to spread their wings and continue to grow - I just miss David Lanz, solo pianist! The ten pieces are all beautiful and very expressive. Four are instrumentals and two of those are instrumental arrangements of songs that also appear on the album (with vocals).

Lettere D'amore - Letters of Love begins with the title track, an instrumental piece featuring piano (Lanz), violin (Bisharat), cello (Stone) and background vocalizations by Kristin. This was actually the last piece composed for the album. David and Kristin wanted to encapsulate all of the different feelings and moods expressed in the album and created this piece as something of an "emotional overture." The big symphonic sweep of the music lets the listener know right away that this album is going to be quite different from either of the Lanz's previous albums - solo and/or together. "Il Guardino Incantato (The Enchanted Garden)" appears as a vocal duet with Kristin and Alex Panayi (sung in both English and Italian) and later as an instrumental. "Aria" began as a piano solo and the duo added lyrics later. It tells the story of Aria, the goddess of the air and of the singing voice. Kristin's soprano voice really soars on this one! "Sonata" was also originally written for solo piano, but became a song professing love to the spirit of music. A duet with Kristin and Alex Panayi, Kristin's daughter, Zoe Emma, also sings on this track. "Matters of the Heart" appears first as an elegant instrumental and later as the closing track, "Cosi Di Cuore," sung with deep passion by Kristin in Italian. "One More Night" began as a piano solo but evolved into a deeply emotional story of two lovers whose greatest desire is to spend one more night together. Sung in both Italian and English, Kristin and Alex could melt rocks with this one! "Alone" is a passionate solo by Kristin that features master bandoneon player, Hector Ulisses Passarella. "Lovers' Bridge (Ponte Dell'amante)" first appeared on David's 2020 solo piano album, Water Sign. For this album, the piece became a beautiful trio for piano, violin and cello. The instrumental version of "The Enchanted Garden" is also a trio for piano, violin and cello - I really love this one!

Lettere D'amore - Letters of Love Is available on CD from David's and Kristin's websites. It is also available to stream and/or download from Amazon, Apple Music/iTunes and streaming sites such as Spotify. 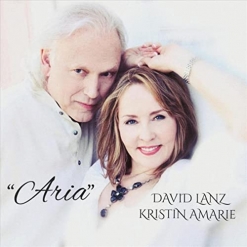