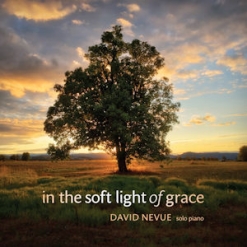 David's Website David's Artist Page on MainlyPiano
Album Links
Amazon (referral)iTunes
This site contains affiliate links to products. We may receive a commission for purchases made through these links.
In The Soft Light Of Grace
David Nevue
2019 / Midnight Rain Productions
57 minutes
Review by Kathy Parsons
One of the facts of life for any artist is that difficult times often inspire their best work. One example is David Nevue’s Overcome (2005), which was created out of the emotional journey of losing his father in 2003. David has released many great albums both before and after that, but there is something extra special about Overcome. Similarly, In The Soft Light Of Grace is dedicated to the memory of David’s mother, who passed away last year, but it is also the story of his journey with some health and pain management issues, having his faith tested and restored, and a turning point in his creative life. That’s some pretty heavy stuff and David has been walking several miles a day for the past three years to help come to terms with it through deep thinking, prayer and simply being in nature. In the liner notes of the CD, he describes the various challenges he has been dealing with, bringing his listeners a deeper understanding of where the music comes from. In The Soft Light Of Grace is David Nevue’s sixteenth solo piano album (not counting compilations), and I have to say that I think it’s one of his best.

I have reviewed most of David’s albums (and have edited all of his sheet music) and I could tell right away that there was something different about this music. It feels freer, more expressive (not in a flashy way), and even more deeply personal. David says in the liner notes that with his previous album, Winding Down (2015), he set out to challenge himself as a composer and pianist to “elevate my work and create a collection of music unlike anything I had done before. In that, I accomplished what I set out to do.” He says that when it came time to start working on new music, that approach just didn’t work. He realized that the only way he could move forward was to stop “striving” so hard. “Once I stopped trying and started trusting, the music began to flow. Easily…like a river running through me.” Perhaps that’s the difference I am hearing.

The album begins with “Walking In Trust,” a beautifully introspective piece played at an easy walking pace that feels serene and very relaxed. The title track is also very quiet and much of it is played with the damper pedal down, giving it an ethereal feeling. At almost seven minutes, “Equilibrium” is the longest piece on the album. It begins with a quietly bittersweet melody that gradually builds, ebbing and flowing between gentle reflection and more powerful emotions. “The Wind Blows Where It Wishes” is a favorite with its freely changing tempo and expressive movement. “Where The Water Flows” is another favorite, conveying feelings of freedom and varying degrees of power while remaining peaceful. “Luminous” is almost ambient with sustained bass chords and lightly dancing notes in the upper end of the piano - very colorful and evocative. The second half of the piece is somewhat more rhythmic and melodic. This style is something new for Nevue, and I really like it! I love “Unshakeable,” a very gentle but upbeat piece that overflows with joy and optimism - my favorite piece on the album.

April 2, 2019
This review has been tagged as:
Kathy's Picks
David's Website David's Artist Page on MainlyPiano
Album Links
Amazon (referral)iTunes
This site contains affiliate links to products. We may receive a commission for purchases made through these links.
More reviews of David Nevue albums 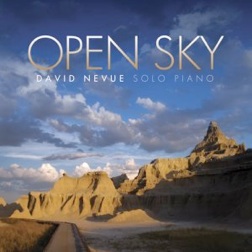 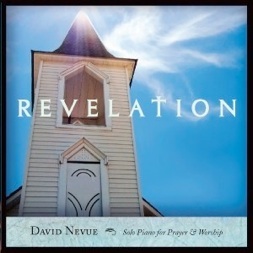