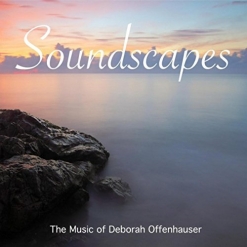 Deborah's Website Deborah's Artist Page on MainlyPiano
Album Links
Amazon (referral)iTunes
This site contains affiliate links to products. We may receive a commission for purchases made through these links.
Soundscapes
Deborah Offenhauser
2017 / Deborah Ann Offenhauser
66 minutes
Review by Kathy Parsons
Soundscapes is the eighth album from pianist/composer Deborah Offenhauser, an artist whose credits include playing with such diverse musicians as Isola Jones, The Moody Blues and Frankie Laine as well as having her music featured on TV shows like “Desperate Housewives,” “Madam Secretary” and “The Big Bang Theory.” Offenhauser’s music career spans more than thirty years and includes playing the piano for a number of touring Broadway shows as well as teaching. Soundscapes is my first experience (that I am aware of) with Offenhauser’s music, and I’m more than impressed with her versatility and the broad range of musical styles presented in the album’s thirteen tracks. Many of the pieces include nature sounds - birds, water, etc. - in addition to the piano and ensemble musicians. (I have to admit that I get a little tired of the nature sounds, but that’s just me.) Most pieces have an optimistic spirit and the majority of them are quite melodic. A few tracks are more abstract and atmospheric, but all thirteen have a colorful story to tell.

Soundscapes begins with “Decidedly Joyful,” one of my favorites on the album. Warm and relaxed with a smooth jazz vibe, the instrumentation includes piano, percussion, bass, flute and sax. Slinky, exotic and slightly mysterious, it’s a great opener! “Free Radical” begins quietly with a gentle rhythm, but about mid-way becomes much more vibrant and exciting and then returns to the quiet side with the sounds of water and birds as well as piano, strings, keyboard and light percussion. “Nothing Can Touch You Now” is very dreamy and atmospheric for the extended intro and then becomes a beautiful ballad for piano, strings, bass and light percussion - another favorite. “Irrational Exuberance” (great title!) is bright and, well, exuberant! Strings and flute join the piano in a playful exchange that expresses the pure joy of making music. “Tanz” takes on an Eastern vibe with gongs and other exotic instruments along with keyboard, piano, strings and voices. “Rosemont Theme” is a lovely piece for piano, strings, oboe and guitar. Graceful and often poignant, I really like this one, too! “Air” begins as an acoustic guitar solo, becoming a classically-styled duet with the piano, and later adding cello for an even more classical sound. “The Gloaming” is darker and more abstract — sounding like it would be appropriate in a scary movie. There are lots of sound effects in this one plus piano, cello, and a variety of percussion instruments. It shows another aspect of Offenhauser’s composing abilities, but it’s kind of weird! “It Is Written” is much calmer and more peaceful, with sounds of the ocean, guitar and orchestral instrumentation. The piano joins the ensemble later in the piece, which could easily be part of a soundtrack - also a favorite. “Tanninim (Sea Creatures)” is interesting and would probably be really effective with visuals, but is kind of dark and murky without them. “The Wonderful Unfoldment” also has a soundtrack feeling with soulful oboe and cello leading the way over other strings - a peaceful close to the album.

Soundscapes is a great introduction to the music of Deborah Offenhauser! It is available from Amazon, iTunes and CD Baby. Check it out!

January 27, 2018
Deborah's Website Deborah's Artist Page on MainlyPiano
Album Links
Amazon (referral)iTunes
This site contains affiliate links to products. We may receive a commission for purchases made through these links.